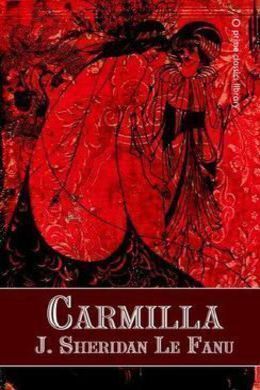 Living a lonely existence in a remote schloss in Styria, on the border of Austria and Hungary, Laura and her father play host to an unexpected guest, the beautiful young Carmilla. Her arrival is closely followed by an outbreak of unexplained deaths in the area, while the young women’s growing friendship coincides with a series of nightmares and mysterious nocturnal visitations, and a gradual downward spiral in Laura’s health. A chilling tale of the un-dead, Carmilla is a beautifully written example of the gothic genre. Believed to be the inspiration for Bram Stoker’s gothic masterpiece ‘Dracula’, written over twenty years later, Carmilla stands out as an all-time horror classic.

In Styria, we, though by no means magnificent people, inhabit a castle, or schloss. A small income, in that part of the world, goes a great way. Eight or nine hundred a year does wonders. Scantily enough ours would have answered among wealthy people at home. My father is English, and I bear an English name, although I never saw England. But here, in this lonely and primitive place, where everything is so marvelously cheap, I really don’t see how ever so much more money would at all materially add to our comforts, or even luxuries.

My father was in the Austrian service, and retired upon a pension and his patrimony, and purchased this feudal residence, and the small estate on which it stands, a bargain.

Nothing can be more picturesque or solitary. It stands on a slight eminence in a forest. The road, very old and narrow, passes in front of its drawbridge, never raised in my time, and its moat, stocked with perch, and sailed over by many swans, and floating on its surface white fleets of water lilies.

Over all this the schloss shows its many-windowed front; its towers, and its Gothic chapel.

The forest opens in an irregular and very picturesque glade before its gate, and at the right a steep Gothic bridge carries the road over a stream that winds in deep shadow through the wood. I have said that this is a very lonely place. Judge whether I say truth. Looking from the hall door towards the road, the forest in which our castle stands extends fifteen miles to the right, and twelve to the left. The nearest inhabited village is about seven of your English miles to the left. The nearest inhabited schloss of any historic associations, is that of old General Spielsdorf, nearly twenty miles away to the right.

I have said “the nearest inhabited village,” because there is, only three miles westward, that is to say in the direction of General Spielsdorf’s schloss, a ruined village, with its quaint little church, now roofless, in the aisle of which are the moldering tombs of the proud family of Karnstein, now extinct, who once owned the equally desolate chateau which, in the thick of the forest, overlooks the silent ruins of the town.

Respecting the cause of the desertion of this striking and melancholy spot, there is a legend which I shall relate to you another time.

I must tell you now, how very small is the party who constitute the inhabitants of our castle. I don’t include servants, or those dependents who occupy rooms in the buildings attached to the schloss. Listen, and wonder! My father, who is the kindest man on earth, but growing old; and I, at the date of my story, only nineteen. Eight years have passed since then.

I and my father constituted the family at the schloss. My mother, a Styrian lady, died in my infancy, but I had a good-natured governess, who had been with me from, I might almost say, my infancy. I could not remember the time when her fat, benignant face was not a familiar picture in my memory.

This was Madame Perrodon, a native of Berne, whose care and good nature now in part supplied to me the loss of my mother, whom I do not even remember, so early I lost her. She made a third at our little dinner party. There was a fourth, Mademoiselle De Lafontaine, a lady such as you term, I believe, a “finishing governess.” She spoke French and German, Madame Perrodon French and broken English, to which my father and I added English, which, partly to prevent its becoming a lost language among us, and partly from patriotic motives, we spoke every day. The consequence was a Babel, at which strangers used to laugh, and which I shall make no attempt to reproduce in this narrative. And there were two or three young lady friends besides, pretty nearly of my own age, who were occasional visitors, for longer or shorter terms; and these visits I sometimes returned.

These were our regular social resources; but of course there were chance visits from “neighbors” of only five or six leagues distance. My life was, notwithstanding, rather a solitary one, I can assure you.

My gouvernantes had just so much control over me as you might conjecture such sage persons would have in the case of a rather spoiled girl, whose only parent allowed her pretty nearly her own way in everything.

The first occurrence in my existence, which produced a terrible impression upon my mind, which, in fact, never has been effaced, was one of the very earliest incidents of my life which I can recollect. Some people will think it so trifling that it should not be recorded here. You will see, however, by-and-by, why I mention it. The nursery, as it was called, though I had it all to myself, was a large room in the upper story of the castle, with a steep oak roof. I can’t have been more than six years old, when one night I awoke, and looking round the room from my bed, failed to see the nursery maid. Neither was my nurse there; and I thought myself alone.