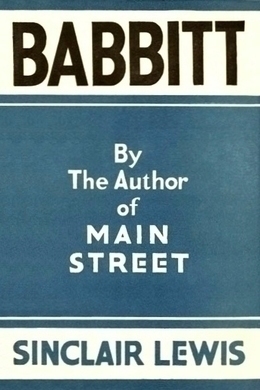 In this sardonic portrait of the up-and-coming middle class during the prosperous 1920s, Sinclair Lewis perfectly captures the sound, the feel, and the attitudes of the generation that created the cult of consumerism. With a sharp eye for detail and keen powers of observation, Lewis tracks successful realtor George Babbitt’s daily struggles to rise to the top of his profession while maintaining his reputation as an upstanding family man. On the surface, Babbitt appears to be the quintessential middle-class embodiment of conservative values and enthusiasm for the well-to-do lifestyle of the small entrepreneur. But beneath the complacent facade, he also experiences a rising, nameless discontent. These feelings eventually lead Babbitt into risky escapades that threaten his family and his standing in the community.

The towers of Zenith aspired above the morning mist; austere towers of steel and cement and limestone, sturdy as cliffs and delicate as silver rods. They were neither citadels nor churches, but frankly and beautifully office-buildings.

The mist took pity on the fretted structures of earlier generations: the Post Office with its shingle-tortured mansard, the red brick minarets of hulking old houses, factories with stingy and sooted windows, wooden tenements colored like mud. The city was full of such grotesqueries, but the clean towers were thrusting them from the business center, and on the farther hills were shining new houses, homes–they seemed–for laughter and tranquillity.

Over a concrete bridge fled a limousine of long sleek hood and noiseless engine. These people in evening clothes were returning from an all-night rehearsal of a Little Theater play, an artistic adventure considerably illuminated by champagne. Below the bridge curved a railroad, a maze of green and crimson lights. The New York Flyer boomed past, and twenty lines of polished steel leaped into the glare.

In one of the skyscrapers the wires of the Associated Press were closing down. The telegraph operators wearily raised their celluloid eye-shades after a night of talking with Paris and Peking. Through the building crawled the scrubwomen, yawning, their old shoes slapping. The dawn mist spun away. Cues of men with lunch-boxes clumped toward the immensity of new factories, sheets of glass and hollow tile, glittering shops where five thousand men worked beneath one roof, pouring out the honest wares that would be sold up the Euphrates and across the veldt. The whistles rolled out in greeting a chorus cheerful as the April dawn; the song of labor in a city built–it seemed–for giants.

There was nothing of the giant in the aspect of the man who was beginning to awaken on the sleeping-porch of a Dutch Colonial house in that residential district of Zenith known as Floral Heights.

His name was George F. Babbitt. He was forty-six years old now, in April, 1920, and he made nothing in particular, neither butter nor shoes nor poetry, but he was nimble in the calling of selling houses for more than people could afford to pay.

His large head was pink, his brown hair thin and dry. His face was babyish in slumber, despite his wrinkles and the red spectacle-dents on the slopes of his nose. He was not fat but he was exceedingly well fed; his cheeks were pads, and the unroughened hand which lay helpless upon the khaki-colored blanket was slightly puffy. He seemed prosperous, extremely married and unromantic; and altogether unromantic appeared this sleeping-porch, which looked on one sizable elm, two respectable grass-plots, a cement driveway, and a corrugated iron garage. Yet Babbitt was again dreaming of the fairy child, a dream more romantic than scarlet pagodas by a silver sea.

For years the fairy child had come to him. Where others saw but Georgie Babbitt, she discerned gallant youth. She waited for him, in the darkness beyond mysterious groves. When at last he could slip away from the crowded house he darted to her. His wife, his clamoring friends, sought to follow, but he escaped, the girl fleet beside him, and they crouched together on a shadowy hillside. She was so slim, so white, so eager! She cried that he was gay and valiant, that she would wait for him, that they would sail–

Rumble and bang of the milk-truck.

Babbitt moaned; turned over; struggled back toward his dream. He could see only her face now, beyond misty waters. The furnace-man slammed the basement door. A dog barked in the next yard. As Babbitt sank blissfully into a dim warm tide, the paper-carrier went by whistling, and the rolled-up Advocate thumped the front door. Babbitt roused, his stomach constricted with alarm. As he relaxed, he was pierced by the familiar and irritating rattle of some one cranking a Ford: snap-ah-ah, snap-ah-ah, snap-ah-ah. Himself a pious motorist, Babbitt cranked with the unseen driver, with him waited through taut hours for the roar of the starting engine, with him agonized as the roar ceased and again began the infernal patient snap-ah-ah–a round, flat sound, a shivering cold-morning sound, a sound infuriating and inescapable. Not till the rising voice of the motor told him that the Ford was moving was he released from the panting tension. He glanced once at his favorite tree, elm twigs against the gold patina of sky, and fumbled for sleep as for a drug. He who had been a boy very credulous of life was no longer greatly interested in the possible and improbable adventures of each new day.

He escaped from reality till the alarm-clock rang, at seven-twenty.