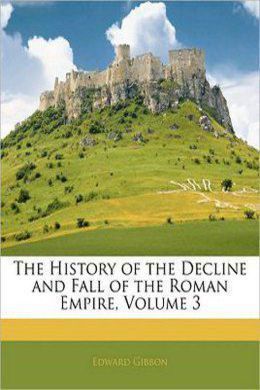 Decline and Fall of the Roman Empire Vol. 3

series: The History of the Decline and Fall of the Roman Empire (#3)

In this third of volume, readers will discover the rules of Jovian, Valentinian, Valens, Gratian, Theodosius, Arcadius, Honorius, Eutropius, and Valentinian III; wars in Germany, Britain, Africa, and Persia; the Gothic War in 376; the conversion of Rome; the revolt of the Goths; the numerous sackings of Rome by the Goths and Charles V; revolutions in Gaul and Spain; the life of Saint John Chrysostom; the life of Empress Eudocia; the progress of the Vandals in Africa; and the invasion of the Roman Empire by Attila the Hun. Edward Gibbon’s Decline and Fall of the Roman Empire compresses thirteen turbulent centuries into an epic narrative shot through with insight, irony and incisive character analysis. Sceptical about Christianity, sympathetic to the barbarian invaders and the Byzantine Empire, constantly aware of how political leaders often achieve the exact opposite of what they intend.

The fame of Gratian, before he had accomplished the twentieth year of his age, was equal to that of the most celebrated princes. His gentle and amiable disposition endeared him to his private friends, the graceful affability of his manners engaged the affection of the people: the men of letters, who enjoyed the liberality, acknowledged the taste and eloquence, of their sovereign; his valor and dexterity in arms were equally applauded by the soldiers; and the clergy considered the humble piety of Gratian as the first and most useful of his virtues. The victory of Colmar had delivered the West from a formidable invasion; and the grateful provinces of the East ascribed the merits of Theodosius to the author of his greatness, and of the public safety. Gratian survived those memorable events only four or five years; but he survived his reputation; and, before he fell a victim to rebellion, he had lost, in a great measure, the respect and confidence of the Roman world.

The remarkable alteration of his character or conduct may not be imputed to the arts of flattery, which had besieged the son of Valentinian from his infancy; nor to the headstrong passions which the that gentle youth appears to have escaped. A more attentive view of the life of Gratian may perhaps suggest the true cause of the disappointment of the public hopes. His apparent virtues, instead of being the hardy productions of experience and adversity, were the premature and artificial fruits of a royal education. The anxious tenderness of his father was continually employed to bestow on him those advantages, which he might perhaps esteem the more highly, as he himself had been deprived of them; and the most skilful masters of every science, and of every art, had labored to form the mind and body of the young prince. The knowledge which they painfully communicated was displayed with ostentation, and celebrated with lavish praise. His soft and tractable disposition received the fair impression of their judicious precepts, and the absence of passion might easily be mistaken for the strength of reason. His preceptors gradually rose to the rank and consequence of ministers of state: and, as they wisely dissembled their secret authority, he seemed to act with firmness, with propriety, and with judgment, on the most important occasions of his life and reign. But the influence of this elaborate instruction did not penetrate beyond the surface; and the skilful preceptors, who so accurately guided the steps of their royal pupil, could not infuse into his feeble and indolent character the vigorous and independent principle of action which renders the laborious pursuit of glory essentially necessary to the happiness, and almost to the existence, of the hero. As soon as time and accident had removed those faithful counsellors from the throne, the emperor of the West insensibly descended to the level of his natural genius; abandoned the reins of government to the ambitious hands which were stretched forwards to grasp them; and amused his leisure with the most frivolous gratifications. A public sale of favor and injustice was instituted, both in the court and in the provinces, by the worthless delegates of his power, whose merit it was made sacrilege to question. The conscience of the credulous prince was directed by saints and bishops; who procured an Imperial edict to punish, as a capital offence, the violation, the neglect, or even the ignorance, of the divine law. Among the various arts which had exercised the youth of Gratian, he had applied himself, with singular inclination and success, to manage the horse, to draw the bow, and to dart the javelin; and these qualifications, which might be useful to a soldier, were prostituted to the viler purposes of hunting. Large parks were enclosed for the Imperial pleasures, and plentifully stocked with every species of wild beasts; and Gratian neglected the duties, and even the dignity, of his rank, to consume whole days in the vain display of his dexterity and boldness in the chase. The pride and wish of the Roman emperor to excel in an art, in which he might be surpassed by the meanest of his slaves, reminded the numerous spectators of the examples of Nero and Commodus, but the chaste and temperate Gratian was a stranger to their monstrous vices; and his hands were stained only with the blood of animals. The behavior of Gratian, which degraded his character in the eyes of mankind, could not have disturbed the security of his reign, if the army had not been provoked to resent their peculiar injuries.