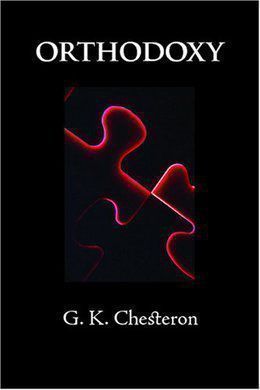 This book is meant to be a companion to “Heretics,” and to put the positive side in addition to the negative. Many critics complained of the book called “Heretics” because it merely criticised current philosophies without offering any alternative philosophy. This book is an attempt to answer the challenge. It is unavoidably affirmative and therefore unavoidably autobiographical. The writer has been driven back upon somewhat the same difficulty as that which beset Newman in writing his Apologia; he has been forced to be egotistical only in order to be sincere. While everything else may be different the motive in both cases is the same. It is the purpose of the writer to attempt an explanation, not of whether the Christian Faith can be believed, but of how he personally has come to believe it. The book is therefore arranged upon the positive principle of a riddle and its answer. It deals first with all the writer’s own solitary and sincere speculations and then with all the startling style in which they were all suddenly satisfied by the Christian Theology. The writer regards it as amounting to a convincing creed. But if it is not that it is at least a repeated and surprising coincidence.

The only possible excuse for this book is that it is an answer to a challenge. Even a bad shot is dignified when he accepts a duel. When some time ago I published a series of hasty but sincere papers, under the name of “Heretics,” several critics for whose intellect I have a warm respect (I may mention specially Mr. G.S. Street) said that it was all very well for me to tell everybody to affirm his cosmic theory, but that I had carefully avoided supporting my precepts with example. “I will begin to worry about my philosophy,” said Mr. Street, “when Mr. Chesterton has given us his.” It was perhaps an incautious suggestion to make to a person only too ready to write books upon the feeblest provocation. But after all, though Mr. Street has inspired and created this book, he need not read it. If he does read it, he will find that in its pages I have attempted in a vague and personal way, in a set of mental pictures rather than in a series of deductions, to state the philosophy in which I have come to believe. I will not call it my philosophy; for I did not make it. God and humanity made it; and it made me.

I have often had a fancy for writing a romance about an English yachtsman who slightly miscalculated his course and discovered England under the impression that it was a new island in the South Seas. I always find, however, that I am either too busy or too lazy to write this fine work, so I may as well give it away for the purposes of philosophical illustration. There will probably be a general impression that the man who landed (armed to the teeth and talking by signs) to plant the British flag on that barbaric temple which turned out to be the Pavilion at Brighton, felt rather a fool. I am not here concerned to deny that he looked a fool. But if you imagine that he felt a fool, or at any rate that the sense of folly was his sole or his dominant emotion, then you have not studied with sufficient delicacy the rich romantic nature of the hero of this tale. His mistake was really a most enviable mistake; and he knew it, if he was the man I take him for. What could be more delightful than to have in the same few minutes all the fascinating terrors of going abroad combined with all the humane security of coming home again? What could be better than to have all the fun of discovering South Africa without the disgusting necessity of landing there? What could be more glorious than to brace one’s self up to discover New South Wales and then realize, with a gush of happy tears, that it was really old South Wales. This at least seems to me the main problem for philosophers, and is in a manner the main problem of this book. How can we contrive to be at once astonished at the world and yet at home in it? How can this queer cosmic town, with its many–legged citizens, with its monstrous and ancient lamps, how can this world give us at once the fascination of a strange town and the comfort and honour of being our own town? To show that a faith or a philosophy is true from every standpoint would be too big an undertaking even for a much bigger book than this; it is necessary to follow one path of argument; and this is the path that I here propose to follow. I wish to set forth my faith as particularly answering this double spiritual need, the need for that mixture of the familiar and the unfamiliar which Christendom has rightly named romance. For the very word “romance” has in it the mystery and ancient meaning of Rome. Any one setting out to dispute anything ought always to begin by saying what he does not dispute. Beyond stating what he proposes to prove he should always state what he does not propose to prove. The thing I do not propose to prove, the thing I propose to take as common ground between myself and any average reader, is this desirability of an active and imaginative life, picturesque and full of a poetical curiosity, a life such as western man at any rate always seems to have desired. If a man says that extinction is better than existence or blank existence better than variety and adventure, then he is not one of the ordinary people to whom I am talking. If a man prefers nothing I can give him nothing. But nearly all people I have ever met in this western society in which I live would agree to the general proposition that we need this life of practical romance; the combination of something that is strange with something that is secure. We need so to view the world as to combine an idea of wonder and an idea of welcome. We need to be happy in this wonderland without once being merely comfortable. It is this achievement of my creed that I shall chiefly pursue in these pages.