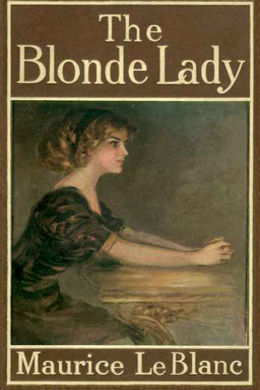 LeBlanc’s creation, gentleman thief Arsene Lupin, is everything you would expect from a French aristocrat – witty, charming, brilliant, sly . . . and possibly the greatest thief in the world. In this classic tale, Lupin comes up against the only man who may be able to stop him . . . no less than the great British gentleman-detective Herlock Sholmes! Who will emerge triumphant?

Please note: The Blonde Lady was released in the UK under the title Arsene Lupin vs. Herlock Sholmes; both are the same story.

On the 8th of December last, M. Gerbois, professor of mathematics at Versailles College, rummaging among the stores at a second-hand dealer’s, discovered a small mahogany writing-desk, which took his fancy because of its many drawers.

“That’s just what I want for Suzanne’s birthday,” he thought.

M. Gerbois’ means were limited and, anxious as he was to please his daughter, he felt it his duty to beat the dealer down. He ended by paying sixty-five francs. As he was writing down his address, a well-groomed and well-dressed young man, who had been hunting through the shop in every direction, caught sight of the writing-desk and asked:

“How much for this?”

M. Gerbois bowed and, feeling all the happier that one of his fellow-men envied him his purchase, left the shop. But he had not taken ten steps in the street before the young man caught him up and, raising his hat, said, very politely:

“I beg a thousand pardons, sir…. I am going to ask you an indiscreet question…. Were you looking for this desk rather than anything else?”

“No. I went to the shop to see if I could find a cheap set of scales for my experiments.”

“Therefore, you do not want it very particularly?”

“Because it’s old I suppose?”

“In that case, would you mind exchanging it for another desk, quite as useful, but in better condition?”

“This one is in good condition and I see no point in exchanging it.”

M. Gerbois was a man easily irritated and quick to take offense. He replied curtly:

“I must ask you to drop the subject, sir.”

The young man placed himself in front of him.

“I don’t know how much you paid, sir … but I offer you double the price.”

“Oh, that will do,” exclaimed the professor, impatiently. “The desk belongs to me and is not for sale.”

The young man stared at him with a look that remained imprinted on M. Gerbois’ memory, then turned on his heel, without a word, and walked away.

An hour later, the desk was brought to the little house on the Viroflay Road where the professor lived. He called his daughter:

Suzanne was a pretty creature, of a demonstrative temperament and easily pleased. She threw her arms round her father’s neck and kissed him as rapturously as though he had made her a present fit for a queen.

That evening, assisted by Hortense the maid, she carried up the desk to her room, cleaned out the drawers and neatly put away her papers, her stationery, her correspondence, her picture postcards and a few secret souvenirs of her cousin Philippe.

M. Gerbois went to the college at half-past seven the next morning. At ten o’clock Suzanne, according to her daily custom, went to meet him at the exit; and it was a great pleasure to him to see her graceful, smiling figure waiting on the pavement opposite the gate.

They walked home together.

“Oh, it’s lovely! Hortense and I have polished up the brass handles till they shine like gold.”

“So you’re pleased with it?”

“I should think so! I don’t know how I did without it all this time.”

They walked up the front garden. The professor said:

“Let’s go and look at it before lunch.”

She went up the stairs first, but, on reaching the door of her room, she gave a cry of dismay.

He followed her into the room. The writing-desk was gone.

What astonished the police was the wonderful simplicity of the means employed. While Suzanne was out and the maid making her purchases for the day, a ticket-porter, wearing his badge, had stopped his cart before the garden, in sight of the neighbours, and rung the bell twice. The neighbours, not knowing that the servant had left the house, suspected nothing, so that the man was able to effect his object absolutely undisturbed.

This fact must be noted: not a cupboard had been broken open, not so much as a clock displaced. Even Suzanne’s purse, which she had left on the marble slab of the desk, was found on the adjacent table, with the gold which it contained. The object of the theft was clearly determined, therefore, and this made it the more difficult to understand; for, after all, why should a man run so great a risk to secure so trivial a spoil?

The only clue which the professor could supply was the incident of the day before:

“From the first, that young man displayed a keen annoyance at my refusal; and I have a positive impression that he left me under a threat.”