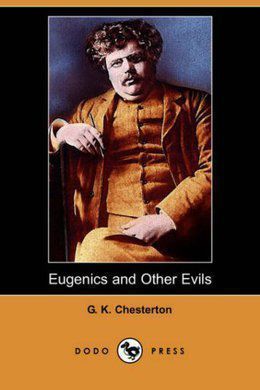 Eugenics and Other Evils

G. K. Chesterton was an early critic of the philosophy of eugenics, expressing this opinion in his book, Eugenics and Other Evils. Its advocates regarded eugenics as a social philosophy for the improvement of human hereditary traits through various forms of intervention.Today it is widely regarded as a brutal movement which inflicted massive human rights violations on millions of people.HIs criticism of Eugenics expands into a more general criticism of a modern craze for scientific officialism and strict social organization.Chesterton’s writings consistently displayed wit and a sense of humour. He employed paradox, while making serious comments on the world, government, politics, economics, philosophy, theology and many other topics.

The wisest thing in the world is to cry out before you are hurt. It is no good to cry out after you are hurt; especially after you are mortally hurt. People talk about the impatience of the populace; but sound historians know that most tyrannies have been possible because men moved too late. It is often essential to resist a tyranny before it exists. It is no answer to say, with a distant optimism, that the scheme is only in the air. A blow from a hatchet can only be parried while it is in the air.

There exists to–day a scheme of action, a school of thought, as collective and unmistakable as any of those by whose grouping alone we can make any outline of history. It is as firm a fact as the Oxford Movement, or the Puritans of the Long Parliament; or the Jansenists; or the Jesuits. It is a thing that can be pointed out; it is a thing that can be discussed; and it is a thing that can still be destroyed. It is called for convenience “Eugenics”; and that it ought to be destroyed I propose to prove in the pages that follow. I know that it means very different things to different people; but that is only because evil always takes advantage of ambiguity. I know it is praised with high professions of idealism and benevolence; with silver–tongued rhetoric about purer motherhood and a happier posterity. But that is only because evil is always flattered, as the Furies were called “The Gracious Ones.” I know that it numbers many disciples whose intentions are entirely innocent and humane; and who would be sincerely astonished at my describing it as I do. But that is only because evil always wins through the strength of its splendid dupes; and there has in all ages been a disastrous alliance between abnormal innocence and abnormal sin. Of these who are deceived I shall speak of course as we all do of such instruments; judging them by the good they think they are doing, and not by the evil which they really do. But Eugenics itself does exist for those who have sense enough to see that ideas exist; and Eugenics itself, in large quantities or small, coming quickly or coming slowly, urged from good motives or bad, applied to a thousand people or applied to three, Eugenics itself is a thing no more to be bargained about than poisoning.

It is not really difficult to sum up the essence of Eugenics: though some of the Eugenists seem to be rather vague about it. The movement consists of two parts: a moral basis, which is common to all, and a scheme of social application which varies a good deal. For the moral basis, it is obvious that man’s ethical responsibility varies with his knowledge of consequences. If I were in charge of a baby (like Dr. Johnson in that tower of vision), and if the baby was ill through having eaten the soap, I might possibly send for a doctor. I might be calling him away from much more serious cases, from the bedsides of babies whose diet had been far more deadly; but I should be justified. I could not be expected to know enough about his other patients to be obliged (or even entitled) to sacrifice to them the baby for whom I was primarily and directly responsible. Now the Eugenic moral basis is this; that the baby for whom we are primarily and directly responsible is the babe unborn. That is, that we know (or may come to know) enough of certain inevitable tendencies in biology to consider the fruit of some contemplated union in that direct and clear light of conscience which we can now only fix on the other partner in that union. The one duty can conceivably be as definite as or more definite than the other. The baby that does not exist can be considered even before the wife who does. Now it is essential to grasp that this is a comparatively new note in morality. Of course sane people always thought the aim of marriage was the procreation of children to the glory of God or according to the plan of Nature; but whether they counted such children as God’s reward for service or Nature’s premium on sanity, they always left the reward to God or the premium to Nature, as a less definable thing. The only person (and this is the point) towards whom one could have precise duties was the partner in the process. Directly considering the partner’s claims was the nearest one could get to indirectly considering the claims of posterity. If the women of the harem sang praises of the hero as the Moslem mounted his horse, it was because this was the due of a man; if the Christian knight helped his wife off her horse, it was because this was the due of a woman. Definite and detailed dues of this kind they did not predicate of the babe unborn; regarding him in that agnostic and opportunist light in which Mr. Browdie regarded the hypothetical child of Miss Squeers.