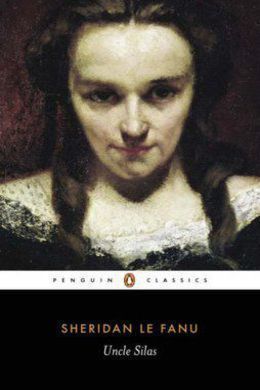 In Uncle Silas, Sheridan Le Fanu’s most celebrated novel, Maud Ruthyn, the young, naïve heroine, is plagued by Madame de la Rougierre from the moment the enigmatic older woman is hired as her governess. A liar, bully, and spy, when Madame leaves the house, she takes her dark secret with her. But when Maud is orphaned, she is sent to live with her Uncle Silas, her father’s mysterious brother and a man with a scandalous-even murderous-past. And, once again, she encounters Madame, whose sinister role in Maud’s destiny becomes all too clear. With its subversion of reality and illusion, and its exploration of fear through the use of mystery and the supernatural, Uncle Silas shuns the conventions of traditional horror and delivers a chilling psychological thriller.

It was winter–that is, about the second week in November–and great gusts were rattling at the windows, and wailing and thundering among our tall trees and ivied chimneys–a very dark night, and a very cheerful fire blazing, a pleasant mixture of good round coal and spluttering dry wood, in a genuine old fireplace, in a sombre old room. Black wainscoting glimmered up to the ceiling, in small ebony panels; a cheerful clump of wax candles on the tea-table; many old portraits, some grim and pale, others pretty, and some very graceful and charming, hanging from the walls. Few pictures, except portraits long and short, were there. On the whole, I think you would have taken the room for our parlour. It was not like our modern notion of a drawing-room. It was a long room too, and every way capacious, but irregularly shaped.

A girl, of a little more than seventeen, looking, I believe, younger still; slight and rather tall, with a great deal of golden hair, dark grey-eyed, and with a countenance rather sensitive and melancholy, was sitting at the tea-table, in a reverie. I was that girl.

The only other person in the room–the only person in the house related to me–was my father. He was Mr. Ruthyn, of Knowl, so called in his county, but he had many other places, was of a very ancient lineage, who had refused a baronetage often, and it was said even a viscounty, being of a proud and defiant spirit, and thinking themselves higher in station and purer of blood than two-thirds of the nobility into whose ranks, it was said, they had been invited to enter. Of all this family lore I knew but little and vaguely; only what is to be gathered from the fireside talk of old retainers in the nursery.

I am sure my father loved me, and I know I loved him. With the sure instinct of childhood I apprehended his tenderness, although it was never expressed in common ways. But my father was an oddity. He had been early disappointed in Parliament, where it was his ambition to succeed. Though a clever man, he failed there, where very inferior men did extremely well. Then he went abroad, and became a connoisseur and a collector; took a part, on his return, in literary and scientific institutions, and also in the foundation and direction of some charities. But he tired of this mimic government, and gave himself up to a country life, not that of a sportsman, but rather of a student, staying sometimes at one of his places and sometimes at another, and living a secluded life.

Rather late in life he married, and his beautiful young wife died, leaving me, their only child, to his care. This bereavement, I have been told, changed him–made him more odd and taciturn than ever, and his temper also, except to me, more severe. There was also some disgrace about his younger brother–my uncle Silas–which he felt bitterly.

He was now walking up and down this spacious old room, which, extending round an angle at the far end, was very dark in that quarter. It was his wont to walk up and down thus, without speaking–an exercise which used to remind me of Chateaubriand’s father in the great chamber of the Château de Combourg. At the far end he nearly disappeared in the gloom, and then returning emerged for a few minutes, like a portrait with a background of shadow, and then again in silence faded nearly out of view.

This monotony and silence would have been terrifying to a person less accustomed to it than I. As it was, it had its effect. I have known my father a whole day without once speaking to me. Though I loved him very much, I was also much in awe of him.

While my father paced the floor, my thoughts were employed about the events of a month before. So few things happened at Knowl out of the accustomed routine, that a very trifling occurrence was enough to set people wondering and conjecturing in that serene household. My father lived in remarkable seclusion; except for a ride, he hardly ever left the grounds of Knowl; and I don’t think it happened twice in the year that a visitor sojourned among us.

There was not even that mild religious bustle which sometimes besets the wealthy and moral recluse. My father had left the Church of England for some odd sect, I forget its name, and ultimately became, I was told, a Swedenborgian. But he did not care to trouble me upon the subject. So the old carriage brought my governess, when I had one, the old housekeeper, Mrs. Rusk, and myself to the parish church every Sunday. And my father, in the view of the honest rector who shook his head over him–‘a cloud without water, carried about of winds, and a wandering star to whom is reserved the blackness of darkness’–corresponded with the ‘minister’ of his church, and was provokingly contented with his own fertility and illumination; and Mrs. Rusk, who was a sound and bitter churchwoman, said he fancied he saw visions and talked with angels like the rest of that ‘rubbitch.’