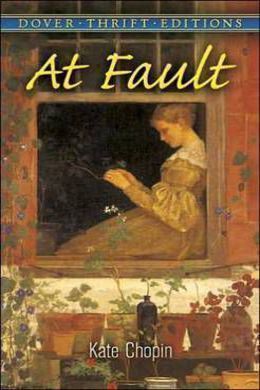 Thérèse Lafirme, a beautiful and resourceful Creole woman, is widowed at age thirty-two and left alone to run her Louisiana plantation. When Thérèse falls in love with David Hosmer, a divorced businessman, her strong moral and religious convictions make it impossible for her to accept his marriage proposal. Her determined rejection sets the two on a tumultuous path that involves Hosmer’s former wife, Fanny. At Fault is both romantic and filled with stark realism-a love story that expands to address the complex problem of balancing personal happiness and social duty-set in the post-Reconstruction South against a backdrop of economic devastation and simmering racial tensions. Written at the beginning of her career, At Fault parallels Chopin’s own life and introduces characters and themes that appear in her later works, including The Awakening.

When Jérôme Lafirme died, his neighbors awaited the results of his sudden taking off with indolent watchfulness. It was a matter of unusual interest to them that a plantation of four thousand acres had been left unincumbered to the disposal of a handsome, inconsolable, childless Creole widow of thirty. A bêtise of some sort might safely be looked for. But time passing, the anticipated folly failed to reveal itself; and the only wonder was that Thérèse Lafirme so successfully followed the methods of her departed husband.

Of course Thérèse had wanted to die with her Jérôme, feeling that life without him held nothing that could reconcile her to its further endurance. For days she lived alone with her grief; shutting out the appeals that came to her from the demoralized “hands,” and unmindful of the disorder that gathered about her. Till Uncle Hiram came one day with a respectful tender of sympathy, offered in the guise of a reckless misquoting of Scripture–and with a grievance.

“Mistuss,” he said, “I ’lowed ’twar best to come to de house an’ tell you; fur Massa he alluz did say ‘Hi’urm, I counts on you to keep a eye open endurin’ my appersunce;’ you ricollic, marm?” addressing an expanse of black bordered cambric that veiled the features of his mistress. “Things is a goin’ wrong; dat dey is. I don’t wants to name no names ’doubt I’se ’bleeged to; but dey done start a kiarrin’ de cotton seed off de place, and dats how.”

If Hiram’s information had confined itself to the bare statement of things “goin’ wrong,” such intimation, of its nature vague and susceptible of uncertain interpretation, might have failed to rouse Thérèse from her lethargy of grief. But that wrong doing presented as a tangible abuse and defiance of authority, served to move her to action. She felt at once the weight and sacredness of a trust, whose acceptance brought consolation and awakened unsuspected powers of doing.

In spite of Uncle Hiram’s parting prediction “de cotton ’ll be a goin’ naxt” no more seed was hauled under cover of darkness from Place-du-Bois.

The short length of this Louisiana plantation stretched along Cane River, meeting the water when that stream was at its highest, with a thick growth of cotton-wood trees; save where a narrow convenient opening had been cut into their midst, and where further down the pine hills started in abrupt prominence from the water and the dead level of land on either side of them. These hills extended in a long line of gradual descent far back to the wooded borders of Lac du Bois; and within the circuit which they formed on the one side, and the irregular half circle of a sluggish bayou on the other, lay the cultivated open ground of the plantation–rich in its exhaustless powers of reproduction.

Among changes which the railroad brought soon after Jérôme Lafirme’s death, and which were viewed by many as of questionable benefit, was one which drove Thérèse to seek another domicile. The old homestead that nestled to the hill side and close to the water’s edge, had been abandoned to the inroads of progressive civilization; and Mrs. Lafirme had rebuilt many rods away from the river and beyond sight of the mutilated dwelling, converted now into a section house. In building, she avoided the temptations offered by modern architectural innovations, and clung to the simplicity of large rooms and broad verandas: a style whose merits had stood the test of easy-going and comfort-loving generations.

The negro quarters were scattered at wide intervals over the land, breaking with picturesque irregularity into the systematic division of field from field; and in the early spring-time gleaming in their new coat of whitewash against the tender green of the sprouting cotton and corn.

Thérèse loved to walk the length of the wide verandas, armed with her field-glass, and to view her surrounding possessions with comfortable satisfaction. Then her gaze swept from cabin to cabin; from patch to patch; up to the pine-capped hills, and down to the station which squatted a brown and ugly intruder within her fair domain.

She had made pouting resistance to this change at first, opposing it step by step with a conservatism that yielded only to the resistless. She pictured a visionary troop of evils coming in the wake of the railroad, which, in her eyes no conceivable benefits could mitigate. The occasional tramp, she foresaw as an army; and the travelers whom chance deposited at the store that adjoined the station, she dreaded as an endless procession of intruders forcing themselves upon her privacy.

Grégoire, the young nephew of Mrs. Lafirme, whose duty on the plantation was comprehended in doing as he was bid, qualified by a propensity for doing as he liked, rode up from the store one day in the reckless fashion peculiar to Southern youth, breathless with the information that a stranger was there wishing audience with her.