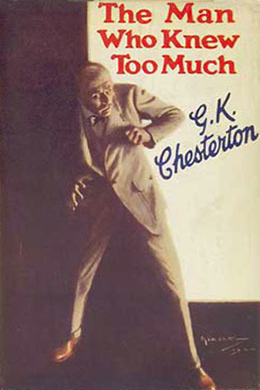 The Man Who Knew Too Much

Horne Fisher is the man who ‘knows too much…and all the wrong things’. He and his trusty companion Harold March take on the world of crime among societies most eminent members in eight classic mysteries. Fisher has a brilliant mind and powers of deduction - but he always faces a moral dilemma.

Harold March, the rising reviewer and social critic, was walking vigorously across a great tableland of moors and commons, the horizon of which was fringed with the far-off woods of the famous estate of Torwood Park. He was a good-looking young man in tweeds, with very pale curly hair and pale clear eyes. Walking in wind and sun in the very landscape of liberty, he was still young enough to remember his politics and not merely try to forget them. For his errand at Torwood Park was a political one; it was the place of appointment named by no less a person than the Chancellor of the Exchequer, Sir Howard Horne, then introducing his so-called Socialist budget, and prepared to expound it in an interview with so promising a penman. Harold March was the sort of man who knows everything about politics, and nothing about politicians. He also knew a great deal about art, letters, philosophy, and general culture; about almost everything, indeed, except the world he was living in.

Abruptly, in the middle of those sunny and windy flats, he came upon a sort of cleft almost narrow enough to be called a crack in the land. It was just large enough to be the water-course for a small stream which vanished at intervals under green tunnels of undergrowth, as if in a dwarfish forest. Indeed, he had an odd feeling as if he were a giant looking over the valley of the pygmies. When he dropped into the hollow, however, the impression was lost; the rocky banks, though hardly above the height of a cottage, hung over and had the profile of a precipice. As he began to wander down the course of the stream, in idle but romantic curiosity, and saw the water shining in short strips between the great gray boulders and bushes as soft as great green mosses, he fell into quite an opposite vein of fantasy. It was rather as if the earth had opened and swallowed him into a sort of underworld of dreams. And when he became conscious of a human figure dark against the silver stream, sitting on a large boulder and looking rather like a large bird, it was perhaps with some of the premonitions proper to a man who meets the strangest friendship of his life.

The man was apparently fishing; or at least was fixed in a fisherman’s attitude with more than a fisherman’s immobility. March was able to examine the man almost as if he had been a statue for some minutes before the statue spoke. He was a tall, fair man, cadaverous, and a little lackadaisical, with heavy eyelids and a highbridged nose. When his face was shaded with his wide white hat, his light mustache and lithe figure gave him a look of youth. But the Panama lay on the moss beside him; and the spectator could see that his brow was prematurely bald; and this, combined with a certain hollowness about the eyes, had an air of headwork and even headache. But the most curious thing about him, realized after a short scrutiny, was that, though he looked like a fisherman, he was not fishing.

He was holding, instead of a rod, something that might have been a landing-net which some fishermen use, but which was much more like the ordinary toy net which children carry, and which they generally use indifferently for shrimps or butterflies. He was dipping this into the water at intervals, gravely regarding its harvest of weed or mud, and emptying it out again.

“No, I haven’t caught anything,” he remarked, calmly, as if answering an unspoken query. “When I do I have to throw it back again; especially the big fish. But some of the little beasts interest me when I get ‘em.”

“Of a rather amateurish sort, I fear,” answered the strange fisherman. “I have a sort of hobby about what they call ‘phenomena of phosphorescence.’ But it would be rather awkward to go about in society carrying stinking fish.”

“I suppose it would,” said March, with a smile.

“Rather odd to enter a drawing-room carrying a large luminous cod,” continued the stranger, in his listless way. “How quaint it would be if one could carry it about like a lantern, or have little sprats for candles. Some of the seabeasts would really be very pretty like lampshades; the blue sea-snail that glitters all over like starlight; and some of the red starfish really shine like red stars. But, naturally, I’m not looking for them here.”

March thought of asking him what he was looking for; but, feeling unequal to a technical discussion at least as deep as the deep-sea fishes, he returned to more ordinary topics.

“Delightful sort of hole this is,” he said. “This little dell and river here. It’s like those places Stevenson talks about, where something ought to happen.”

“I know,” answered the other.