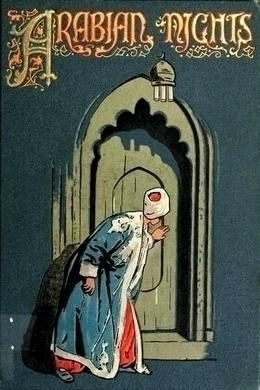 Full of mischief, valor, ribaldry, and romance, The Arabian Nights has enthralled readers for centuries. These are the tales that saved the life of Shahrazad, whose husband, the king, executed each of his wives after a single night of marriage. Beginning an enchanting story each evening, Shahrazad always withheld the ending: A thousand and one nights later, her life was spared forever. These tales, including Aladdin; or, the Wonderful Lamp, Sinbad the Seaman and Sinbad the Landsman, and Ali Baba and the Forty Thieves, have entered into the popular imagination, demonstrating that Shahrazad’s spell remains unbroken.

There was an emperor of Persia named Kosrouschah, who, when he first came to his crown, in order to obtain a knowledge of affairs, took great pleasure in night excursions, attended by a trusty minister. He often walked in disguise through the city, and met with many adventures, one of the most remarkable of which happened to him upon his first ramble, which was not long after his accession to the throne of his father.

After the ceremonies of his father’s funeral rites and his own inauguration were over, the new sultan, as well from inclination as from duty, went out one evening attended by his grand vizier, disguised like himself, to observe what was transacting in the city. As he was passing through a street in that part of the town inhabited only by the meaner sort, he heard some people talking very loud; and going close to the house whence the noise proceeded, and looking through a crack in the door, perceived a light, and three sisters sitting on a sofa, conversing together after supper. By what the eldest said he presently understood the subject of their conversation was wishes: “for,” said she, “since we are talking about wishes, mine shall be to have the sultan’s baker for my husband, for then I shall eat my fill of that bread, which by way of excellence is called the sultan’s; let us see if your tastes are as good as mine.” “For my part,” replied the second sister, “I wish I was wife to the sultan’s chief cook, for then I should eat of the most excellent dishes; and as I am persuaded that the sultan’s bread is common in the palace, I should not want any of that; therefore you see,” addressing herself to her eldest sister, “that I have a better taste than you.” The youngest sister, who was very beautiful, and had more charms and wit than the two elder, spoke in her turn: “For my part, sisters,” said she, “I shall not limit my desires to such trifles, but take a higher flight; and since we are upon wishing, I wish to be the emperor’s queen–consort. I would make him father of a prince, whose hair should be gold on one side of his head, and silver on the other; when he cried, the tears from his eyes should be pearls; and when he smiled, his vermilion lips should look like a rosebud fresh–blown.”

The three sisters’ wishes, particularly that of the youngest, seemed so singular to the sultan, that he resolved to gratify them in their desires; but without communicating his design to his grand vizier, he charged him only to take notice of the house, and bring the three sisters before him the following day.

The grand vizier, in executing the emperor’s orders, would but just give the sisters time to dress themselves to appear before his majesty, without telling them the reason. He brought them to the palace, and presented them to the emperor, who said to them, “Do you remember the wishes you expressed last night, when you were all in so pleasant a mood? Speak the truth; I must know what they were.” At these unexpected words of the emperor, the three sisters were much confounded. They cast down their eyes and blushed, and the colour which rose in the cheeks of the youngest quite captivated the emperor’s heart. Modesty, and fear lest they might have offended by their conversation, kept them silent. The emperor, perceiving their confusion, said to encourage them, “Fear nothing, I did not send for you to distress you; and since I see that without my intending it, this is the effect of the question I asked, as I know the wish of each, I will relieve you from your fears. You,” added he, “who wished to be my wife, shall have your desire this day; and you,” continued he, addressing himself to the two elder sisters, “shall also be married to my chief baker and cook.”

As soon as the sultan had declared his pleasure, the youngest sister, setting her elders an example, threw herself at the emperor’s feet to express her gratitude. “Sir,” said she, “my wish, since it is come to your majesty’s knowledge, was expressed only in the way of conversation and amusement. I am unworthy of the honour you do me, and supplicate your pardon for my presumption.” The other two sisters would have excused themselves also, but the emperor, interrupting them, said, “No, no; it shall be as I have declared; the wishes of all shall be fulfilled.” The nuptials were all celebrated that day, as the emperor had resolved, but in a different manner. The youngest sister’s were solemnized with all the rejoicings usual at the marriages of the emperors of Persia; and those of the other two sisters according to the quality and distinction of their husbands; the one as the sultan’s chief baker, and the other as head cook.

The two elder felt strongly the disproportion of their marriages to that of their younger sister.