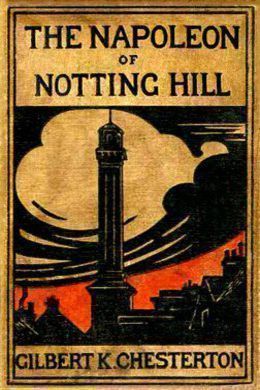 The Napoleon of Notting Hill

In a London of the future, the drudgery of capitalism and bureaucracy have worn the human spirit down to the point where it can barely stand. When a pint-sized clerk named Auberon Quinn is randomly selected as head of state, he decides to turn London into a medieval carnival for his own amusement. One man, Adam Wayne, takes the new order of things seriously, organizing a Notting Hill army to fight invaders from other neighborhoods. At first his project baffles everyone, but eventually his dedication proves infectious, with delightful results. FThe Napoleon of Notting Hill was Chesterton’s first novel and has been called the best first novel by any author in the twentieth century.

The human race, to which so many of my readers belong, has been playing at children’s games from the beginning, and will probably do it till the end, which is a nuisance for the few people who grow up. And one of the games to which it is most attached is called “Keep to–morrow dark,” and which is also named (by the rustics in Shropshire, I have no doubt) “Cheat the Prophet.” The players listen very carefully and respectfully to all that the clever men have to say about what is to happen in the next generation. The players then wait until all the clever men are dead, and bury them nicely. They then go and do something else. That is all. For a race of simple tastes, however, it is great fun.

For human beings, being children, have the childish wilfulness and the childish secrecy. And they never have from the beginning of the world done what the wise men have seen to be inevitable. They stoned the false prophets, it is said; but they could have stoned true prophets with a greater and juster enjoyment. Individually, men may present a more or less rational appearance, eating, sleeping, and scheming. But humanity as a whole is changeful, mystical, fickle, delightful. Men are men, but Man is a woman.

But in the beginning of the twentieth century the game of Cheat the Prophet was made far more difficult than it had ever been before. The reason was, that there were so many prophets and so many prophecies, that it was difficult to elude all their ingenuities. When a man did something free and frantic and entirely his own, a horrible thought struck him afterwards; it might have been predicted. Whenever a duke climbed a lamp–post, when a dean got drunk, he could not be really happy, he could not be certain that he was not fulfilling some prophecy. In the beginning of the twentieth century you could not see the ground for clever men. They were so common that a stupid man was quite exceptional, and when they found him, they followed him in crowds down the street and treasured him up and gave him some high post in the State. And all these clever men were at work giving accounts of what would happen in the next age, all quite clear, all quite keen–sighted and ruthless, and all quite different. And it seemed that the good old game of hoodwinking your ancestors could not really be managed this time, because the ancestors neglected meat and sleep and practical politics, so that they might meditate day and night on what their descendants would be likely to do.

But the way the prophets of the twentieth century went to work was this. They took something or other that was certainly going on in their time, and then said that it would go on more and more until something extraordinary happened. And very often they added that in some odd place that extraordinary thing had happened, and that it showed the signs of the times.

Thus, for instance, there were Mr. H. G. Wells and others, who thought that science would take charge of the future; and just as the motor–car was quicker than the coach, so some lovely thing would be quicker than the motor–car; and so on for ever. And there arose from their ashes Dr. Quilp, who said that a man could be sent on his machine so fast round the world that he could keep up a long, chatty conversation in some old–world village by saying a word of a sentence each time he came round. And it was said that the experiment had been tried on an apoplectic old major, who was sent round the world so fast that there seemed to be (to the inhabitants of some other star) a continuous band round the earth of white whiskers, red complexion and tweeds—a thing like the ring of Saturn.

Then there was the opposite school. There was Mr. Edward Carpenter, who thought we should in a very short time return to Nature, and live simply and slowly as the animals do. And Edward Carpenter was followed by James Pickie, D.D. (of Pocohontas College), who said that men were immensely improved by grazing, or taking their food slowly and continuously, after the manner of cows. And he said that he had, with the most encouraging results, turned city men out on all fours in a field covered with veal cutlets. Then Tolstoy and the Humanitarians said that the world was growing more merciful, and therefore no one would ever desire to kill. And Mr. Mick not only became a vegetarian, but at length declared vegetarianism doomed (“shedding,” as he called it finely, “the green blood of the silent animals”), and predicted that men in a better age would live on nothing but salt. And then came the pamphlet from Oregon (where the thing was tried), the pamphlet called “Why should Salt suffer?” and there was more trouble.