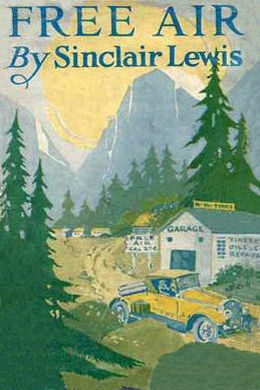 This cheerful little road novel is about Claire Boltwood, who, in the early days of the 20th century, travels by automobile from New York City to the Pacific Northwest, where she falls in love with a nice, down-to-earth young man and gives up her snobbish Estate.

When the windshield was closed it became so filmed with rain that Claire fancied she was piloting a drowned car in dim spaces under the sea. When it was open, drops jabbed into her eyes and chilled her cheeks. She was excited and thoroughly miserable. She realized that these Minnesota country roads had no respect for her polite experience on Long Island parkways. She felt like a woman, not like a driver.

But the Gomez-Dep roadster had seventy horsepower, and sang songs. Since she had left Minneapolis nothing had passed her. Back yonder a truck had tried to crowd her, and she had dropped into a ditch, climbed a bank, returned to the road, and after that the truck was not. Now she was regarding a view more splendid than mountains above a garden by the sea–a stretch of good road. To her passenger, her father, Claire chanted:

“Heavenly! There’s some gravel. We can make time. We’ll hustle on to the next town and get dry.”

Instantly, the dismay of it rushing at her, she saw the end of the patch of gravel. The road ahead was a wet black smear, criss-crossed with ruts. The car shot into a morass of prairie gumbo–which is mud mixed with tar, fly-paper, fish glue, and well-chewed, chocolate-covered caramels. When cattle get into gumbo, the farmers send for the stump-dynamite and try blasting.

It was her first really bad stretch of road. She was frightened. Then she was too appallingly busy to be frightened, or to be Miss Claire Boltwood, or to comfort her uneasy father. She had to drive. Her frail graceful arms put into it a vicious vigor that was genius.

When the wheels struck the slime, they slid, they wallowed. The car skidded. It was terrifyingly out of control. It began majestically to turn toward the ditch. She fought the steering wheel as though she were shadow-boxing, but the car kept contemptuously staggering till it was sideways, straight across the road. Somehow, it was back again, eating into a rut, going ahead. She didn’t know how she had done it, but she had got it back. She longed to take time to retrace her own cleverness in steering. She didn’t. She kept going.

The car backfired, slowed. She yanked the gear from third into first. She sped up. The motor ran like a terrified pounding heart, while the car crept on by inches through filthy mud that stretched ahead of her without relief.

She was battling to hold the car in the principal rut. She snatched the windshield open, and concentrated on that left rut. She felt that she was keeping the wheel from climbing those high sides of the rut, those six-inch walls of mud, sparkling with tiny grits. Her mind snarled at her arms, “Let the ruts do the steering. You’re just fighting against them.” It worked. Once she let the wheels alone they comfortably followed the furrows, and for three seconds she had that delightful belief of every motorist after every mishap, “Now that this particular disagreeableness is over, I’ll never, never have any trouble again!”

But suppose the engine overheated, ran out of water? Anxiety twanged at her nerves. And the deep distinctive ruts were changing to a complex pattern, like the rails in a city switchyard. She picked out the track of the one motor car that had been through here recently. It was marked with the swastika tread of the rear tires. That track was her friend; she knew and loved the driver of a car she had never seen in her life.

She was very tired. She wondered if she might not stop for a moment. Then she came to an upslope. The car faltered; felt indecisive beneath her. She jabbed down the accelerator. Her hands pushed at the steering wheel as though she were pushing the car. The engine picked up, sulkily kept going. To the eye, there was merely a rise in the rolling ground, but to her anxiety it was a mountain up which she–not the engine, but herself–pulled this bulky mass, till she had reached the top, and was safe again–for a second. Still there was no visible end of the mud.

In alarm she thought, “How long does it last? I can’t keep this up. I–Oh!”

The guiding tread of the previous car was suddenly lost in a mass of heaving, bubble-scattered mud, like a batter of black dough. She fairly picked up the car, and flung it into that welter, through it, and back into the reappearing swastika-marked trail.

Her father spoke: “You’re biting your lips. They’ll bleed, if you don’t look out. Better stop and rest.”

“Can’t! No bottom to this mud. Once stop and lose momentum–stuck for keeps!”