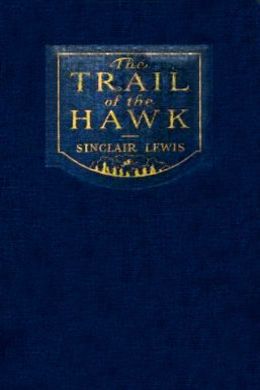 The Trail of the Hawk

A Comedy of the Seriousness of Life

The Trail of the Hawk, by Sinclair Lewis, is the chronicle of an inveterate Rolling Stone. Carl Ericson, a born rebel against conventions, finds himself from boyhood up at war with the combined forces of family, school and society, all three of which unite in trying to mould him into the average colourless human being. Consequently throughout his earlier years he is in perpetual disgrace, at home, at school and at college. Thus it happens that we find Carl in early adolescence a friendless and penniless wanderer, undaunted and thrilling with a sense of freedom and the boundless opportunity of satisfying his unquenchable curiosity about life.

Carl Ericson was being naughty. Probably no boy in Joralemon was being naughtier that October Saturday afternoon. He had not half finished the wood–piling which was his punishment for having chased the family rooster thirteen times squawking around the chicken–yard, while playing soldiers with Bennie Rusk.

He stood in the middle of the musty woodshed, pessimistically kicking at the scattered wood. His face was stern, as became a man of eight who was a soldier of fortune famed from the front gate to the chicken–yard. An unromantic film of dirt hid the fact that his Scandinavian cheeks were like cream–colored silk stained with rose–petals. A baby Norseman, with only an average boy’s prettiness, yet with the whiteness and slenderness of a girl’s little finger. A back–yard boy, in baggy jacket and pants, gingham blouse, and cap whose lining oozed back over his ash–blond hair, which was tangled now like trampled grass, with a tiny chip riding grotesquely on one flossy lock.

The darkness of the shed displeased Carl. The whole basic conception of work bored him. The sticks of wood were personal enemies to which he gave insulting names. He had always admired the hard bark and metallic resonance of the ironwood, but he hated the poplar—”popple” it is called in Joralemon, Minnesota. Poplar becomes dry and dusty, and the bark turns to a monstrously mottled and evil greenish–white. Carl announced to one poplar stick, “I could lick you! I’m a gen’ral, I am.” The stick made no reply whatever, and he contemptuously shied it out into the chickweed which matted the grubby back yard. This necessitated his sneaking out and capturing it by stalking it from the rear, lest it rouse the Popple Army.