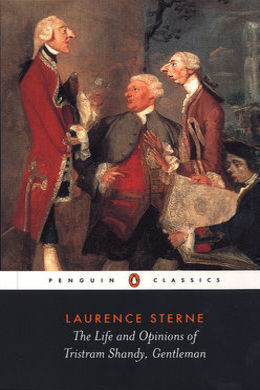 The Life and Opinions of Tristram Shandy, Gentleman

At once endlessly facetious and highly serious, Sterne’s great comic novel contains some of the best-known and best-loved characters in English literature–including Uncle Toby, Corporal Trim, Parson Yorick, and Dr. Slop–and boasts one of the most innovative and whimsical narrative styles in all literature.

A Sentimental Journey, a [thematic] sequel, is also available.

I wish either my father or my mother, or indeed both of them, as they were in duty both equally bound to it, had minded what they were about when they begot me; had they duly consider’d how much depended upon what they were then doing;–that not only the production of a rational Being was concerned in it, but that possibly the happy formation and temperature of his body, perhaps his genius and the very cast of his mind;–and, for aught they knew to the contrary, even the fortunes of his whole house might take their turn from the humours and dispositions which were then uppermost;–Had they duly weighed and considered all this, and proceeded accordingly,–I am verily persuaded I should have made a quite different figure in the world, from that in which the reader is likely to see me.–Believe me, good folks, this is not so inconsiderable a thing as many of you may think it;–you have all, I dare say, heard of the animal spirits, as how they are transfused from father to son, &c. &c.–and a great deal to that purpose:–Well, you may take my word, that nine parts in ten of a man’s sense or his nonsense, his successes and miscarriages in this world depend upon their motions and activity, and the different tracks and trains you put them into, so that when they are once set a-going, whether right or wrong, ‘tis not a half-penny matter,–away they go cluttering like hey-go mad; and by treading the same steps over and over again, they presently make a road of it, as plain and as smooth as a garden-walk, which, when they are once used to, the Devil himself sometimes shall not be able to drive them off it.

Pray my Dear, quoth my mother, have you not forgot to wind up the clock?–Good G..! cried my father, making an exclamation, but taking care to moderate his voice at the same time,–Did ever woman, since the creation of the world, interrupt a man with such a silly question? Pray, what was your father saying?–Nothing.

–Then, positively, there is nothing in the question that I can see, either good or bad.–Then, let me tell you, Sir, it was a very unseasonable question at least,–because it scattered and dispersed the animal spirits, whose business it was to have escorted and gone hand in hand with the Homunculus, and conducted him safe to the place destined for his reception.

The Homunculus, Sir, in however low and ludicrous a light he may appear, in this age of levity, to the eye of folly or prejudice;–to the eye of reason in scientific research, he stands confess’d–a Being guarded and circumscribed with rights.–The minutest philosophers, who by the bye, have the most enlarged understandings, (their souls being inversely as their enquiries) shew us incontestably, that the Homunculus is created by the same hand,–engender’d in the same course of nature,–endow’d with the same loco-motive powers and faculties with us:–That he consists as we do, of skin, hair, fat, flesh, veins, arteries, ligaments, nerves, cartilages, bones, marrow, brains, glands, genitals, humours, and articulations;–is a Being of as much activity,–and in all senses of the word, as much and as truly our fellow-creature as my Lord Chancellor of England.–He may be benefitted,–he may be injured,–he may obtain redress; in a word, he has all the claims and rights of humanity, which Tully, Puffendorf, or the best ethick writers allow to arise out of that state and relation.

Now, dear Sir, what if any accident had befallen him in his way alone!–or that through terror of it, natural to so young a traveller, my little Gentleman had got to his journey’s end miserably spent;–his muscular strength and virility worn down to a thread;–his own animal spirits ruffled beyond description,–and that in this sad disorder’d state of nerves, he had lain down a prey to sudden starts, or a series of melancholy dreams and fancies, for nine long, long months together.–I tremble to think what a foundation had been laid for a thousand weaknesses both of body and mind, which no skill of the physician or the philosopher could ever afterwards have set thoroughly to rights.

To my uncle Mr. Toby Shandy do I stand indebted for the preceding anecdote, to whom my father, who was an excellent natural philosopher, and much given to close reasoning upon the smallest matters, had oft, and heavily complained of the injury; but once more particularly, as my uncle Toby well remember’d, upon his observing a most unaccountable obliquity, (as he call’d it) in my manner of setting up my top, and justifying the principles upon which I had done it,–the old gentleman shook his head, and in a tone more expressive by half of sorrow than reproach,–he said his heart all along foreboded, and he saw it verified in this, and from a thousand other observations he had made upon me.