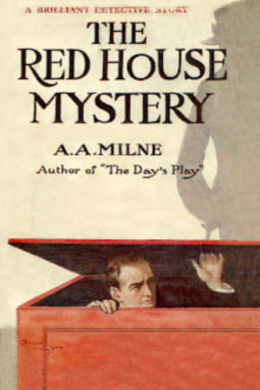 Droll, finely crafted whodunit from A. A. Milne (author of Winnie-the-Pooh), one of England’s most popular writer’s, sparkles with witty dialogue, deft plotting, and an amusing cast of characters. Amateur detectives Antony Gillingham and his chum Bill Beverley investigate the disappearance of their genial host after a mysterious shooting, come upon secret passageways, discover underwater evidence, and more. A rare gem that will charm mystery lovers, Anglophiles, and general readers alike.

In the drowsy heat of the summer afternoon the Red House was taking its siesta. There was a lazy murmur of bees in the flower-borders, a gentle cooing of pigeons in the tops of the elms. From distant lawns came the whir of a mowing-machine, that most restful of all country sounds; making ease the sweeter in that it is taken while others are working.

It was the hour when even those whose business it is to attend to the wants of others have a moment or two for themselves. In the housekeeper’s room Audrey Stevens, the pretty parlour-maid, re-trimmed her best hat, and talked idly to her aunt, the cook-housekeeper of Mr. Mark Ablett’s bachelor home.

“For Joe?” said Mrs. Stevens placidly, her eye on the hat. Audrey nodded. She took a pin from her mouth, found a place in the hat for it, and said, “He likes a bit of pink.”

“I don’t say I mind a bit of pink myself,” said her aunt. “Joe Turner isn’t the only one.”

“It isn’t everybody’s colour,” said Audrey, holding the hat out at arm’s length, and regarding it thoughtfully. “Stylish, isn’t it?”

“Oh, it’ll suit you all right, and it would have suited me at your age. A bit too dressy for me now, though wearing better than some other people, I daresay. I was never the one to pretend to be what I wasn’t. If I’m fifty-five, I’m fifty-five–that’s what I say.”

“I was just giving that as an example,” said Mrs. Stevens with great dignity.

Audrey threaded a needle, held her hand out and looked at her nails critically for a moment, and then began to sew.

“As I told you all this morning,” said her aunt, “I’ve been here five years, and never heard of a brother. I could say that before everybody if I was going to die to-morrow. There’s been no brother here while I’ve been here.”

“You could have knocked me down with a feather when he spoke about him at breakfast this morning. I didn’t hear what went before, naturally, but they was all talking about the brother when I went in–now what was it I went in for–hot milk, was it, or toast?–well, they was all talking, and Mr. Mark turns to me, and says–you know his way–‘Stevens,’ he says, ‘my brother is coming to see me this afternoon; I’m expecting him about three,’ he says. ‘Show him into the office,’ he says, just like that. ‘Yes, sir,’ I says quite quietly, but I was never so surprised in my life, not knowing he had a brother. ‘My brother from Australia,’ he says–there, I’d forgotten that. From Australia.”

“Well, he may have been in Australia,” said Mrs. Stevens, judicially; “I can’t say for that, not knowing the country; but what I do say is he’s never been here. Not while I’ve been here, and that’s five years.”

“Got into trouble, I suppose,” said Audrey carelessly. “They were saying at breakfast he’d been a wild one. Debts. I’m glad Joe isn’t like that. He’s got fifteen pounds in the post-office savings’ bank. Did I tell you?”

But there was not to be any more talk of Joe Turner that afternoon. The ringing of a bell brought Audrey to her feet–no longer Audrey, but now Stevens. She arranged her cap in front of the glass.

“There, that’s the front door,” she said. “That’s him. ‘Show him into the office,’ said Mr. Mark. I suppose he doesn’t want the other ladies and gentlemen to see him. Well, they’re all out at their golf, anyhow–Wonder if he’s going to stay–P’raps he’s brought back a lot of gold from Australia–I might hear something about Australia, because if anybody can get gold there, then I don’t say but what Joe and I–”