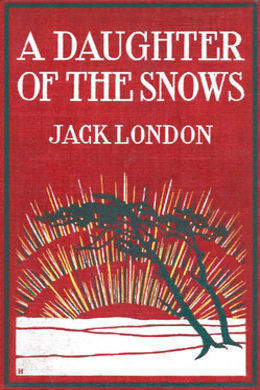 A Daughter of the Snows

Set in the Yukon, it tells the story of Frona Welse, a Stanford graduate and physical Valkyrie, who takes to the trail after upsetting her wealthy father’s community by her forthright manner and befriending the town’s prostitute. She is also torn between love for two suitors: Gregory St Vincent, a local man who turns out to be cowardly and treacherous; and Vance Corliss, a Yale-trained mining engineer. An adventure novel of the first order.

“All ready, Miss Welse, though I’m sorry we can’t spare one of the steamer’s boats.”

Frona Welse arose with alacrity and came to the first officer’s side.

“We’re so busy,” he explained, “and gold-rushers are such perishable freight, at least–”

“I understand,” she interrupted, “and I, too, am behaving as though I were perishable. And I am sorry for the trouble I am giving you, but–but–” She turned quickly and pointed to the shore. “Do you see that big log-house? Between the clump of pines and the river? I was born there.”

“Guess I’d be in a hurry myself,” he muttered, sympathetically, as he piloted her along the crowded deck.

Everybody was in everybody else’s way; nor was there one who failed to proclaim it at the top of his lungs. A thousand gold-seekers were clamoring for the immediate landing of their outfits. Each hatchway gaped wide open, and from the lower depths the shrieking donkey-engines were hurrying the misassorted outfits skyward. On either side of the steamer, rows of scows received the flying cargo, and on each of these scows a sweating mob of men charged the descending slings and heaved bales and boxes about in frantic search. Men waved shipping receipts and shouted over the steamer-rails to them. Sometimes two and three identified the same article, and war arose. The “two-circle” and the “circle-and-dot” brands caused endless jangling, while every whipsaw discovered a dozen claimants.

“The purser insists that he is going mad,” the first officer said, as he helped Frona Welse down the gangway to the landing stage, “and the freight clerks have turned the cargo over to the passengers and quit work. But we’re not so unlucky as the Star of Bethlehem,” he reassured her, pointing to a steamship at anchor a quarter of a mile away. “Half of her passengers have pack-horses for Skaguay and White Pass, and the other half are bound over the Chilcoot. So they’ve mutinied and everything’s at a standstill.”

“Hey, you!” he cried, beckoning to a Whitehall which hovered discreetly on the outer rim of the floating confusion.

A tiny launch, pulling heroically at a huge tow-barge, attempted to pass between; but the boatman shot nervily across her bow, and just as he was clear, unfortunately, caught a crab. This slewed the boat around and brought it to a stop.

“Watch out!” the first officer shouted.

A pair of seventy-foot canoes, loaded with outfits, gold-rushers, and Indians, and under full sail, drove down from the counter direction. One of them veered sharply towards the landing stage, but the other pinched the Whitehall against the barge. The boatman had unshipped his oars in time, but his small craft groaned under the pressure and threatened to collapse. Whereat he came to his feet, and in short, nervous phrases consigned all canoe-men and launch-captains to eternal perdition. A man on the barge leaned over from above and baptized him with crisp and crackling oaths, while the whites and Indians in the canoe laughed derisively.

The boatman’s fist landed on the point of his critic’s jaw and dropped him stunned upon the heaped merchandise. Not content with this summary act he proceeded to follow his fist into the other craft. The miner nearest him tugged vigorously at a revolver which had jammed in its shiny leather holster, while his brother argonauts, laughing, waited the outcome. But the canoe was under way again, and the Indian helmsman drove the point of his paddle into the boatman’s chest and hurled him backward into the bottom of the Whitehall.

When the flood of oaths and blasphemy was at full tide, and violent assault and quick death seemed most imminent, the first officer had stolen a glance at the girl by his side. He had expected to find a shocked and frightened maiden countenance, and was not at all prepared for the flushed and deeply interested face which met his eyes.

But she broke in, as though annoyed by the interruption, “No, no; not at all. I am enjoying it every bit. Though I am glad that man’s revolver stuck. If it had not–”

“We might have been delayed in getting ashore.” The first officer laughed, and therein displayed his tact.

“That man is a robber,” he went on, indicating the boatman, who had now shoved his oars into the water and was pulling alongside. “He agreed to charge only twenty dollars for putting you ashore. Said he’d have made it twenty-five had it been a man. He’s a pirate, mark me, and he will surely hang some day. Twenty dollars for a half-hour’s work! Think of it!”

“Easy, sport! Easy!” cautioned the fellow in question, at the same time making an awkward landing and dropping one of his oars over-side. “You’ve no call to be flingin’ names about,” he added, defiantly, wringing out his shirt-sleeve, wet from rescue of the oar.

“You’ve got good ears, my man,” began the first officer.