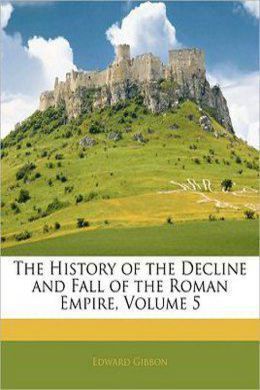 Decline and Fall of the Roman Empire Vol. 5

series: The History of the Decline and Fall of the Roman Empire (#5)

In this fifth of six volumes, readers will find Chapter 45 (“State of Italy Under the Lombards”) through Chapter 51 (“Conquests by the Arabs”), which cover the reign of Justin II; the Lombards’ conquest of Italy; the Franks’ conquest of Italy; the reign of Tiberius II; the life of Gregory the Great; and the rules of Phocas and Heraclius; the development of Christianity in the Eastern Roman Empire and the councils of Ephesus, Chalcedon, and Nice; the Greek emperors of Constantinople; the rule of Charlemagne of France and the division of his empire upon his death; and the clash between the Arabs and the Eastern Roman Empire.

In the connection of the church and state, I have considered the former as subservient only, and relative, to the latter; a salutary maxim, if in fact, as well as in narrative, it had ever been held sacred. The Oriental philosophy of the Gnostics, the dark abyss of predestination and grace, and the strange transformation of the Eucharist from the sign to the substance of Christ’s body, I have purposely abandoned to the curiosity of speculative divines. But I have reviewed, with diligence and pleasure, the objects of ecclesiastical history, by which the decline and fall of the Roman empire were materially affected, the propagation of Christianity, the constitution of the Catholic church, the ruin of Paganism, and the sects that arose from the mysterious controversies concerning the Trinity and incarnation. At the head of this class, we may justly rank the worship of images, so fiercely disputed in the eighth and ninth centuries; since a question of popular superstition produced the revolt of Italy, the temporal power of the popes, and the restoration of the Roman empire in the West.

The primitive Christians were possessed with an unconquerable repugnance to the use and abuse of images; and this aversion may be ascribed to their descent from the Jews, and their enmity to the Greeks. The Mosaic law had severely proscribed all representations of the Deity; and that precept was firmly established in the principles and practice of the chosen people. The wit of the Christian apologists was pointed against the foolish idolaters, who bowed before the workmanship of their own hands; the images of brass and marble, which, had they been endowed with sense and motion, should have started rather from the pedestal to adore the creative powers of the artist. Perhaps some recent and imperfect converts of the Gnostic tribe might crown the statues of Christ and St. Paul with the profane honors which they paid to those of Aristotle and Pythagoras; but the public religion of the Catholics was uniformly simple and spiritual; and the first notice of the use of pictures is in the censure of the council of Illiberis, three hundred years after the Christian æra. Under the successors of Constantine, in the peace and luxury of the triumphant church, the more prudent bishops condescended to indulge a visible superstition, for the benefit of the multitude; and, after the ruin of Paganism, they were no longer restrained by the apprehension of an odious parallel. The first introduction of a symbolic worship was in the veneration of the cross, and of relics. The saints and martyrs, whose intercession was implored, were seated on the right hand if God; but the gracious and often supernatural favors, which, in the popular belief, were showered round their tomb, conveyed an unquestionable sanction of the devout pilgrims, who visited, and touched, and kissed these lifeless remains, the memorials of their merits and sufferings. But a memorial, more interesting than the skull or the sandals of a departed worthy, is the faithful copy of his person and features, delineated by the arts of painting or sculpture. In every age, such copies, so congenial to human feelings, have been cherished by the zeal of private friendship, or public esteem: the images of the Roman emperors were adored with civil, and almost religious, honors; a reverence less ostentatious, but more sincere, was applied to the statues of sages and patriots; and these profane virtues, these splendid sins, disappeared in the presence of the holy men, who had died for their celestial and everlasting country. At first, the experiment was made with caution and scruple; and the venerable pictures were discreetly allowed to instruct the ignorant, to awaken the cold, and to gratify the prejudices of the heathen proselytes. By a slow though inevitable progression, the honors of the original were transferred to the copy: the devout Christian prayed before the image of a saint; and the Pagan rites of genuflection, luminaries, and incense, again stole into the Catholic church. The scruples of reason, or piety, were silenced by the strong evidence of visions and miracles; and the pictures which speak, and move, and bleed, must be endowed with a divine energy, and may be considered as the proper objects of religious adoration. The most audacious pencil might tremble in the rash attempt of defining, by forms and colors, the infinite Spirit, the eternal Father, who pervades and sustains the universe.