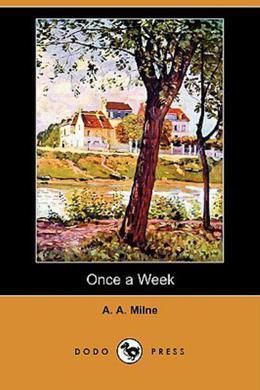 Once A Week is a collection of short stories and vignettes by A. A. Milne originally published in Punch. Stories included are; The Heir, Winter Sport, A Baker’s Dozen, Getting Married, Home Affairs, Other People’s Houses, Burlesques, Merely Players and The Men Who Succeed. The collection was first published on 15 October 1914 (source: Wikipedia).

“In less refined circles than ours,” I said to Myra, “your behaviour would be described as swank. Really, to judge from the airs you put on, you might be the child’s mother.”

“He’s jealous because he’s not an aunt himself. Isn’t he, ducksey darling?”

“I do wish you wouldn’t keep dragging the baby into the conversation; we can make it go quite well as a duologue. As to being jealous–why, it’s absurd. True, I’m not an aunt, but in a very short time I shall be an uncle by marriage, which sounds to me much superior. That is,” I added, “if you’re still equal to it.”

Myra blew me a kiss over the cradle.

“Another thing you’ve forgotten,” I went on, “is that I’m down for a place as a godfather. Archie tells me that it isn’t settled yet, but that there’s a good deal of talk about it in the clubs. Who’s the other going to be? Not Thomas, I suppose? That would be making the thing rather a farce.”

“Hasn’t Dahlia broken it to you?” said Myra anxiously.

“Simpson?” I asked, in an awed whisper.

Myra nodded. “And, of course, Thomas,” she said.

“Heavens! Not three of us? What a jolly crowd we shall be. Thomas can play our best ball. We might—-“

“But of course there are only going to be two godfathers,” she said, and leant over the cradle again.

“Oh, baby,” sighed Myra, “what a very slow uncle by marriage you’re going to have!”

I stood and gazed at my three fingers for some time.

“I’ve got it,” I said at last, and I pulled down the middle one. “The rumour in the clubs was unauthorized. I don’t get a place after all.”

“Don’t say you mind,” pleaded Myra. “You see, Dahlia thought that as you were practically one of the family already, an uncle-elect by marriage, and as she didn’t want to choose between Thomas and Samuel—-“

“Say no more. I was only afraid that she might have something against my moral character. Child,” I went on, rising and addressing the unresponsive infant, “England has lost a godfather this day, but the world has gained a—-what? I don’t know. I want my tea.”

Myra gave the baby a last kiss and got up.

“Can I trust him with you while I go and see about Dahlia?”

“I’m not sure. It depends how I feel. I may change him with some poor baby in the village. Run away, aunt, and leave us men to ourselves. We have several matters to discuss.”

When the child and I were alone together, I knelt by his cradle and surveyed his features earnestly. I wanted to see what it was he had to offer Myra which I could not give her. “This,” I said to myself, “is the face which has come between her and me,” for it was unfortunately true that I could no longer claim Myra’s undivided attention. But the more I looked at him the more mysterious the whole thing became to me.

“Not a bad kid?” said a voice behind me.

I turned and saw Archie.

“Yours, I believe,” I said, and I waved him to the cradle.

Archie bent down and tickled the baby’s chin, making appropriate noises the while–one of the things a father has to learn to do.

“Who do you think he’s like?” he asked proudly.

“The late Mr. Gladstone,” I said, after deep thought.

“Wrong. Hallo, here’s Dahlia coming out. I hope, for your sake, that the baby’s all right. If she finds he’s caught measles or anything, you’ll get into trouble.”

By a stroke of bad luck the child began to cry as soon as he saw the ladies. Myra rushed up to him.

“Poor little darling,” she said soothingly. “Did his uncle by marriage frighten him, then?”

“Don’t listen to her, Dahlia,” I said. “I haven’t done anything to him. We were chatting together quite amicably until he suddenly caught sight of Myra and burst into tears.”

“He’s got a little pain,” said Dahlia gently taking him up and patting him.

“I think the trouble is mental,” suggested Archie. “He looks to me as if he had something on his conscience. Did he say anything to you about it when you were alone?”

“He didn’t say much,” I confessed, “but he seemed to be keeping something back. I think he wants a bit of a run, really.”

“Poor little lamb,” said Dahlia. “There, he’s better now, thank you.” She looked up at Archie and me. “I don’t believe you two love him a bit.”

Archie smiled at his wife and went over to the tea-table to pour out. I sat on the grass and tried to analyse my feelings to my nephew by marriage.

“As an acquaintance,” I said, “he is charming; I know no one who is better company. If I cannot speak of his more solid qualities, it is only because I do not know him well enough. But to say whether I love him or not is difficult; I could tell you better after our first quarrel. However, there is one thing I must confess. I am rather jealous of him.”

“You envy his life of idleness?”