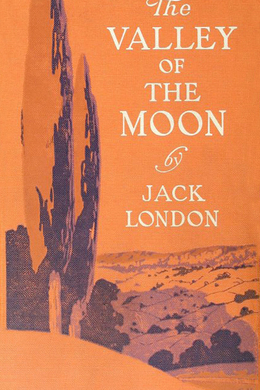 The Valley of the Moon

“The Valley of the Moon” traces the odyssey of Billy and Saxon Roberts from the labor strife of Oakland at the turn of the century through Central and Northern California in search of land they can farm independently - a journey that echoes Jack London’s own escape from urban poverty. As London lost hope in the prospects of the socialist party and organized labor, he began researching a scientific and environmentally sound approach to farming. In his novel, it is Saxon, London’s most fully realized heroine, who embodies these concerns. The Valley of the Moon is London’s paean to his second wife Charmian and to the pastoral life and his ranch in Glen Ellen, the Valley of the Moon.

“You hear me, Saxon? Come on along. What if it is the Bricklayers? I’ll have gentlemen friends there, and so’ll you. The Al Vista band’ll be along, an’ you know it plays heavenly. An’ you just love dancin’—”

Twenty feet away, a stout, elderly woman interrupted the girl’s persuasions. The elderly woman’s back was turned, and the back–loose, bulging, and misshapen–began a convulsive heaving.

She flung wild glances, like those of an entrapped animal, up and down the big whitewashed room that panted with heat and that was thickly humid with the steam that sizzled from the damp cloth under the irons of the many ironers. From the girls and women near her, all swinging irons steadily but at high pace, came quick glances, and labor efficiency suffered to the extent of a score of suspended or inadequate movements. The elderly woman’s cry had caused a tremor of money-loss to pass among the piece-work ironers of fancy starch.

She gripped herself and her iron with a visible effort, and dabbed futilely at the frail, frilled garment on the board under her hand.

“I thought she’d got’em again–didn’t you?” the girl said.

“It’s a shame, a woman of her age, and… condition,” Saxon answered, as she frilled a lace ruffle with a hot fluting-iron. Her movements were delicate, safe, and swift, and though her face was wan with fatigue and exhausting heat, there was no slackening in her pace.

“An’ her with seven, an’ two of ‘em in reform school,” the girl at the next board sniffed sympathetic agreement. “But you just got to come to Weasel Park to-morrow, Saxon. The Bricklayers’ is always lively–tugs-of-war, fat-man races, real Irish jiggin’, an’… an’ everything. An’ the floor of the pavilion’s swell.”

But the elderly woman brought another interruption. She dropped her iron on the shirtwaist, clutched at the board, fumbled it, caved in at the knees and hips, and like a half-empty sack collapsed on the floor, her long shriek rising in the pent room to the acrid smell of scorching cloth. The women at the boards near to her scrambled, first, to the hot iron to save the cloth, and then to her, while the forewoman hurried belligerently down the aisle. The women farther away continued unsteadily at their work, losing movements to the extent of a minute’s set-back to the totality of the efficiency of the fancy-starch room.

“Enough to kill a dog,” the girl muttered, thumping her iron down on its rest with reckless determination. “Workin’ girls’ life ain’t what it’s cracked up. Me to quit–that’s what I’m comin’ to.”

“Mary!” Saxon uttered the other’s name with a reproach so profound that she was compelled to rest her own iron for emphasis and so lose a dozen movements.

Mary flashed a half-frightened look across.

“I didn’t mean it, Saxon,” she whimpered. “Honest, I didn’t. I wouldn’t never go that way. But I leave it to you, if a day like this don’t get on anybody’s nerves. Listen to that!”

The stricken woman, on her back, drumming her heels on the floor, was shrieking persistently and monotonously, like a mechanical siren. Two women, clutching her under the arms, were dragging her down the aisle. She drummed and shrieked the length of it. The door opened, and a vast, muffled roar of machinery burst in; and in the roar of it the drumming and the shrieking were drowned ere the door swung shut. Remained of the episode only the scorch of cloth drifting ominously through the air.

And thereafter, for a long time, the many irons rose and fell, the pace of the room in no wise diminished; while the forewoman strode the aisles with a threatening eye for incipient breakdown and hysteria. Occasionally an ironer lost the stride for an instant, gasped or sighed, then caught it up again with weary determination. The long summer day waned, but not the heat, and under the raw flare of electric light the work went on.

By nine o’clock the first women began to go home. The mountain of fancy starch had been demolished–all save the few remnants, here and there, on the boards, where the ironers still labored.

Saxon finished ahead of Mary, at whose board she paused on the way out.

“Twelve and a quarter,” was the answer, just touched with pride. “And I’d a-made more if it wasn’t for that fake bunch of starchers.”

“My! I got to pass it to you,” Mary congratulated. “You’re a sure fierce hustler–just eat it up. Me–I’ve only ten an’ a half, an’ for a hard week… See you on the nine-forty. Sure now. We can just fool around until the dancin’ begins. A lot of my gentlemen friends’ll be there in the afternoon.”