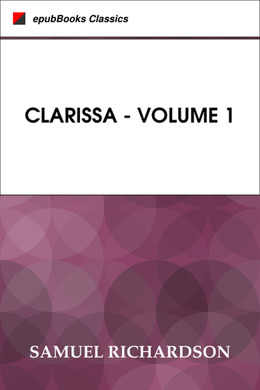 This is Volume 1 of Samuel Richardson’s classic novel; Clarissa. Pressured by her unscrupulous family to marry a wealthy man she detests, the young Clarissa Harlowe is tricked into fleeing with the witty and debonair Robert Lovelace and places herself under his protection. Lovelace, however, proves himself to be an untrustworthy rake whose vague promises of marriage are accompanied by unwelcome and increasingly brutal sexual advances. And yet, Clarissa finds his charm alluring, her scrupulous sense of virtue tinged with unconfessed desire. Told through a complex series of interweaving letters, Clarissa is a richly ambiguous study of a fatally attracted couple and a work of astonishing power and immediacy. A huge success when it first appeared in 1747, it remains one of the greatest of all novels.

I am extremely concerned, my dearest friend, for the disturbance that have happened in your family. I know how it must hurt you to become the subject of the public talk: and yet, upon an occasion so generally known, it is impossible but that whatever relates to a young lady, whose distinguished merits have made her the public care, should engage every body’s attention. I long to have the particulars from yourself; and of the usage I am told you receive upon an accident you could not help; and in which, as far as I can learn, the sufferer was the aggressor.

Mr. Diggs, the surgeon, whom I sent for at the first hearing of the rencounter, to inquire, for your sake, how your brother was, told me, that there was no danger from the wound, if there were none from the fever; which it seems has been increased by the perturbation of his spirits.

Mr. Wyerley drank tea with us yesterday; and though he is far from being partial to Mr. Lovelace, as it may well be supposed, yet both he and Mr. Symmes blame your family for the treatment they gave him when he went in person to inquire after your brother’s health, and to express his concern for what had happened.

They say, that Mr. Lovelace could not avoid drawing his sword: and that either your brother’s unskilfulness or passion left him from the very first pass entirely in his power.

This, I am told, was what Mr. Lovelace said upon it; retreating as he spoke: ‘Have a care, Mr. Harlowe—your violence puts you out of your defence. You give me too much advantage. For your sister’s sake, I will pass by every thing:—if—’

But this the more provoked his rashness, to lay himself open to the advantage of his adversary—who, after a slight wound given him in the arm, took away his sword.

There are people who love not your brother, because of his natural imperiousness and fierce and uncontroulable temper: these say, that the young gentleman’s passion was abated on seeing his blood gush plentifully down his arm; and that he received the generous offices of his adversary (who helped him off with his coat and waistcoat, and bound up his arm, till the surgeon could come,) with such patience, as was far from making a visit afterwards from that adversary, to inquire after his health, appear either insulting or improper.

Be this as it may, every body pities you. So steady, so uniform in your conduct: so desirous, as you always said, of sliding through life to the end of it unnoted; and, as I may add, not wishing to be observed even for your silent benevolence; sufficiently happy in the noble consciousness which attends it: Rather useful than glaring, your deserved motto; though now, to your regret, pushed into blaze, as I may say: and yet blamed at home for the faults of others—how must such a virtue suffer on every hand!—yet it must be allowed, that your present trial is but proportioned to your prudence.

As all your friends without doors are apprehensive that some other unhappy event may result from so violent a contention, in which it seems the families on both sides are now engaged, I must desire you to enable me, on the authority of your own information, to do you occasional justice.

My mother, and all of us, like the rest of the world, talk of nobody but you on this occasion, and of the consequences which may follow from the resentments of a man of Mr. Lovelace’s spirit; who, as he gives out, has been treated with high indignity by your uncles. My mother will have it, that you cannot now, with any decency, either see him, or correspond with him. She is a good deal prepossessed by your uncle Antony; who occasionally calls upon us, as you know; and, on this rencounter, has represented to her the crime which it would be in a sister to encourage a man who is to wade into her favour (this was his expression) through the blood of her brother.

Write to me therefore, my dear, the whole of your story from the time that Mr. Lovelace was first introduced into your family; and particularly an account of all that passed between him and your sister; about which there are different reports; some people scrupling not to insinuate that the younger sister has stolen a lover from the elder: and pray write in so full a manner as may satisfy those who know not so much of your affairs as I do. If anything unhappy should fall out from the violence of such spirits as you have to deal with, your account of all things previous to it will be your best justification.

You see what you draw upon yourself by excelling all your sex. Every individual of it who knows you, or has heard of you, seems to think you answerable to her for your conduct in points so very delicate and concerning.