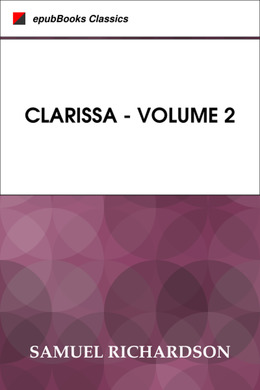 This is Volume 2 of Samuel Richardson’s classic novel; Clarissa. Pressured by her unscrupulous family to marry a wealthy man she detests, the young Clarissa Harlowe is tricked into fleeing with the witty and debonair Robert Lovelace and places herself under his protection. Lovelace, however, proves himself to be an untrustworthy rake whose vague promises of marriage are accompanied by unwelcome and increasingly brutal sexual advances. And yet, Clarissa finds his charm alluring, her scrupulous sense of virtue tinged with unconfessed desire. Told through a complex series of interweaving letters, Clarissa is a richly ambiguous study of a fatally attracted couple and a work of astonishing power and immediacy. A huge success when it first appeared in 1747, it remains one of the greatest of all novels.

My heart fluttered with the hope and the fear of seeing my mother, and with the shame and grief of having given her so much uneasiness. But it needed not: she was not permitted to come. But my aunt was so good as to return, yet not without my sister; and, taking my hand, made me sit down by her.

She came, she must own, officiously, she said, this once more, though against the opinion of my father: but knowing and dreading the consequence of my opposition, she could not but come.

She then set forth to my friends’ expectation from me; Mr. Solmes’s riches (three times as rich he came out to be, as any body had thought him); the settlements proposed; Mr. Lovelace’s bad character; their aversions to him; all in a very strong light; not in a stronger than my mother had before placed them in. My mother, surely, could not have given the particulars of what had passed between herself and me: if she had, my aunt would not have repeated many of the same sentiments, as you will find she did, that had been still more strongly urged, without effect by her venerable sister.

She said it would break the heart of my father to have it imagined that he had not a power over his own child; and that, as he thought, for my own good: a child too, whom they had always doated upon!—Dearest, dearest Miss, concluded she, clasping her fingers, with the most condescending earnestness, let me beg of you, for my sake, for your own sake, for a hundred sakes, to get over this averseness, to give up your prejudices, and make every one happy and easy once more.—I would kneel to you, my dearest Niece—nay, I will kneel to you—!

And down she dropt, and I with her, kneeling to her, and beseeching her not to kneel; clasping my arms about her, and bathing her worthy bosom with my tears.

O rise! rise! my beloved Aunt, said I: you cut me to the heart with this condescending goodness.

Say then, my dearest Niece, say then, that you will oblige all your friends!—If you love us, I beseech you do—

How can I perform what I can sooner choose to die than to perform—!

Say then, my dear, that you will consider of it. Say you will but reason with yourself. Give us but hopes. Don’t let me entreat, and thus entreat, in vain—[for still she kneeled, and I by her].

What a hard case is mine!—Could I but doubt, I know I could conquer.—That which is an inducement to my friends, is none at all to me—How often, my dearest Aunt, must I repeat the same thing?—Let me but be single—Cannot I live single? Let me be sent, as I have proposed, to Scotland, to Florence, any where: let me be sent a slave to the Indies, any where—any of these I will consent to. But I cannot, cannot think of giving my vows to man I cannot endure!

Well then, rising, (Bella silently, with uplifted hands, reproaching my supposed perverseness,) I see nothing can prevail with you to oblige us.

What can I do, my dearest Aunt Hervey? What can I do? Were I capable of giving a hope I meant not to enlarge, then could I say, I would consider of your kind advice. But I would rather be thought perverse than insincere. Is there, however, no medium? Can nothing be thought of? Will nothing do, but to have a man who is the more disgustful to me, because he is unjust in the very articles he offers?

Whom now, Clary, said my sister, do you reflect upon? Consider that.

Make not invidious applications of what I say, Bella. It may not be looked upon in the same light by every one. The giver and the accepter are principally answerable in an unjust donation. While I think of it in this light, I should be inexcusable to be the latter. But why do I enter upon a supposition of this nature?—My heart, as I have often, often said, recoils, at the thought of the man, in every light.—Whose father, but mine, agrees upon articles where there is no prospect of a liking? Where the direct contrary is avowed, all along avowed, without the least variation, or shadow of a change of sentiment?—But it is not my father’s doing originally. O my cruel, cruel brother, to cause a measure to be forced upon me, which he would not behave tolerably under, were the like to be offered to him!

The girl is got into her altitudes, Aunt Hervey, said my sister. You see, Madam, she spares nobody. Be pleased to let her know what she has to trust to. Nothing is to be done with her. Pray, Madam, pronounce her doom.

My aunt retired to the window, weeping, with my sister in her hand: I cannot, indeed I cannot, Miss Harlowe, said she, softly, (but yet I heard every word she said): there is great hardship in her case. She is a noble child after all. What pity things are gone so far!—But Mr. Solmes ought to be told to desist.