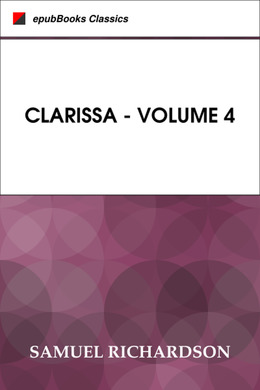 This is Volume 4 of Samuel Richardson’s classic novel; Clarissa. Pressured by her unscrupulous family to marry a wealthy man she detests, the young Clarissa Harlowe is tricked into fleeing with the witty and debonair Robert Lovelace and places herself under his protection. Lovelace, however, proves himself to be an untrustworthy rake whose vague promises of marriage are accompanied by unwelcome and increasingly brutal sexual advances. And yet, Clarissa finds his charm alluring, her scrupulous sense of virtue tinged with unconfessed desire. Told through a complex series of interweaving letters, Clarissa is a richly ambiguous study of a fatally attracted couple and a work of astonishing power and immediacy. A huge success when it first appeared in 1747, it remains one of the greatest of all novels.

At length, my dearest Miss Howe, I am in London, and in my new lodgings. They are neatly furnished, and the situation, for the town, is pleasant.

But I think you must not ask me how I like the old gentlewoman. Yet she seems courteous and obliging.—Her kinswomen just appeared to welcome me at my alighting. They seemed to be genteel young women. But more of their aunt and them, as I shall see more.

Miss Sorlings has an uncle at Barnet, whom she found so very ill, that her uneasiness, on that account, (having large expectations from him,) made me comply with her desire to stay with him. Yet I wished, as her uncle did not expect her, that she would see me settled in London; and Mr. Lovelace was still more earnest that she would, offering to send her back again in a day or two, and urging that her uncle’s malady threatened not a sudden change. But leaving the matter to her choice, after she knew what would have been mine, she made me not the expected compliment. Mr. Lovelace, however, made her a handsome present at parting.

His genteel spirit, on all occasions, makes me often wish him more consistent.

As soon as he arrived, I took possession of my apartment. I shall make good use of the light closet in it, if I stay here any time.

One of his attendants returns in the morning to The Lawn; and I made writing to you by him an excuse for my retiring.

And now give me leave to chide you, my dearest friend, for your rash, and I hope revocable resolution not to make Mr. Hickman the happiest man in the world, while my happiness is in suspense. Suppose I were to be unhappy, what, my dear, would this resolution of yours avail me? Marriage is the highest state of friendship: if happy, it lessens our cares, by dividing them, at the same time that it doubles our pleasures by a mutual participation.

Why, my dear, if you love me, will you not rather give another friend to one who has not two she is sure of? Had you married on your mother’s last birth–day, as she would have had you, I should not, I dare say, have wanted a refuge; that would have saved me many mortifications, and much disgrace.

Here I was broke in upon by Mr. Lovelace; introducing the widow leading in a kinswoman of her’s to attend me, if I approved of her, till my Hannah should come, or till I had provided myself with some other servant. The widow gave her many good qualities; but said, that she had one great defect; which was, that she could not write, nor read writing; that part of her education having been neglected when she was young; but for discretion, fidelity, obligingness, she was not to be out–done by any body. So commented her likewise for her skill at the needle.

As for her defect, I can easily forgive that. She is very likely and genteel—too genteel indeed, I think, for a servant.

But what I like least of all in her, she has a strange sly eye. I never saw such an eye; half–confident, I think. But indeed Mrs. Sinclair herself, (for that is the widow’s name,) has an odd winking eye; and her respectfulness seems too much studied, methinks, for the London ease and freedom. But people can’t help their looks, you know; and after all she is extremely civil and obliging,—and as for the young woman, (Dorcas is her name,) she will not be long with me.

I accepted her: How could I do otherwise, (if I had had a mind to make objections, which, in my present situation, I had not,) her aunt present, and the young woman also present; and Mr. Lovelace officious in his introducing them, to oblige me? But, upon their leaving me, I told him, (who seemed inclinable to begin a conversation with me,) that I desired that this apartment might be considered as my retirement: that when I saw him it might be in the dining–room, (which is up a few stairs; for this back–house, being once two, the rooms do not all of them very conveniently communicate with each other,) and that I might be as little broken in upon as possible, when I am here. He withdrew very respectfully to the door, but there stopt; and asked for my company then in the dining–room. If he were about setting out for other lodgings, I would go with him now, I told him; but, if he did not just then go, I would first finish my letter to Miss Howe.

I see he has no mind to leave me if he can help it. My brother’s scheme may give him a pretence to try to engage me to dispense with his promise. But if I now do I must acquit him of it entirely.

My approbation of his tender behaviour in the midst of my grief, has given him a right, as he seems to think, of addressing me with all the freedom of an approved lover. I see by this man, that when once a woman embarks with this sex, there is no receding. One concession is but the prelude to another with them.