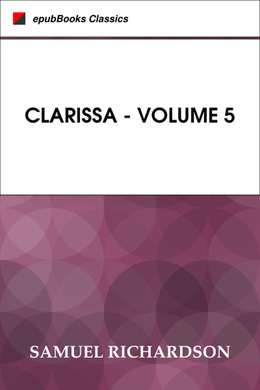 This is Volume 5 of Samuel Richardson’s classic novel; Clarissa. Pressured by her unscrupulous family to marry a wealthy man she detests, the young Clarissa Harlowe is tricked into fleeing with the witty and debonair Robert Lovelace and places herself under his protection. Lovelace, however, proves himself to be an untrustworthy rake whose vague promises of marriage are accompanied by unwelcome and increasingly brutal sexual advances. And yet, Clarissa finds his charm alluring, her scrupulous sense of virtue tinged with unconfessed desire. Told through a complex series of interweaving letters, Clarissa is a richly ambiguous study of a fatally attracted couple and a work of astonishing power and immediacy. A huge success when it first appeared in 1747, it remains one of the greatest of all novels.

Just returned from an airing with my charmer, complied with after great importunity. She was attended by the two nymphs. They both topt their parts; kept their eyes within bounds; made moral reflections now–and– then. O Jack! what devils are women, when all tests are got over, and we have completely ruined them!

The coach carried us to Hampstead, to Highgate, to Muswell–hill; back to Hampstead to the Upper–Flask: there, in compliment to the nymphs, my beloved consented to alight, and take a little repast. Then home early by Kentish–town.

Delightfully easy she, and so respectful and obliging I, all the way, and as we walked out upon the heath, to view the variegated prospects which that agreeable elevation affords, that she promised to take now–and–then a little excursion with me. I think, Miss Howe, I think, said I to myself, every now–and–then as we walked, that thy wicked devices are superceded.

But let me give thee a few particulars of our conversation in the circumrotation we took, while in the coach—She had received a letter from Miss Howe yesterday, I presumed?

She made no answer. How happy should I think myself to be admitted into their correspondence?

I would joyfully make an exchange of communications.

So, though I hoped not to succeed by her consent, [and little did she think I had so happily in part succeeded without it,] I thought it not amiss to urge for it, for several reasons: among others, that I might account to her for my constant employment at my pen; in order to take off her jealousy, that she was the subject of thy correspondence and mine: and that I might justify my secrecy and uncommunicativeness by her own.

I proceeded therefore—That I loved familiar–letter–writing, as I had more than once told her, above all the species of writing: it was writing from the heart, (without the fetters prescribed by method or study,) as the very word cor–respondence implied. Not the heart only; the soul was in it. Nothing of body, when friend writes to friend; the mind impelling sovereignly the vassal–fingers. It was, in short, friendship recorded; friendship given under hand and seal; demonstrating that the parties were under no apprehension of changing from time or accident, when they so liberally gave testimonies, which would always be ready, on failure or infidelity, to be turned against them.—For my own part, it was the principal diversion I had in her absence; but for this innocent amusement, the distance she so frequently kept me at would have been intolerable.

Sally knew my drift; and said, She had had the honour to see two or three of my letters, and of Mr. Belford’s; and she thought them the most entertaining that she had ever read.

My friend Belford, I said, had a happy talent in the letter–writing way; and upon all subjects.

I expected my beloved would have been inquisitive after our subject: but (lying perdue, as I saw) not a word said she. So I touched upon this article myself.

Our topics were various and diffuse: sometimes upon literary articles [she was very attentive upon this]; sometimes upon the public entertainments; sometimes amusing each other with the fruits of the different correspondencies we held with persons abroad, with whom we had contracted friendships; sometimes upon the foibles and perfections of our particular friends; sometimes upon our own present and future hopes; sometimes aiming at humour and raillery upon each other.—It might indeed appear to savour of vanity, to suppose my letters would entertain a lady of her delicacy and judgment: but yet I could not but say, that perhaps she would be far from thinking so hardly of me as sometimes she had seemed to do, if she were to see the letters which generally passed between Mr. Belford and me [I hope, Jack, thou hast more manners, than to give me the lie, though but in thy heart].

She then spoke: after declining my compliment in such a manner, as only a person can do, who deserved it, she said, For her part, she had always thought me a man of sense [a man of sense, Jack! What a niggardly praise!],—and should therefore hope, that, when I wrote, it exceeded even my speech: for that it was impossible, be the letters written in as easy and familiar a style as they would, but that they must have that advantage from sitting down to write them which prompt speech could not always have. She should think it very strange therefore, if my letters were barren of sentiment; and as strange, if I gave myself liberties upon premeditation, which could have no excuse at all, but from a thoughtlessness, which itself wanted excuse.