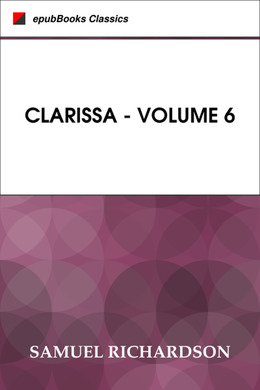 This is Volume 6 of Samuel Richardson’s classic novel; Clarissa. Pressured by her unscrupulous family to marry a wealthy man she detests, the young Clarissa Harlowe is tricked into fleeing with the witty and debonair Robert Lovelace and places herself under his protection. Lovelace, however, proves himself to be an untrustworthy rake whose vague promises of marriage are accompanied by unwelcome and increasingly brutal sexual advances. And yet, Clarissa finds his charm alluring, her scrupulous sense of virtue tinged with unconfessed desire. Told through a complex series of interweaving letters, Clarissa is a richly ambiguous study of a fatally attracted couple and a work of astonishing power and immediacy. A huge success when it first appeared in 1747, it remains one of the greatest of all novels.

No rest, says a text that I once heard preached upon, to the wicked—and I cannot close my eyes (yet only wanted to compound for half an hour in an elbow–chair)—so must scribble on.

I parted with the Captain after another strong debate with him in relation to what is to be the fate of this lady. As the fellow has an excellent head, and would have made an eminent figure in any station of life, had not his early days been tainted with a deep crime, and he detected in it; and as he had the right side of the argument; I had a good deal of difficulty with him; and at last brought myself to promise, that if I could prevail upon her generously to forgive me, and to reinstate me in her favour, I would make it my whole endeavour to get off of my contrivances, as happily as I could; (only that Lady Betty and Charlotte must come;) and then substituting him for her uncle’s proxy, take shame to myself, and marry.

But if I should, Jack, (with the strongest antipathy to the state that ever man had,) what a figure shall I make in rakish annals? And can I have taken all this pains for nothing? Or for a wife only, that, however excellent, [and any woman, do I think I could make good, because I could make any woman fear as well as love me,] might have been obtained without the plague I have been at, and much more reputably than with it? And hast thou not seen, that this haughty woman [forgive me that I call her haughty! and a woman! Yet is she not haughty?] knows not how to forgive with graciousness? Indeed has not at all forgiven me? But holds my soul in a suspense which has been so grievous to her own.

At this silent moment, I think, that if I were to pursue my former scheme, and resolve to try whether I cannot make a greater fault serve as a sponge to wipe out the less; and then be forgiven for that; I can justify myself to myself; and that, as the fair invincible would say, is all in all.

As it is my intention, in all my reflections, to avoid repeating, at least dwelling upon, what I have before written to thee, though the state of the case may not have varied; so I would have thee to re–consider the old reasonings (particularly those contained in my answer to thy last expostulatory nonsense); and add the new as they fall from my pen; and then I shall think myself invincible;—at least, as arguing rake to rake.

I take the gaining of this lady to be essential to my happiness: and is it not natural for all men to aim at obtaining whatever they think will make them happy, be the object more or less considerable in the eyes of others?

As to the manner of endeavouring to obtain her, by falsification of oaths, vows, and the like—do not the poets of two thousand years and upwards tell us, that Jupiter laughs at the perjuries of lovers? And let me add, to what I have heretofore mentioned on that head, a question or two.

Do not the mothers, the aunts, the grandmothers, the governesses of the pretty innocents, always, from their very cradles to riper years, preach to them the deceitfulness of men?—That they are not to regard their oaths, vows, promises?—What a parcel of fibbers would all these reverend matrons be, if there were not now and then a pretty credulous rogue taken in for a justification of their preachments, and to serve as a beacon lighted up for the benefit of the rest?

Do we not then see, that an honest prowling fellow is a necessary evil on many accounts? Do we not see that it is highly requisite that a sweet girl should be now–and–then drawn aside by him?—And the more eminent the girl, in the graces of person, mind, and fortune, is not the example likely to be the more efficacious?

If these postulata be granted me, who, I pray, can equal my charmer in all these? Who therefore so fit for an example to the rest of her sex? —At worst, I am entirely within my worthy friend Mandeville’s assertion, that private vices are public benefits.

Well, then, if this sweet creature must fall, as it is called, for the benefit of all the pretty fools of the sex, she must; and there’s an end of the matter. And what would there have been in it of uncommon or rare, had I not been so long about it?—And so I dismiss all further argumentation and debate upon the question: and I impose upon thee, when thou writest to me, an eternal silence on this head.

Wafer’d on, as an after–written introduction to the paragraphs which follow, marked with turned commas, [thus, ‘]:

Lord, Jack, what shall I do now! How one evil brings on another! Dreadful news to tell thee!

While I was meditating a simple robbery, here have I (in my own defence indeed) been guilty of murder!—A bl—y murder! So I believe it will prove.