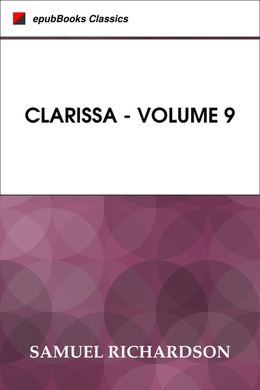 This is Volume 9 of Samuel Richardson’s classic novel; Clarissa. Pressured by her unscrupulous family to marry a wealthy man she detests, the young Clarissa Harlowe is tricked into fleeing with the witty and debonair Robert Lovelace and places herself under his protection. Lovelace, however, proves himself to be an untrustworthy rake whose vague promises of marriage are accompanied by unwelcome and increasingly brutal sexual advances. And yet, Clarissa finds his charm alluring, her scrupulous sense of virtue tinged with unconfessed desire. Told through a complex series of interweaving letters, Clarissa is a richly ambiguous study of a fatally attracted couple and a work of astonishing power and immediacy. A huge success when it first appeared in 1747, it remains one of the greatest of all novels.

The lady is still alive. The Colonel having just sent his servant to let me know that she inquired after me about an hour ago, I am dressing to attend her. Joel begs of me to dispatch him back, though but with one line to gratify your present impatience.

He expects, he says, to find you at Knightsbridge, let him make what haste he can back; and, if he has not a line or two to pacify you, he is afraid you will pistol him; for he apprehends that you are hardly yourself. I therefore dispatch this, and will have another ready, as soon as I can, with particulars.—But you must have a little patience; for how can I withdraw myself every half hour to write, if I am admitted to the lady’s presence, or if I am with the Colonel?

SMITH’S, EIGHT IN THE MORNING.

The lady is in a slumber. Mrs. Lovick, who sat up with her, says she had a better night than was expected; for although she slept little, she seemed easy; and the easier for the pious frame she was in; all her waking moments being taken up in devotion, or in an ejaculatory silence; her hands and eyes often lifted up, and her lips moving with a fervour worthy of these her last hours.

The Colonel being earnest to see his cousin as soon as she awoke, we were both admitted. We observed in her, as soon as we entered, strong symptoms of her approaching dissolution, notwithstanding what the women had flattered us with from her last night’s tranquillity.—The Colonel and I, each loth to say what we thought, looked upon one another with melancholy countenances.

The Colonel told her he should send a servant to her uncle Antony’s for some papers he had left there; and asked if she had any commands that way.

She thought not, she said, speaking more inwardly than she did the day before. She had indeed a letter ready to be sent to her good Norton; and there was a request intimated in it. But it was time enough, if the request were signified to those whom it concerned when all was over. —However, it might be sent them by the servant who was going that way. And she caused it to be given to the Colonel for that purpose.

Her breath being very short, she desired another pillow. Having two before, this made her in a manner sit up in her bed; and she spoke then with more distinctness; and, seeing us greatly concerned, forgot her own sufferings to comfort us; and a charming lecture she gave us, though a brief one, upon the happiness of a timely preparation, and upon the hazards of a late repentance, when the mind, as she observed, was so much weakened, as well as the body, as to render a poor soul hardly able to contend with its natural infirmities.

I beseech ye, my good friends, proceeded she, mourn not for one who mourns not, nor has cause to mourn, for herself. On the contrary, rejoice with me, that all my worldly troubles are so near to their end. Believe me, Sirs, that I would not, if I might, choose to live, although the pleasantest part of my life were to come over again: and yet eighteen years of it, out of nineteen, have been very pleasant. To be so much exposed to temptation, and to be so liable to fail in the trial, who would not rejoice that all her dangers are over?—All I wished was pardon and blessing from my dear parents. Easy as my departure seems promised to be, it would have been still easier, had I that pleasure. BUT GOD ALMIGHTY WOULD NOT LET ME DEPEND FOR COMFORT UPON ANY BUT HIMSELF.

She then repeated her request, in the most earnest manner, to her cousin, that he would not heighten her fault, by seeking to avenge her death; to me, that I would endeavour to make up all breaches, and use the power I had with my friend, to prevent all future mischiefs from him, as well as that which this trust might give me to prevent any to him.

She made some excuses to her cousin, for not having been able to alter her will, to join him in the executorship with me; and to me, for the trouble she had given, and yet should give me.

She had fatigued herself so much, (growing sensibly weaker) that she sunk her head upon her pillows, ready to faint; and we withdrew to the window, looking upon one another; but could not tell what to say; and yet both seemed inclinable to speak: but the motion passed over in silence. Our eyes only spoke; and that in a manner neither’s were used to—mine, at least, not till I knew this admirable creature.

The Colonel withdrew to dismiss his messenger, and send away the letter to Mrs. Norton. I took the opportunity to retire likewise; and to write thus far.

And Joel returning to take it, I now close here.