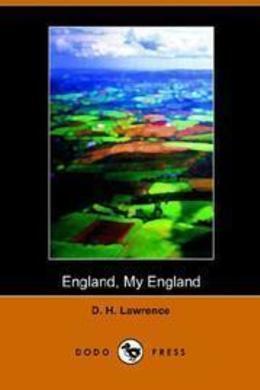 England, My England is the title of a collection of short stories by D. H. Lawrence. Individual items were originally written between 1913 and 1921, many of them against the background of World War I. Most of these versions were placed in magazines or periodicals. Ten were later selected and extensively revised by Lawrence for the England, My England volume.

He was working on the edge of the common, beyond the small brook that ran in the dip at the bottom of the garden, carrying the garden path in continuation from the plank bridge on to the common. He had cut the rough turf and bracken, leaving the grey, dryish soil bare. But he was worried because he could not get the path straight, there was a pleat between his brows. He had set up his sticks, and taken the sights between the big pine trees, but for some reason everything seemed wrong. He looked again, straining his keen blue eyes, that had a touch of the Viking in them, through the shadowy pine trees as through a doorway, at the green-grassed garden-path rising from the shadow of alders by the log bridge up to the sunlit flowers. Tall white and purple columbines, and the butt-end of the old Hampshire cottage that crouched near the earth amid flowers, blossoming in the bit of shaggy wildness round about.

There was a sound of children’s voices calling and talking: high, childish, girlish voices, slightly didactic and tinged with domineering: ‘If you don’t come quick, nurse, I shall run out there to where there are snakes.’ And nobody had the sangfroid to reply: ‘Run then, little fool.’ It was always, ‘No, darling. Very well, darling. In a moment, darling. Darling, you must be patient.’

His heart was hard with disillusion: a continual gnawing and resistance. But he worked on. What was there to do but submit!

The sunlight blazed down upon the earth, there was a vividness of flamy vegetation, of fierce seclusion amid the savage peace of the commons. Strange how the savage England lingers in patches: as here, amid these shaggy gorse commons, and marshy, snake infested places near the foot of the south downs. The spirit of place lingering on primeval, as when the Saxons came, so long ago.

Ah, how he had loved it! The green garden path, the tufts of flowers, purple and white columbines, and great oriental red poppies with their black chaps and mulleins tall and yellow, this flamy garden which had been a garden for a thousand years, scooped out in the little hollow among the snake-infested commons. He had made it flame with flowers, in a sun cup under its hedges and trees. So old, so old a place! And yet he had re-created it.

The timbered cottage with its sloping, cloak-like roof was old and forgotten. It belonged to the old England of hamlets and yeomen. Lost all alone on the edge of the common, at the end of a wide, grassy, briar-entangled lane shaded with oak, it had never known the world of today. Not till Egbert came with his bride. And he had come to fill it with flowers.

The house was ancient and very uncomfortable. But he did not want to alter it. Ah, marvellous to sit there in the wide, black, time-old chimney, at night when the wind roared overhead, and the wood which he had chopped himself sputtered on the hearth! Himself on one side the angle, and Winifred on the other.

Ah, how he had wanted her: Winifred! She was young and beautiful and strong with life, like a flame in sunshine. She moved with a slow grace of energy like a blossoming, red-flowered bush in motion. She, too, seemed to come out of the old England, ruddy, strong, with a certain crude, passionate quiescence and a hawthorn robustness. And he, he was tall and slim and agile, like an English archer with his long supple legs and fine movements. Her hair was nut-brown and all in energic curls and tendrils. Her eyes were nut-brown, too, like a robin’s for brightness. And he was white-skinned with fine, silky hair that had darkened from fair, and a slightly arched nose of an old country family. They were a beautiful couple.

The house was Winifred’s. Her father was a man of energy, too. He had come from the north poor. Now he was moderately rich. He had bought this fair stretch of inexpensive land, down in Hampshire. Not far from the tiny church of the almost extinct hamlet stood his own house, a commodious old farmhouse standing back from the road across a bare grassed yard. On one side of this quadrangle was the long, long barn or shed which he had made into a cottage for his youngest daughter Priscilla. One saw little blue-and-white check curtains at the long windows, and inside, overhead, the grand old timbers of the high-pitched shed. This was Prissy’s house. Fifty yards away was the pretty little new cottage which he had built for his daughter Magdalen, with the vegetable garden stretching away to the oak copse. And then away beyond the lawns and rose trees of the house-garden went the track across a shaggy, wild grass space, towards the ridge of tall black pines that grew on a dyke-bank, through the pines and above the sloping little bog, under the wide, desolate oak trees, till there was Winifred’s cottage crouching unexpectedly in front, so much alone, and so primitive.