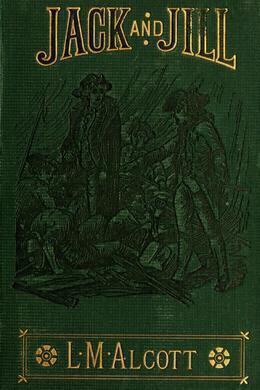 When friends Jack and Jill are injured in a sledding accident, their family and friends rally around them to help in their recovery.

“Clear the lulla!” was the general cry on a bright December afternoon, when all the boys and girls of Harmony Village were out enjoying the first good snow of the season. Up and down three long coasts they went as fast as legs and sleds could carry them. One smooth path led into the meadow, and here the little folk congregated; one swept across the pond, where skaters were darting about like water-bugs; and the third, from the very top of the steep hill, ended abruptly at a rail fence on the high bank above the road. There was a group of lads and lasses sitting or leaning on this fence to rest after an exciting race, and, as they reposed, they amused themselves with criticising their mates, still absorbed in this most delightful of out-door sports.

“Here comes Frank Minot, looking as solemn as a judge,” cried one, as a tall fellow of sixteen spun by, with a set look about the mouth and a keen sparkle of the eyes, fixed on the distant goal with a do-or-die expression.

sang out another; and down came a girl with flying hair, carrying a small boy behind her, so fat that his short legs stuck out from the sides, and his round face looked over her shoulder like a full moon.

“There’s Gus Burton; doesn’t he go it?” and such a very long boy whizzed by, that it looked almost as if his heels were at the top of the hill when his head was at the bottom!

“Hurrah for Ed Devlin!” and a general shout greeted a sweet-faced lad, with a laugh on his lips, a fine color on his brown cheek, and a gay word for every girl he passed.

“Laura and Lotty keep to the safe coast into the meadow, and Molly Loo is the only girl that dares to try this long one to the pond. I wouldn’t for the world; the ice can’t be strong yet, though it is cold enough to freeze one’s nose off,” said a timid damsel, who sat hugging a post and screaming whenever a mischievous lad shook the fence.

“No, she isn’t; here’s Jack and Jill going like fury.”

“Clear the track For jolly Jack!”

sang the boys, who had rhymes and nicknames for nearly every one.

Down came a gay red sled, bearing a boy who seemed all smile and sunshine, so white were his teeth, so golden was his hair, so bright and happy his whole air. Behind him clung a little gypsy of a girl, with black eyes and hair, cheeks as red as her hood, and a face full of fun and sparkle, as she waved Jack’s blue tippet like a banner with one hand, and held on with the other.

“Jill goes wherever Jack does, and he lets her. He’s such a good-natured chap, he can’t say ‘No.’”

“To a girl,” slyly added one of the boys, who had wished to borrow the red sled, and had been politely refused because Jill wanted it.

“He’s the nicest boy in the world, for he never gets mad,” said the timid young lady, recalling the many times Jack had shielded her from the terrors which beset her path to school, in the shape of cows, dogs, and boys who made faces and called her “‘Fraid-cat.”

“He doesn’t dare to get mad with Jill, for she’d take his head off in two minutes if he did,” growled Joe Flint, still smarting from the rebuke Jill had given him for robbing the little ones of their safe coast because he fancied it.

“She wouldn’t! she’s a dear! You needn’t sniff at her because she is poor. She’s ever so much brighter than you are, or she wouldn’t always be at the head of your class, old Joe,” cried the girls, standing by their friend with a unanimity which proved what a favorite she was.

Joe subsided with as scornful a curl to his nose as its chilly state permitted, and Merry Grant introduced a subject of general interest by asking abruptly,–

“Who is going to the candy-scrape to-night?”

“All of us. Frank invited the whole set, and we shall have a tip-top time. We always do at the Minots’,” cried Sue, the timid trembler.

“Jack said there was a barrel of molasses in the house, so there would be enough for all to eat and some to carry away. They know how to do things handsomely;” and the speaker licked his lips, as if already tasting the feast in store for him.

“Mrs. Minot is a mother worth having,” said Molly Loo, coming up with Boo on the sled; and she knew what it was to need a mother, for she had none, and tried to care for the little brother with maternal love and patience.

“She is just as sweet as she can be!” declared Merry, enthusiastically.

“Especially when she has a candy-scrape,” said Joe, trying to be amiable, lest he should be left out of the party.

Whereat they all laughed, and went gayly away for a farewell frolic, as the sun was setting and the keen wind nipped fingers and toes as well as noses.