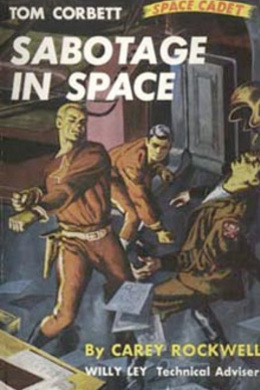 This, the seventh and final book in the Tom Corbett series is, like all these books, something special. It’s another tale of the three young men who serve in the Solar Guard as Space Cadets. It starts with cadet Roger, urm, nicking a study spool for use in a competitive exam – but that leads all of our cadets into a fight, and when they’re caught at that, a trial. In the midst of the trial they get assigned to duty on a Top Secret Projectile Project, and things go wrong there in ways at once related and impossible to connect. Someone is causing real menace to roost in the cadets’ lives, and the worst is still ahead…

With a hollow booming sound reminiscent of old eighteenth-and nineteenth-century clock towers, the electronic time tone rang out from the Tower of Galileo, chiming the hour of nine. As the notes reverberated over the vast expanse of Space Academy, U.S.A., the lights in the windows of the cadet dormitories began to wink out and the slidewalks that crisscrossed the campus, connecting the various buildings, rumbled to a halt. When the last mournful note had rolled away to die in the distant hills, the school was dark and still. The only movement to be seen was the slow pacing of the cadet watch officers, patrolling their beats; the only sound, the measured clicking of their boots on the metal strips of the slidewalks.

On the north side of the quadrangle near the Tower, a young watch officer paused in front of one of the dormitories and scanned the darkened windows of the durasteel and crystal building. Satisfied that all was in order, he continued on his lonely way. A moment later a shadowy figure rose out of the bushes opposite the dormitory entrance and stepped forward quickly and cautiously. Pausing on the slidewalk to stare after the disappearing watch officer, the figure was illuminated by the dim light from the entrance hall. He was a young man wearing the royal-blue uniform of a Space Cadet. Tall and wiry, with square features topped by a shock of close-cropped blond hair, he stood poised on the balls of his feet, ready to move quickly should another watch officer appear.

After a quick glance at his wrist chronometer, the young cadet darted across the slidewalk toward the transparent crystal portal of the dormitory. Hesitating only long enough to make certain that the inner hallway was clear, he slid the portal open, ducked inside, and sprinted down the hall toward a large black panel on the wall near the foot of the slidestairs. On the panel, in five long columns, were the name plates of every cadet quartered in the dormitory and beside each plate were two words, IN and OUT, with a small tab that fitted over one of the words.

Out of the one hundred and fifty cadets in the dormitory, one hundred and forty-nine were marked IN. The slender, blond-haired cadet quickly made it unanimous, reaching up to the tab next to the name of Roger Manning and sliding it over to cover the word OUT. With a last final look around, he raced up the slidestairs, smiling in secret triumph.

In Room 512 on the fifth floor of the dormitory, Tom Corbett and Astro, the two other cadets who, with Roger Manning, made up the famed Polaris unit of the Space Cadet Corps, were deep in their studies. Though the lights-out order had been given over the dormitory loud-speaker system, the desk lamp burned brightly and there was a blanket thrown over the window. The boys of the Polaris unit weren’t alone in their disobedience. All over the dormitory, lights were on and cadets were studying secretly. But they all felt fairly safe, for the cadet watch officers on each floor were anxious to study themselves and turned a blind eye. Even the Solar Guard officer of the day, in charge of the entire dormitory, was sympathetic to their efforts and made a great deal of unnecessary noise while on his evening rounds.

His brown curly hair falling over his forehead, Tom Corbett frowned in concentration as he kept the earphones of his study machine clamped tightly to his ears and listened to a recorded lecture on astrophysics as it unreeled from the spinning study spool. As command cadet of the Polaris unit, Tom was required to know more than merely his particular duty as pilot of a rocket ship. He had to be familiar with every phase of space travel, with a working knowledge of the duties of all his unit mates.

Astro, the power-deck officer of the unit, paced back and forth between the bunks like a huge, hulking bear, muttering to himself as he tried to memorize the table of reaction times for rocket motors. Though the huge Venusian cadet was a genius at all mechanical tasks, and able to work with tools the way a surgeon worked with instruments, he had great difficulty in learning the theories and scientific reasons for all the things he did instinctively. Suddenly Astro stopped, looked at his chronometer, then turned to Tom.

“Huh?” replied Tom, lifting one of the earphones from his ears. “What did you say, Astro?”

“He was going to get those study spools for us, wasn’t he?” mused Tom.

“He should’ve been back by now,” grunted the Venusian. “The library closed an hour ago. Besides, he couldn’t have gotten those spools. Every other cadet in the Academy is after them.”

“Well, he’s a pretty resourceful joker,” sighed Tom, turning back to the study machine. “When he goes after something, he gets it by hook or crook.”