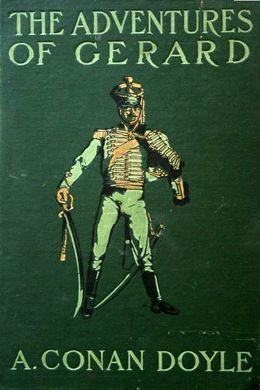 The Adventures of Gerard

Arthur Conan Doyle’s The Adventures of Gerard is an anthology of short stories about the heroics of a Hussar of the French army who lived from the 1780s to 1860s. The strategies of war and the lives of soldier are romantically described, as is the vanity of the protagonist himself, who views himself as the most gallant man in France.

It was the old Brigadier who was talking in the cafe.

I have seen a great many cities, my friends. I would not dare to tell you how many I have entered as a conqueror with eight hundred of my little fighting devils clanking and jingling behind me. The cavalry were in front of the Grande Armee, and the Hussars of Conflans were in front of the cavalry, and I was in front of the Hussars. But of all the cities which we visited Venice is the most ill-built and ridiculous. I cannot imagine how the people who laid it out thought that the cavalry could manoeuvre. It would puzzle Murat or Lassalle to bring a squadron into that square of theirs. For this reason we left Kellermann’s heavy brigade and also my own Hussars at Padua on the mainland. But Suchet with the infantry held the town, and he had chosen me as his aide-de-camp for that winter, because he was pleased about the affair of the Italian fencing-master at Milan. The fellow was a good swordsman, and it was fortunate for the credit of French arms that it was I who was opposed to him. Besides, he deserved a lesson, for if one does not like a prima donna’s singing one can always be silent, but it is intolerable that a public affront should be put upon a pretty woman. So the sympathy was all with me, and after the affair had blown over and the man’s widow had been pensioned Suchet chose me as his own galloper, and I followed him to Venice, where I had the strange adventure which I am about to tell you.

You have not been to Venice? No, for it is seldom that the French travel. We were great travellers in those days. From Moscow to Cairo we had travelled everywhere, but we went in larger parties than were convenient to those whom we visited, and we carried our passports in our limbers. It will be a bad day for Europe when the French start travelling again, for they are slow to leave their homes, but when they have done so no one can say how far they will go if they have a guide like our little man to point out the way. But the great days are gone and the great men are dead, and here am I, the last of them, drinking wine of Suresnes and telling old tales in a cafe.

But it is of Venice that I would speak. The folk there live like water-rats upon a mud-bank, but the houses are very fine, and the churches, especially that of St. Mark, are as great as any I have seen. But above all they are proud of their statues and their pictures, which are the most famous in Europe. There are many soldiers who think that because one’s trade is to make war one should never have a thought above fighting and plunder. There was old Bouvet, for example–the one who was killed by the Prussians on the day that I won the Emperor’s medal; if you took him away from the camp and the canteen, and spoke to him of books or of art, he would sit and stare at you. But the highest soldier is a man like myself who can understand the things of the mind and the soul. It is true that I was very young when I joined the army, and that the quarter-master was my only teacher, but if you go about the world with your eyes open you cannot help learning a great deal.

Thus I was able to admire the pictures in Venice, and to know the names of the great men, Michael Titiens, and Angelus, and the others, who had painted them. No one can say that Napoleon did not admire them also, for the very first thing which he did when he captured the town was to send the best of them to Paris. We all took what we could get, and I had two pictures for my share.

One of them, called “Nymphs Surprised,” I kept for myself, and the other, “Saint Barbara,” I sent as a present for my mother.

It must be confessed, however, that some of our men behaved very badly in this matter of the statues and the pictures. The people at Venice were very much attached to them, and as to the four bronze horses which stood over the gate of their great church, they loved them as dearly as if they had been their children. I have always been a judge of a horse, and I had a good look at these ones, but I could not see that there was much to be said for them. They were too coarse-limbed for light cavalry charges and they had not the weight for the gun-teams.

However, they were the only four horses, alive or dead, in the whole town, so it was not to be expected that the people would know any better. They wept bitterly when they were sent away, and ten French soldiers were found floating in the canals that night. As a punishment for these murders a great many more of their pictures were sent away, and the soldiers took to breaking the statues and firing their muskets at the stained-glass windows.

This made the people furious, and there was very bad feeling in the town. Many officers and men disappeared during that winter, and even their bodies were never found.