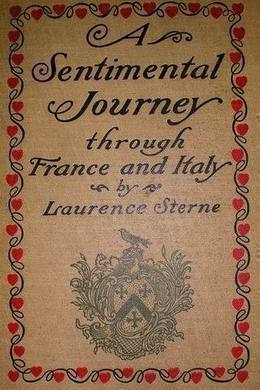 Through France and Italy

Laurence Sterne’s revolutionary novel The Life and Opinions of Tristram Shandy, Gentleman plays with time, space, narrative conceits, and the very concept of the novel itself-it has dramatically affected the course of English-language fiction in the centuries since, with works from writers such as James Joyce and Thomas Pynchon showing his influence. A Sentimental Journey Through France and Italy is the thematic sequel, a tale of a minor character from Shandy that is its own frolic of experimental fiction. Though less well known than its celebrated predecessor, this is an equally startling and frantically imaginative work from a writer some consider a comic genius.

They order, said I, this matter better in France.–You have been in France? said my gentleman, turning quick upon me, with the most civil triumph in the world.–Strange! quoth I, debating the matter with myself, That one and twenty miles sailing, for ‘tis absolutely no further from Dover to Calais, should give a man these rights: – I’ll look into them: so, giving up the argument,–I went straight to my lodgings, put up half a dozen shirts and a black pair of silk breeches,–“the coat I have on,” said I, looking at the sleeve, “will do;”–took a place in the Dover stage; and the packet sailing at nine the next morning,–by three I had got sat down to my dinner upon a fricaseed chicken, so incontestably in France, that had I died that night of an indigestion, the whole world could not have suspended the effects of the droits d’aubaine;–my shirts, and black pair of silk breeches,–portmanteau and all, must have gone to the King of France;–even the little picture which I have so long worn, and so often have told thee, Eliza, I would carry with me into my grave, would have been torn from my neck!–Ungenerous! to seize upon the wreck of an unwary passenger, whom your subjects had beckoned to their coast!–By heaven! Sire, it is not well done; and much does it grieve me, ‘tis the monarch of a people so civilized and courteous, and so renowned for sentiment and fine feelings, that I have to reason with! -

But I have scarce set a foot in your dominions. -

When I had fished my dinner, and drank the King of France’s health, to satisfy my mind that I bore him no spleen, but, on the contrary, high honour for the humanity of his temper,–I rose up an inch taller for the accommodation.

When man is at peace with man, how much lighter than a feather is the heaviest of metals in his hand! he pulls out his purse, and holding it airily and uncompressed, looks round him, as if he sought for an object to share it with.–In doing this, I felt every vessel in my frame dilate,–the arteries beat all cheerily together, and every power which sustained life, performed it with so little friction, that ‘twould have confounded the most physical precieuse in France; with all her materialism, she could scarce have called me a machine. -

I’m confident, said I to myself, I should have overset her creed.

The accession of that idea carried nature, at that time, as high as she could go;–I was at peace with the world before, and this finish’d the treaty with myself. -

I had scarce uttered the words, when a poor monk of the order of St. Francis came into the room to beg something for a his convent. No man cares to have his virtues the sport of contingencies–or one man may be generous, as another is puissant;–sed non quoad hanc– or be it as it may,–for there is no regular reasoning upon the ebbs and flows of our humours; they may depend upon the same causes, for aught I know, which influence the tides themselves: ‘twould oft be no discredit to us, to suppose it was so: I’m sure at least for myself, that in many a case I should be more highly satisfied, to have it said by the world, “I had had an affair with the moon, in which there was neither sin nor shame,” than have it pass altogether as my own act and deed, wherein there was so much of both.

The monk, as I judged by the break in his tonsure, a few scattered white hairs upon his temples, being all that remained of it, might be about seventy;–but from his eyes, and that sort of fire which was in them, which seemed more temper’d by courtesy than years, could be no more than sixty: –Truth might lie between–He was certainly sixty-five; and the general air of his countenance, notwithstanding something seem’d to have been planting-wrinkles in it before their time, agreed to the account.