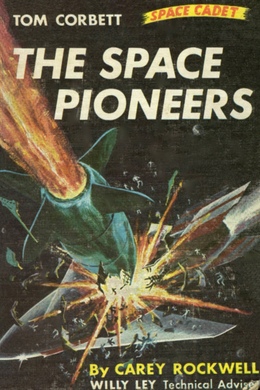 This, the fourth book in the Tom Corbett series by Carey Rockwell, is, like all of the Tom Corbett books, something special. It’s another tale of the three young men who serve in the Solar Guard as Space Cadets. The Solar Guard is establishing its first colony on a star far away in space, and of course, our heroes are in on the mission. But somehow a villain named Paul Vidac has wormed his way into the Cadets’ assignment – replacing Capt. Strong as Lt. Governor. The man means nothing but evil, and if the cadets don’t catch him at it, it’ll be the end of them for certain…

“Go on, Astro,” shouted the young Space Cadet. “Boot that screwy ball with everything you’ve got!”

The three cadets of the Polaris unit raced down the Academy field toward the mercuryball, a plastic sphere with a vial of mercury inside. At the opposite end of the field, three members of the Arcturus unit ran headlong in a desperate effort to reach the ball first.

Astro, the giant Space Cadet from Venus, charged toward the ball like a blazing rocket, while his two unit mates flanked him, ready to block out their opponents and give Astro a clear shot at the ball.

On the left wing, Tom Corbett, curly-haired and snub-nosed, ran lightly down the field, while on the opposite wing, Roger Manning, his blond hair cut crew style, kept pace with him easily. The two teams closed. Roger threw a perfect block on his opposing wingman and the two boys went down in a heap. Tom side-stepped the Arcturus cadet on his side and sent him sprawling to the ground. He quickly cut across the field and threw his body headlong at the last remaining member of the opposition. Astro was free to kick the ball perfectly for a fifty-yard goal.

Jogging back toward their own goal line, the three Polaris cadets congratulated each other. Astro’s kick had tied the score, two-all.

“That was some feint you pulled on Richards, Tom,” said Roger. “You sucked him in beautifully. I thought he was going to tear up the field with his nose!”

Tom grinned. Compliments from Roger were few and far between.

Astro clapped his hands together and roared, “All right, fellas, let’s see if we can’t take these space bums again! Another shot at the goal–that’s all I need!”

Lining up at the end of the field again, the cadets kept their eyes on the cadet referee on the side lines. They saw him hold up his hand and then drop it suddenly. Once again the teams raced toward the ball in the middle of the field. When they met, Roger tried to duplicate Tom’s feat and feint his opponent, but the other cadet was ready for the maneuver and stopped dead in his tracks. Roger was forced to break stride just long enough for the Arcturus cadet to dump him to the ground and then race for Astro. Tom, covering Astro on the left wing, saw the cadet sweeping in and lunged in a desperate attempt to stop him. But he missed, leaving Astro unprotected against the three members of the Arcturus unit. With his defense gone, Astro kicked at the ball frantically but just grazed the side of it. The mercury inside the ball began to play its role in the game, and as though it had a brain of its own, the ball spun, stopped, bounced, and spiraled in every direction, with the cadets kicking, lunging, and scrambling for a clean shot. Finally Astro reached the tumbling sphere and booted it away from the group. There was a roar of laughter from the Arcturus unit and a low groan from Tom and Roger. Astro saw that he had kicked the ball over his own goal line.

“Why, you clobber-headed Venusian hick!” yelled Roger. “Can’t you tell the difference between our goal and theirs?”

Astro grinned sheepishly as the three jogged back to their own goal to line up once more.

“Lay off, Roger,” said Tom. “How come you didn’t get Richards on that play?”

“I slipped,” replied the blond cadet.

“Yeah, you slipped all right,” growled Astro good-naturedly, “with a great big assist from Richards.”

“Ah, go blast your jets,” grumbled Roger. “Come on! Let’s show those space crawlers what this game is all about!”

But before the cadet referee could drop his hand, a powerful, low-slung jet car, its exhaust howling, pulled to a screeching stop at the edge of the field and a scarlet-clad enlisted Solar Guardsman jumped out and spoke to him. Sensing that it was something important, the two teams jogged over to surround the messenger.

The enlisted spaceman, an Earthworm cadet who had washed out of the Academy but had re-enlisted in the Solar Guard, smiled. “Orders for the Polaris unit,” he said, “from Captain Strong.”

“What about?” asked Roger.

“Report on the double for new assignments,” replied the guardsman.

“Yeeeeooooow!” Astro roared in jubilation. “At last we can get out of here. I’ve been doing so blamed much classroom work, I’ve forgotten what space looks like.”

“Uh-uh.” Joe shook his head. He turned away, then stopped, and called back, “Want a lift back to the Tower?”

Before Tom could answer, Richards, the captain of the Arcturus unit spoke up. “How about finishing the game, Tom? It’s been so long since we’ve had such good competition we hate to lose you. Come on. Only a few more minutes.”

Tom hesitated. It had been a long time since the two units had played together, but orders were orders. He looked at Roger and Astro. “Well, what about it?”

“Sure,” said Roger. “We’ll wipe up these space jokers in nothing flat! Come on!”