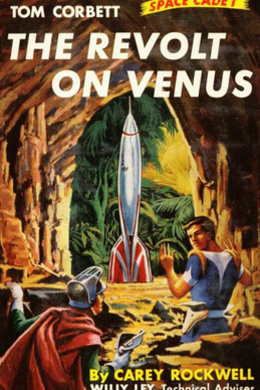 The Revolt on Venus

For the young cadets of the famous Space Academy Polaris unit a month’s leave would seem to be a perfect time for rest. But they have other ideas when they plan a trip to the jungles of Venus. There they hope to hunt the most terrifying of all big game––the mighty Tyrannosaurus Rex!

The tall, broad-shouldered officer, wearing the magnificent black-and-gold uniform of the Solar Guard, spoke into a small microphone and waited for an acknowledgment. It came almost immediately.

“Cadet Corbett ready for testing,” a voice crackled thinly over the loud-speaker.

Seated in front of the scanner screen on the control deck of the rocket cruiser Polaris, Captain Steve Strong replaced the microphone in its slot and watched a bulky figure in a space suit step out of the air lock and drift away from the side of the ship. Behind him, five boys, all dressed in the vivid blue uniforms of the Space Cadet Corps, strained forward to watch the lone figure adjust the nozzles of the jet unit on the back of his space suit.

“Come on, Tom!” said the biggest of the five boys, his voice a low, powerful rumble as he rooted for his unit mate.

“If Tom makes this one,” crowed the cadet next to him, a slender boy with a thick shock of close-cropped blond hair, “the Polaris unit is home free!”

“This is the last test, Manning,” replied one of the remaining three cadets, the insigne of the Arcturus unit on the sleeve of his uniform. “If Corbett makes this one, you fellows deserve to win.”

Aboard the rocket cruiser Polaris, blasting through the black void of space two hundred miles above Earth, six Space Cadets and a Solar Guard officer were conducting the final test for unit honors for the term. All other Academy units had been eliminated in open competition. Now, the results of the individual space orientation test would decide whether the three cadets of the Arcturus unit or the three cadets of the Polaris unit would win final top unit honors.

Roger Manning and Astro kept their eyes glued to the telescanner screen, watching their unit mate, Tom Corbett, drift slowly through space toward his starting position. The young cadet’s task was basically simple; with his space helmet blacked out so that he could not see in any direction, he was to make his way back to the ship from a point a mile away, guided only by the audio orders from the examining officer aboard the ship. His score was measured by the time elapsed, and the amount of corrections and orders given by the examining officer. It was an exercise designed to test a cadet’s steadiness under emergency conditions of space.

The three members of the Arcturus unit had completed their runs and had returned to the ship in excellent time. Roger and Astro had also taken their tests and now it depended on Tom. If he could return to the Polaris in less than ten minutes, with no more than three corrections, the Polaris unit would be victorious.

Seated directly in front of the scanner, Captain Steve Strong, the examining officer, watched the space-suited figure dwindle to a mere speck on the screen. As the regular skipper of the Polaris crew, he could not help secretly rooting for Tom, but he was determined to be fair, even to the extent of declaring the Arcturus unit the winner, should the decision be very close. He leaned forward to adjust the focus on the scanner, bringing the drifting figure into a close-up view, and then lifted the microphone to his lips.

“Stand by, Corbett!” he called. “You’re getting close to range.”

Behind Strong, Roger and Astro looked at each other and turned back to the screen. As one, they crossed the fingers of both hands.

As the signal echoed in his blacked-out space helmet, Tom jerked his body around in a sudden violent move, and grasping the valve of the jet unit on his back, he opened it halfway. He waited, holding his breath, expecting to hear Captain Strong correct his course. He counted to ten slowly, and when no correction came over the headphones, he opened the valve wide and blindly shot through space.

Aboard the Polaris, Astro and Roger shouted with joy and Strong could not repress a grin. The tiny figure on the scanner was hurtling straight for the side of the Polaris!

As the image grew larger and larger, anxious eyes swiveled back and forth from the scanner screen to the steady sweeping hand of the chronometer. Roger bit his lip nervously, and Astro’s hands trembled.

When Tom reached a point five hundred feet away from the ship, Strong flipped open the audio circuit and issued his first order.