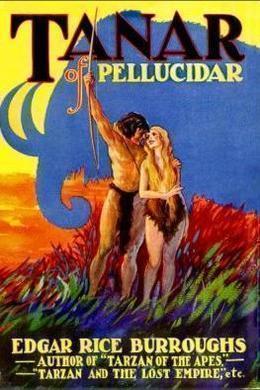 Pellucidar - the hollow center of the Earth, a land of savage men and prehistoric beasts - is the scene of this exciting novel. In Pellucidar dwell the Buried People; here is the Land of Awful Sorrow; here the terrible Korsars terrorise the oceans, while dinosaurs and saber-tooth tigers terrorise the lands. This is the story of Tanar, a young chief, and the cave girl Stellara, and of their struggle for survival against a myriad dangers.

The great ship trembled to the recoil of the cannon; the rattle of musketry. The roar of the guns aboard her sister ships and the roar of her own were deafening. Below decks the air was acrid with the fumes of burnt powder.

Tanar of Pellucidar, chained below with other prisoners, heard these sounds and smelled the smoke. He heard the rattle of the anchor chain; he felt the straining of the mast to which his shackles were bent and the altered motion of the hull told him that the ship was under way.

Presently the firing ceased and the regular rising and falling of the ship betokened that it was on its course. In the darkness of the hold Tanar could see nothing. Sometimes the prisoners spoke to one another, but their thoughts were not happy ones, and so, for the most part, they remained silent–waiting. For what?

Presently a hatch was raised and men came with food and water–poor, rough food and water that smelled bad and tasted worse; but it was water and they were thirsty.

One of the men said: “Where is he who is called Tanar?”

“I am Tanar,” replied the son of Ghak.

“You are wanted on deck,” said the man, and with a huge key he unlocked the massive, hand-wrought lock that held Tanar chained to the mast. “Follow me!”

The bright light of Pellucidar’s perpetual day blinded the Sarian as he clambered to the deck from the dark hole in which he had been confined and it was a full minute before his eyes could endure the light, but his guard hustled him roughly along and Tanar was already stumbling up the long stairs leading to the high deck at the ship’s stern before he regained the use of his eyes.

As he mounted the highest deck he saw the chiefs of the Korsar horde assembled and with them were two women. One appeared elderly and ill favored, but the other was young and beautiful, but for neither did Tanar have any eyes–he was interested only in the enemy men, for these he could fight, these he might kill, which was the sole interest that an enemy could hold for Tanar, the Sarian, and being what he was Tanar could not fight women, not even enemy women; but he could ignore them, and did. He was led before a huge fellow whose bushy whiskers almost hid his face–a great, blustering fellow with a scarlet scarf bound about his head. But for an embroidered, sleeveless jacket, open at the front, the man was naked above the waist, about which was wound another gaudy sash into which were stuck two pistols and as many long knives, while at his side dangled a cutlass, the hilt of which was richly ornamented with inlays of pearl and semiprecious stones.

A mighty man was The Cid, Chief of the Korsars–a burly, blustering, bully of a man, whose position among the rough and quarrelsome Korsars might be maintained only by such as he.

Surrounding him upon the high poop of his ship was a company of beefy ruffians of similar mold, while far below, in the waist of the vessel, a throng of lesser cutthroats, the common sailors, escaped from the dangers and demands of an arduous campaign, relaxed according to their various whims.

Stark brutes were most of these, naked but for shorts and the inevitable gaudy sashes and head cloths–an unlovely company, yet picturesque.

At The Cid’s side stood a younger man who well could boast as hideous a countenance as any sun ever shone upon, for across a face that might have taxed even a mother’s love, ran a repulsive scar from above the left eye to below the right hand corner of the mouth, cleaving the nose with a deep, red gash. The left eye was lidless and gazed perpetually upward and outward, as a dead eye might, while the upper lip was permanently drawn upward at the right side in a sardonic sneer that exposed a single fang-like tooth. No, Bohar the Bloody was not beautiful.

Before these two, The Cid and The Bloody One, Tanar was roughly dragged.

“They call you Tanar?” bellowed The Cid.

“And you are the son of a king!” and he laughed loudly. “With a ship’s company I could destroy your father’s entire kingdom and make a slave of him, as I have of his son.”

“You had many ship’s companies,” replied Tanar; “but I did not see any of them destroying the kingdom of Sari. The army that chased them into the ocean was commanded by my father, under the Emperor.”

The Cid scowled. “I have made men walk the plank for less than that,” he growled.

“I do not know what you mean,” said Tanar.

“You shall,” barked The Cid; “and then, by the beard of the sea god, you’ll keep a civil tongue in your head. Hey!” he shouted to one of his officers, “have a prisoner fetched and the plank run out. We’ll show this son of a king who The Cid is and that he is among real men now.”