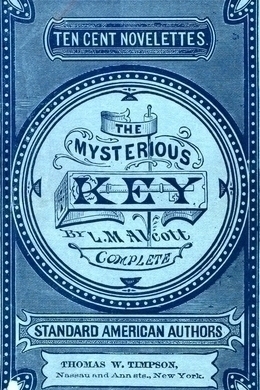 And what it Opened

A short novella set in England, Louisa May Alcott’s The Mysterious Key and What It Opened is a classic tale for children about a person who must look for a family-tomb to find love. A story of hidden ties and of prophesies, and the tragedy of life and death the silver key unlocked.

This is the third time I’ve found you poring over that old rhyme. What is the charm, Richard? Not its poetry I fancy.” And the young wife laid a slender hand on the yellow, time–worn page where, in Old English text, appeared the lines she laughed at.

Richard Trevlyn looked up with a smile and threw by the book, as if annoyed at being discovered reading it. Drawing his wife’s hand through his own, he led her back to her couch, folded the soft shawls about her, and, sitting in a low chair beside her, said in a cheerful tone, though his eyes betrayed some hidden care, “My love, that book is a history of our family for centuries, and that old prophecy has never yet been fulfilled, except the ‘heir and heiress’ line. I am the last Trevlyn, and as the time draws near when my child shall be born, I naturally think of his future, and hope he will enjoy his heritage in peace.”

“God grant it!” softly echoed Lady Trevlyn, adding, with a look askance at the old book, “I read that history once, and fancied it must be a romance, such dreadful things are recorded in it. Is it all true, Richard?”

“Yes, dear. I wish it was not. Ours has been a wild, unhappy race till the last generation or two. The stormy nature came in with old Sir Ralph, the fierce Norman knight, who killed his only son in a fit of wrath, by a blow with his steel gauntlet, because the boy’s strong will would not yield to his.”

“Yes, I remember, and his daughter Clotilde held the castle during a siege, and married her cousin, Count Hugo. ‘Tis a warlike race, and I like it in spite of the mad deeds.”

“Married her cousin! That has been the bane of our family in times past. Being too proud to mate elsewhere, we have kept to ourselves till idiots and lunatics began to appear. My father was the first who broke the law among us, and I followed his example: choosing the freshest, sturdiest flower I could find to transplant into our exhausted soil.”

“I hope it will do you honor by blossoming bravely. I never forget that you took me from a very humble home, and have made me the happiest wife in England.”

“And I never forget that you, a girl of eighteen, consented to leave your hills and come to cheer the long–deserted house of an old man like me,” returned her husband fondly.

“Nay, don’t call yourself old, Richard; you are only forty–five, the boldest, handsomest man in Warwickshire. But lately you look worried; what is it? Tell me, and let me advise or comfort you.”

“It is nothing, Alice, except my natural anxiety for you—Well, Kingston, what do you want?”

Trevlyn’s tender tones grew sharp as he addressed the entering servant, and the smile on his lips vanished, leaving them dry and white as he glanced at the card he handed him. An instant he stood staring at it, then asked, “Is the man here?”

Flinging the card into the fire, he watched it turn to ashes before he spoke, with averted eyes: “Only some annoying business, love; I shall soon be with you again. Lie and rest till I come.”

With a hasty caress he left her, but as he passed a mirror, his wife saw an expression of intense excitement in his face. She said nothing, and lay motionless for several minutes evidently struggling with some strong impulse.

“He is ill and anxious, but hides it from me; I have a right to know, and he’ll forgive me when I prove that it does no harm.”

As she spoke to herself she rose, glided noiselessly through the hall, entered a small closet built in the thickness of the wall, and, bending to the keyhole of a narrow door, listened with a half–smile on her lips at the trespass she was committing. A murmur of voices met her ear. Her husband spoke oftenest, and suddenly some word of his dashed the smile from her face as if with a blow. She started, shrank, and shivered, bending lower with set teeth, white cheeks, and panic–stricken heart. Paler and paler grew her lips, wilder and wilder her eyes, fainter and fainter her breath, till, with a long sigh, a vain effort to save herself, she sank prone upon the threshold of the door, as if struck down by death.

“Mercy on us, my lady, are you ill?” cried Hester, the maid, as her mistress glided into the room looking like a ghost, half an hour later.

“I am faint and cold. Help me to my bed, but do not disturb Sir Richard.”

A shiver crept over her as she spoke, and, casting a wild, woeful look about her, she laid her head upon the pillow like one who never cared to lift it up again. Hester, a sharp–eyed, middle–aged woman, watched the pale creature for a moment, then left the room muttering, “Something is wrong, and Sir Richard must know it. That black–bearded man came for no good, I’ll warrant.”

At the door of the library she paused.