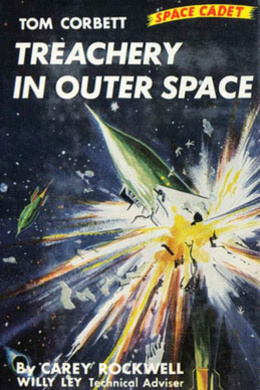 This, the sixth book in the Tom Corbett series is, something special. It’s another tale of the three young men who serve in the Solar Guard as Space Cadets. The Titan crystal freight contracts are up for bid, and the powers that be have decided to put the contracts out competitively to the folks who can deliver fastest – and of course there’s fishy business underway. Not only are folks attempting to cheat the competition, but darker business is about to begin…

“All right, you blasted Earthworms! Stand to!”

Three frightened cadet candidates for Space Academy stiffened their backs and stood at rigid attention as Astro faced them, a furious scowl on his rugged features. Behind him, Tom Corbett and Roger Manning lounged on the dormitory bunks, watching their unit mate blast the freshman cadets and trying to keep from laughing. It wasn’t long ago that they had gone through the terrifying experience of being hazed by stern upperclassmen and they knew how the three pink-cheeked boys in front of them felt.

Neither of the three boys answered.

“Speak when you’re spoken to, Mister!” snapped Roger at the boy in the middle.

“Answer the question!” barked Tom, finding it difficult to maintain his role of stern disciplinarian.

“Yes … all right … fine.” The boy’s face was flushed with desperation.

Astro stepped forward, his chin jutting out. “For your information,” he bawled, “the correct manner of address is ‘Very well.’”

Astro shook his head and turned back to Tom and Roger. “Have you ever seen a greater display of audacity and sheer gall?” he demanded. “The nerve of these three infants assuming that they could ever become Space Cadets!”

Tom and Roger laughed, not at the three Earthworms, but at Astro’s sudden eloquence. The giant Venusian cadet usually limited his comments to a gruff Yes or No, or at most, a garbled sentence full of a veteran spaceman’s oaths. Then, resuming his stern expression, Roger faced the three boys.

“Sound off! Quick!” he demanded.

“You call those names?” Roger snorted incredulously. “Which of you ground crawlers is radar officer?”

“I am, very well,” replied Spears.

The blond-haired cadet stared at him in amazement.

“Very well, what?” he demanded.

Roger turned to Tom. “Well, thump my rockets,” he exclaimed, “I didn’t know they made them that dumb any more!”

“Who is the command cadet?” asked Tom, suppressing a grin.

“Fast is as fast must be, without being either supersonic or turgid. Fast is necessarily that amount of speed that will not be the most nor the least, yet will be sufficient unto the demands of fast … “ Duke quoted directly from the Earthworm Manual, a book that was not prescribed learning in the Academy, but woe unto the Earthworm who did not know it by heart when questioned by a cadet upperclassman.

“What is a blip on a radar, Mister?” demanded Roger of Spears.

“You don’t know?” yelled Roger. He looked at Tom and Astro, shaking his head. “He doesn’t know.” The two cadets frowned at the quivering boy and Roger faced him again. “For your information, Mr. Spears,” he said at his sarcastic best, “there are five words remaining in that sentence. And for each word, you will spend one hour cleaning this room. Is that clear?”

Spears could only nod his head.

“And for your further information,” continued Roger, “the remaining words are ‘constantly alert to constant dangers’! Does that help you, Mister?”

“Yes, Cadet Manning,” gulped Spears. “You are very kind to give me this information. And it will be a great honor to clean your room.”

Astro stepped forward to take his turn. He towered over the remaining cadet candidate and glowered at the thoroughly frightened boy. “So,” he roared, “I guess this means you’re going to handle the power deck in one of our space buckets, eh?”

“Give me the correction of thrust when you are underway in a forward motion and you receive orders from the control deck for immediate reversal.”

Coglin closed his eyes, took a deep breath, and the words poured from his lips. “To go forward is to overtake space, and to go sternward is to retake space already overtaken. To correct thrust, I would figure in the beginning of my flight how much space I intended to take and how much I would retake, and since overtake and retake are both additional quotients that have not been divided, I will add them together and arrive at a correction.” The cadet candidate stopped abruptly, gasping for breath.