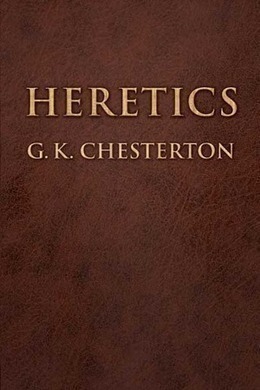 G. K. Chesterton, the “Prince of Paradox”, is at his witty best in this collection of twenty essays and articles from the turn of the twentieth century. Focusing on “heretics” — those who pride themselves on their superiority to conservative views — Chesterton appraises prominent figures who fall into that category from the literary and art worlds. Luminaries such as Rudyard Kipling, George Bernard Shaw, H. G. Wells, and James McNeill Whistler come under the author’s scrutiny, where they meet with equal measures of his characteristic wisdom and good humor.

In addition to incisive assessments of well-known individuals (“Mr. Rudyard Kipling and Making the World Small” and “Mr. H. G. Wells and the Giants”), these essays contain observations on the wider world. On Sandals and Simplicity, Science and the Savages, On Certain Modern Writers and the Institution of the Family, On Smart Novelists and the Smart Set, and Slum Novelists and the Slums, reflect the main themes of Chesterton’s life’s work. Heretics roused the ire of some critics for censuring contemporary philosophies without providing alternatives; the author responded a few years later with a companion volume, Orthodoxy.

Nothing more strangely indicates an enormous and silent evil of modern society than the extraordinary use which is made nowadays of the word “orthodox.” In former days the heretic was proud of not being a heretic. It was the kingdoms of the world and the police and the judges who were heretics. He was orthodox. He had no pride in having rebelled against them; they had rebelled against him. The armies with their cruel security, the kings with their cold faces, the decorous processes of State, the reasonable processes of law–all these like sheep had gone astray. The man was proud of being orthodox, was proud of being right. If he stood alone in a howling wilderness he was more than a man; he was a church. He was the centre of the universe; it was round him that the stars swung. All the tortures torn out of forgotten hells could not make him admit that he was heretical. But a few modern phrases have made him boast of it. He says, with a conscious laugh, “I suppose I am very heretical,” and looks round for applause. The word “heresy” not only means no longer being wrong; it practically means being clear-headed and courageous. The word “orthodoxy” not only no longer means being right; it practically means being wrong. All this can mean one thing, and one thing only. It means that people care less for whether they are philosophically right. For obviously a man ought to confess himself crazy before he confesses himself heretical. The Bohemian, with a red tie, ought to pique himself on his orthodoxy. The dynamiter, laying a bomb, ought to feel that, whatever else he is, at least he is orthodox.

It is foolish, generally speaking, for a philosopher to set fire to another philosopher in Smithfield Market because they do not agree in their theory of the universe. That was done very frequently in the last decadence of the Middle Ages, and it failed altogether in its object. But there is one thing that is infinitely more absurd and unpractical than burning a man for his philosophy. This is the habit of saying that his philosophy does not matter, and this is done universally in the twentieth century, in the decadence of the great revolutionary period. General theories are everywhere contemned; the doctrine of the Rights of Man is dismissed with the doctrine of the Fall of Man. Atheism itself is too theological for us to-day. Revolution itself is too much of a system; liberty itself is too much of a restraint. We will have no generalizations. Mr. Bernard Shaw has put the view in a perfect epigram: “The golden rule is that there is no golden rule.” We are more and more to discuss details in art, politics, literature. A man’s opinion on tramcars matters; his opinion on Botticelli matters; his opinion on all things does not matter. He may turn over and explore a million objects, but he must not find that strange object, the universe; for if he does he will have a religion, and be lost. Everything matters–except everything.

Examples are scarcely needed of this total levity on the subject of cosmic philosophy. Examples are scarcely needed to show that, whatever else we think of as affecting practical affairs, we do not think it matters whether a man is a pessimist or an optimist, a Cartesian or a Hegelian, a materialist or a spiritualist. Let me, however, take a random instance. At any innocent tea-table we may easily hear a man say, “Life is not worth living.” We regard it as we regard the statement that it is a fine day; nobody thinks that it can possibly have any serious effect on the man or on the world. And yet if that utterance were really believed, the world would stand on its head. Murderers would be given medals for saving men from life; firemen would be denounced for keeping men from death; poisons would be used as medicines; doctors would be called in when people were well; the Royal Humane Society would be rooted out like a horde of assassins. Yet we never speculate as to whether the conversational pessimist will strengthen or disorganize society; for we are convinced that theories do not matter.