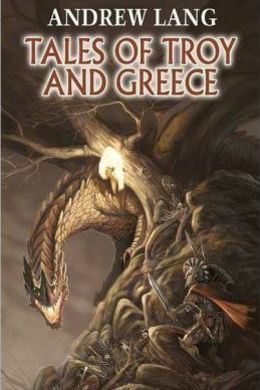 Tales of Troy and Greece

Andrew Lang draws on his classical learning to recount the Homeric legend of the wars between the Greeks and the Trojans. Paris, Helen of Troy, Achilles, Hector, Ulysses, the Amazons and the Wooden Horse all figure in this magical introduction to one of the greatest legends ever told. Superbly illustrated by H. J. Ford, Lang draws masterfully upon his classical training to bring to life some of the central stories of Greek mythology. Readers will follow the exciting adventures of Ulysses from his boyhood through his perilous return from the Trojan War, meet the lovely Helen of Troy, hear about the amazing Trojan horse, join Jason on his determined quest for the Golden Fleece, encounter the fierce, beautiful Amazons, and learn about the legendary deeds of other remarkable Greek heroes.

Long ago, in a little island called Ithaca, on the west coast of Greece, there lived a king named Laertes. His kingdom was small and mountainous. People used to say that Ithaca ‘lay like a shield upon the sea,’ which sounds as if it were a flat country. But in those times shields were very large, and rose at the middle into two peaks with a hollow between them, so that Ithaca, seen far off in the sea, with her two chief mountain peaks, and a cloven valley between them, looked exactly like a shield. The country was so rough that men kept no horses, for, at that time, people drove, standing up in little light chariots with two horses; they never rode, and there was no cavalry in battle: men fought from chariots. When Ulysses, the son of Laertes, King of Ithaca grew up, he never fought from a chariot, for he had none, but always on foot.

If there were no horses in Ithaca, there was plenty of cattle. The father of Ulysses had flocks of sheep, and herds of swine, and wild goats, deer, and hares lived in the hills and in the plains. The sea was full of fish of many sorts, which men caught with nets, and with rod and line and hook.

Thus Ithaca was a good island to live in. The summer was long, and there was hardly any winter; only a few cold weeks, and then the swallows came back, and the plains were like a garden, all covered with wild flowers–violets, lilies, narcissus, and roses. With the blue sky and the blue sea, the island was beautiful. White temples stood on the shores; and the Nymphs, a sort of fairies, had their little shrines built of stone, with wild rose-bushes hanging over them.

Other islands lay within sight, crowned with mountains, stretching away, one behind the other, into the sunset. Ulysses in the course of his life saw many rich countries, and great cities of men, but, wherever he was, his heart was always in the little isle of Ithaca, where he had learned how to row, and how to sail a boat, and how to shoot with bow and arrow, and to hunt boars and stags, and manage his hounds.

The mother of Ulysses was called Anticleia: she was the daughter of King Autolycus, who lived near Parnassus, a mountain on the mainland. This King Autolycus was the most cunning of men. He was a Master Thief, and could steal a man’s pillow from under his head, but he does not seem to have been thought worse of for this. The Greeks had a God of Thieves, named Hermes, whom Autolycus worshipped, and people thought more good of his cunning tricks than harm of his dishonesty. Perhaps these tricks of his were only practised for amusement; however that may be, Ulysses became as artful as his grandfather; he was both the bravest and the most cunning of men, but Ulysses never stole things, except once, as we shall hear, from the enemy in time of war. He showed his cunning in stratagems of war, and in many strange escapes from giants and man-eaters.

Soon after Ulysses was born, his grandfather came to see his mother and father in Ithaca. He was sitting at supper when the nurse of Ulysses, whose name was Eurycleia, brought in the baby, and set him on the knees of Autolycus, saying, ‘Find a name for your grandson, for he is a child of many prayers.’

‘I am very angry with many men and women in the world,’ said Autolycus, ‘so let the child’s name be A Man of Wrath,’ which, in Greek, was Odysseus. So the child was called Odysseus by his own people, but the name was changed into Ulysses, and we shall call him Ulysses.

We do not know much about Ulysses when he was a little boy, except that he used to run about the garden with his father, asking questions, and begging that he might have fruit trees ‘for his very own.’ He was a great pet, for his parents had no other son, so his father gave him thirteen pear trees, and forty fig trees, and promised him fifty rows of vines, all covered with grapes, which he could eat when he liked, without asking leave of the gardener. So he was not tempted to steal fruit, like his grandfather.

When Autolycus gave Ulysses his name, he said that he must come to stay with him, when he was a big boy, and he would get splendid presents. Ulysses was told about this, so, when he was a tall lad, he crossed the sea and drove in his chariot to the old man’s house on Mount Parnassus. Everybody welcomed him, and next day his uncles and cousins and he went out to hunt a fierce wild boar, early in the morning. Probably Ulysses took his own dog, named Argos, the best of hounds, of which we shall hear again, long afterwards, for the dog lived to be very old. Soon the hounds came on the scent of a wild boar, and after them the men went, with spears in their hands, and Ulysses ran foremost, for he was already the swiftest runner in Greece.