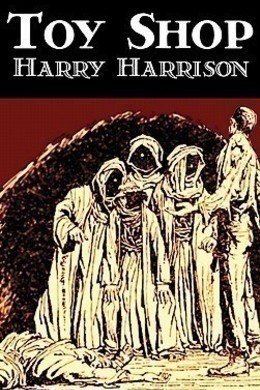 Harrison’s great science fiction short, The Toy Shop. The gadget was strictly, beyond any question, a toy. Not a real, workable device. Except for the way it could work under a man’s mental skin.

Because there were few adults in the crowd, and Colonel “Biff” Hawton stood over six feet tall, he could see every detail of the demonstration. The children–and most of the parents–gaped in wide-eyed wonder. Biff Hawton was too sophisticated to be awed. He stayed on because he wanted to find out what the trick was that made the gadget work.

“It’s all explained right here in your instruction book,” the demonstrator said, holding up a garishly printed booklet opened to a four-color diagram. “You all know how magnets pick up things and I bet you even know that the earth itself is one great big magnet–that’s why compasses always point north. Well … the Atomic Wonder Space Wave Tapper hangs onto those space waves. Invisibly all about us, and even going right through us, are the magnetic waves of the earth. The Atomic Wonder rides these waves just the way a ship rides the waves in the ocean. Now watch….”

Every eye was on him as he put the gaudy model rocketship on top of the table and stepped back. It was made of stamped metal and seemed as incapable of flying as a can of ham–which it very much resembled. Neither wings, propellors, nor jets broke through the painted surface. It rested on three rubber wheels and coming out through the bottom was a double strand of thin insulated wire. This white wire ran across the top of the black table and terminated in a control box in the demonstrator’s hand. An indicator light, a switch and a knob appeared to be the only controls.

“I turn on the Power Switch, sending a surge of current to the Wave Receptors,” he said. The switch clicked and the light blinked on and off with a steady pulse. Then the man began to slowly turn the knob. “A careful touch on the Wave Generator is necessary as we are dealing with the powers of the whole world here….”

A concerted ahhhh swept through the crowd as the Space Wave Tapper shivered a bit, then rose slowly into the air. The demonstrator stepped back and the toy rose higher and higher, bobbing gently on the invisible waves of magnetic force that supported it. Ever so slowly the power was reduced and it settled back to the table.

“Only $17.95,” the young man said, putting a large price sign on the table. “For the complete set of the Atomic Wonder, the Space Tapper control box, battery and instruction book … “

At the appearance of the price card the crowd broke up noisily and the children rushed away towards the operating model trains. The demonstrator’s words were lost in their noisy passage, and after a moment he sank into a gloomy silence. He put the control box down, yawned and sat on the edge of the table. Colonel Hawton was the only one left after the crowd had moved on.

“Could you tell me how this thing works?” the colonel asked, coming forward. The demonstrator brightened up and picked up one of the toys.

“Well, if you will look here, sir….” He opened the hinged top. “You will see the Space Wave coils at each end of the ship.” With a pencil he pointed out the odd shaped plastic forms about an inch in diameter that had been wound–apparently at random–with a few turns of copper wire. Except for these coils the interior of the model was empty. The coils were wired together and other wires ran out through the hole in the bottom of the control box. Biff Hawton turned a very quizzical eye on the gadget and upon the demonstrator who completely ignored this sign of disbelief.