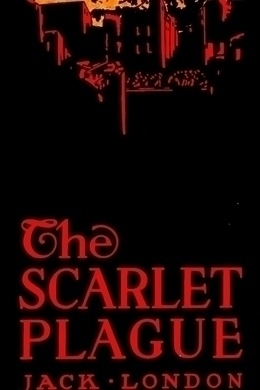 The year is 2073. It’s been sixty years since The Red Death wiped out most of humanity. James Howard Smith is one of the last survivors of the pre-plague era, but he knows he’s dying. He must instill values and wisdom to his grandsons, or humanity might not make it. A post apocalypse story as only Jack London could imagine it.

The way led along upon what had once been the embankment of a railroad. But no train had run upon it for many years. The forest on either side swelled up the slopes of the embankment and crested across it in a green wave of trees and bushes. The trail was as narrow as a man’s body, and was no more than a wild-animal runway. Occasionally, a piece of rusty iron, showing through the forest-mould, advertised that the rail and the ties still remained. In one place, a ten-inch tree, bursting through at a connection, had lifted the end of a rail clearly into view. The tie had evidently followed the rail, held to it by the spike long enough for its bed to be filled with gravel and rotten leaves, so that now the crumbling, rotten timber thrust itself up at a curious slant. Old as the road was, it was manifest that it had been of the mono-rail type.

An old man and a boy travelled along this runway. They moved slowly, for the old man was very old, a touch of palsy made his movements tremulous, and he leaned heavily upon his staff. A rude skull-cap of goat-skin protected his head from the sun. From beneath this fell a scant fringe of stained and dirty-white hair. A visor, ingeniously made from a large leaf, shielded his eyes, and from under this he peered at the way of his feet on the trail. His beard, which should have been snow-white but which showed the same weather-wear and camp-stain as his hair, fell nearly to his waist in a great tangled mass. About his chest and shoulders hung a single, mangy garment of goat-skin. His arms and legs, withered and skinny, betokened extreme age, as well as did their sunburn and scars and scratches betoken long years of exposure to the elements.

The boy, who led the way, checking the eagerness of his muscles to the slow progress of the elder, likewise wore a single garment–a ragged-edged piece of bear-skin, with a hole in the middle through which he had thrust his head. He could not have been more than twelve years old. Tucked coquettishly over one ear was the freshly severed tail of a pig. In one hand he carried a medium-sized bow and an arrow.

On his back was a quiverful of arrows. From a sheath hanging about his neck on a thong, projected the battered handle of a hunting knife. He was as brown as a berry, and walked softly, with almost a catlike tread. In marked contrast with his sunburned skin were his eyes–blue, deep blue, but keen and sharp as a pair of gimlets. They seemed to bore into aft about him in a way that was habitual. As he went along he smelled things, as well, his distended, quivering nostrils carrying to his brain an endless series of messages from the outside world. Also, his hearing was acute, and had been so trained that it operated automatically. Without conscious effort, he heard all the slight sounds in the apparent quiet–heard, and differentiated, and classified these sounds–whether they were of the wind rustling the leaves, of the humming of bees and gnats, of the distant rumble of the sea that drifted to him only in lulls, or of the gopher, just under his foot, shoving a pouchful of earth into the entrance of his hole.

Suddenly he became alertly tense. Sound, sight, and odor had given him a simultaneous warning. His hand went back to the old man, touching him, and the pair stood still. Ahead, at one side of the top of the embankment, arose a crackling sound, and the boy’s gaze was fixed on the tops of the agitated bushes. Then a large bear, a grizzly, crashed into view, and likewise stopped abruptly, at sight of the humans. He did not like them, and growled querulously. Slowly the boy fitted the arrow to the bow, and slowly he pulled the bowstring taut. But he never removed his eyes from the bear.

The old man peered from under his green leaf at the danger, and stood as quietly as the boy. For a few seconds this mutual scrutinizing went on; then, the bear betraying a growing irritability, the boy, with a movement of his head, indicated that the old man must step aside from the trail and go down the embankment. The boy followed, going backward, still holding the bow taut and ready. They waited till a crashing among the bushes from the opposite side of the embankment told them the bear had gone on. The boy grinned as he led back to the trail.

The old man shook his head.

“They get thicker every day,” he complained in a thin, undependable falsetto. “Who’d have thought I’d live to see the time when a man would be afraid of his life on the way to the Cliff House. When I was a boy, Edwin, men and women and little babies used to come out here from San Francisco by tens of thousands on a nice day. And there weren’t any bears then. No, sir. They used to pay money to look at them in cages, they were that rare.”