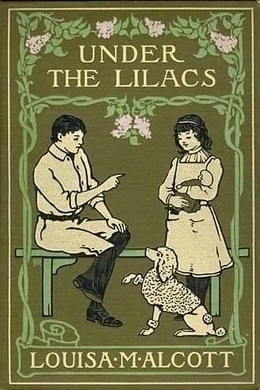 Under the Lilacs is a children fiction novel about two girls (Bab and Betty Moss), Miss Celia, a circus runaway (Ben Brown) and his dog (Sancho). When two young girls decide to have a tea party with their dolls and a mysterious dog comes and eats their prized cake, they end up finding a circus run-away in their play barn, Ben Brown. Ben is a horse master, and loves horses, so when the Moss’ take the young boy in they decide to give him work at the neighbors house driving cows (on a horse, of course). After that a series of events happens, and Ben experiences a profound tragedy in his life. Miss Celia, a neighbor, feels sorry and comforts him, and finally offers to let Ben stay with her and her fourteen-year-old brother, Thornton who is called Thorny. After that may adventures and summer-happenings go on in Celia’s house. Sancho gets lost, Ben is accused of stealing, Miss Celia even gets hurt and Ben takes a wild ride on her horse, Lita. You won’t be disappointed by the many curious exploits of the interesting characters in this classic.

The elm-tree avenue was all overgrown, the great gate was never unlocked, and the old house had been shut up for several years.

Yet voices were heard about the place, the lilacs nodded over the high wall as if they said, “We could tell fine secrets if we chose,” and the mullein outside the gate made haste to reach the keyhole, that it might peep in and see what was going on. If it had suddenly grown up like a magic bean-stalk, and looked in on a certain June day, it would have seen a droll but pleasant sight, for somebody evidently was going to have a party.

From the gate to the porch went a wide walk, paved with smooth slabs of dark stone, and bordered with the tall bushes which met overhead, making a green roof. All sorts of neglected flowers and wild weeds grew between their stems, covering the walls of this summer parlor with the prettiest tapestry. A board, propped on two blocks of wood, stood in the middle of the walk, covered with a little plaid shawl much the worse for wear, and on it a miniature tea-service was set forth with great elegance. To be sure, the tea-pot had lost its spout, the cream-jug its handle, the sugar-bowl its cover, and the cups and plates were all more or less cracked or nicked; but polite persons would not take notice of these trifling deficiencies, and none but polite persons were invited to this party.

On either side of the porch was a seat, and here a somewhat remarkable sight would have been revealed to any inquisitive eye peering through the aforesaid keyhole. Upon the left-hand seat lay seven dolls, upon the right-hand seat lay six; and so varied were the expressions of their countenances, owing to fractures, dirt, age, and other afflictions, that one would very naturally have thought this a doll’s hospital, and these the patients waiting for their tea.

This, however, would have been a sad mistake; for if the wind had lifted the coverings laid over them, it would have disclosed the fact that all were in full dress, and merely reposing before the feast should begin.

There was another interesting feature of the scene which would have puzzled any but those well acquainted with the manners and customs of dolls. A fourteenth rag baby, with a china head, hung by her neck from the rusty knocker in the middle of the door. A sprig of white and one of purple lilac nodded over her, a dress of yellow calico, richly trimmed with red-flannel scallops, shrouded her slender form, a garland of small flowers crowned her glossy curls, and a pair of blue boots touched toes in the friendliest, if not the most graceful, manner. An emotion of grief, as well as of surprise, might well have thrilled any youthful breast at such a spectacle; for why, oh! why, was this resplendent dolly hung up there to be stared at by thirteen of her kindred? Was she a criminal, the sight of whose execution threw them flat upon their backs in speechless horror? Or was she an idol, to be adored in that humble posture? Neither, my friends. She was blonde Belinda, set, or rather hung, aloft, in the place of honor, for this was her seventh birthday, and a superb ball was about to celebrate the great event. All were evidently awaiting a summons to the festive board; but such was the perfect breeding of these dolls, that not a single eye out of the whole twenty-seven (Dutch Hans had lost one of the black beads from his worsted countenance) turned for a moment toward the table, or so much as winked, as they lay in decorous rows, gazing with mute admiration at Belinda. She, unable to repress the joy and pride which swelled her sawdust bosom till the seams gaped, gave an occasional bounce as the wind waved her yellow skirts, or made the blue boots dance a sort of jig upon the door. Hanging was evidently not a painful operation, for she smiled contentedly, and looked as if the red ribbon around her neck was not uncomfortably tight; therefore, if slow suffocation suited her, who else had any right to complain? So a pleasing silence reigned, not even broken by a snore from Dinah, the top of whose turban alone was visible above the coverlet, or a cry from baby Jane, though her bare feet stuck out in a way that would have produced shrieks from a less well-trained infant.

Presently voices were heard approaching, and through the arch which led to a side-path came two little girls, one carrying a small pitcher, the other proudly bearing a basket covered with a napkin. They looked like twins, but were not, for Bab was a year older than Betty, though only an inch taller. Both had on brown calico frocks, much the worse for a week’s wear; but clean pink pinafores, in honor of the occasion, made up for that, as well as the gray stockings and thick boots. Both had round, rosy faces rather sunburnt, pug noses somewhat freckled, merry blue eyes, and braided tails of hair hanging down their backs like those of the dear little Kenwigses.