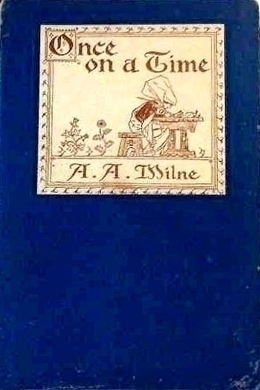 Once on a Time

“This is an odd book” or so states the author in 1917 for his first introduction. A fairytale with seven league boots, a princess, an enchantment, and the Countess Belvane. As Milne wrote in a later introduction: “But, as you see, I am still finding it difficult to explain just what sort of book it is. Perhaps no explanation is necessary. Read in it what you like; read it to whomever you like; be of what age you like; it can only fall into one of the two classes. Either you will enjoy it, or you won’t. It is that sort of book.”

King Merriwig of Euralia sat at breakfast on his castle walls. He lifted the gold cover from the gold dish in front of him, selected a trout and conveyed it carefully to his gold plate. He was a man of simple tastes, but when you have an aunt with the newly acquired gift of turning anything she touches to gold, you must let her practise sometimes. In another age it might have been fretwork.

“Ah,” said the King, “here you are, my dear.” He searched for his napkin, but the Princess had already kissed him lightly on the top of the head, and was sitting in her place opposite to him.

“Any adventures?” asked the King casually.

“Nothing, except it’s a beautiful morning.”

“Ah, well, perhaps the country isn’t what it was. Now when I was a young man, you simply couldn’t go into the forest without an adventure of some sort. The extraordinary things one encountered! Witches, giants, dwarfs—-. It was there that I first met your mother,” he added thoughtfully.

“I wish I remembered my mother,” said Hyacinth.

The King coughed and looked at her a little nervously.

“Seventeen years ago she died, Hyacinth, when you were only six months old. I have been wondering lately whether I haven’t been a little remiss in leaving you motherless so long.”

The Princess looked puzzled. “But it wasn’t your fault, dear, that mother died.”

“Oh, no, no, I’m not saying that. As you know, a dragon carried her off and–well, there it was. But supposing”–he looked at her shyly–“I had married again.”

The Princess was startled.

The King peered into his flagon. “Well,” he said, “there are people.”

“If it had been somebody very nice,” said the Princess wistfully, “it might have been rather lovely.”

The King gazed earnestly at the outside of his flagon.

The Princess was still puzzled. “But I’m grown up,” she said; “I don’t want a mother so much now.”

The King turned his flagon round and studied the other side of it.

“A mother’s–er–tender hand,” he said, “is–er–never—-“ and then the outrageous thing happened.

It was all because of a birthday present to the King of Barodia, and the present was nothing less than a pair of seven-league boots. The King being a busy man, it was a week or more before he had an opportunity of trying those boots. Meanwhile he used to talk about them at meals, and he would polish them up every night before he went to bed. When the great day came for the first trial of them to be made, he took a patronising farewell of his wife and family, ignored the many eager noses pressed against the upper windows of the Palace, and sailed off. The motion, as perhaps you know, is a little disquieting at first, but one soon gets used to it. After that it is fascinating. He had gone some two thousand miles before he realised that there might be a difficulty about finding his way back. The difficulty proved at least as great as he had anticipated. For the rest of that day he toured backwards and forwards across the country; and it was by the merest accident that a very angry King shot in through an open pantry window in the early hours of the morning. He removed his boots and went softly to bed….

It was, of course, a lesson to him. He decided that in the future he must proceed by a recognised route, sailing lightly from landmark to landmark. Such a route his Geographers prepared for him–an early morning constitutional, of three hundred miles or so, to be taken ten times before breakfast. He gave himself a week in which to recover his nerve and then started out on the first of them.

Now the Kingdom of Euralia adjoined that of Barodia, but whereas Barodia was a flat country, Euralia was a land of hills. It was natural then that the Court Geographers, in search of landmarks, should have looked towards Euralia; and over Euralia accordingly, about the time when cottage and castle alike were breakfasting, the King of Barodia soared and dipped and soared and dipped again.

“A mother’s tender hand,” said the King of Euralia, “is–er–never–good gracious! What’s that?”

There was a sudden rush of air; something came for a moment between his Majesty and the sun; and then all was quiet again.

“What was it?” asked Hyacinth, slightly alarmed.

“Most extraordinary,” said the King. “It left in my mind an impression of ginger whiskers and large boots. Do we know anybody like that?”

“The King of Barodia,” said Hyacinth, “has red whiskers, but I don’t know about his boots.”

“But what could he have been doing up there? Unless—-“