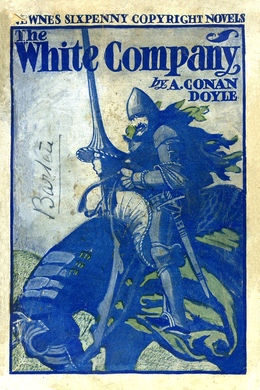 The story is set in England, France, and Spain, in the years during the Hundred Years’ War (1366/67), against the background of the campaign of Edward, the Black Prince to restore Peter of Castile to the throne of the Kingdom of Castile. The climax of the book occurs before the Battle of Nájera. Doyle became inspired to write the novel after attending a lecture on the Middle Ages. The novel is relatively unknown today, though it was very popular up through the Second World War. In fact, Doyle himself regarded this and his other historical novels more highly than the Sherlock Holmes adventures for which he is mainly remembered. The White Company of the title is a free company of archers, led by one of the main characters. The name is taken from a real-life 14th-Century Italian mercenary company, led by John Hawkwood.

The great bell of Beaulieu was ringing. Far away through the forest might be heard its musical clangor and swell. Peat-cutters on Blackdown and fishers upon the Exe heard the distant throbbing rising and falling upon the sultry summer air. It was a common sound in those parts–as common as the chatter of the jays and the booming of the bittern. Yet the fishers and the peasants raised their heads and looked questions at each other, for the angelus had already gone and vespers was still far off. Why should the great bell of Beaulieu toll when the shadows were neither short nor long?

All round the Abbey the monks were trooping in. Under the long green-paved avenues of gnarled oaks and of lichened beeches the white-robed brothers gathered to the sound. From the vine-yard and the vine-press, from the bouvary or ox-farm, from the marl-pits and salterns, even from the distant iron-works of Sowley and the outlying grange of St. Leonard’s, they had all turned their steps homewards. It had been no sudden call. A swift messenger had the night before sped round to the outlying dependencies of the Abbey, and had left the summons for every monk to be back in the cloisters by the third hour after noontide. So urgent a message had not been issued within the memory of old lay-brother Athanasius, who had cleaned the Abbey knocker since the year after the Battle of Bannockburn.

A stranger who knew nothing either of the Abbey or of its immense resources might have gathered from the appearance of the brothers some conception of the varied duties which they were called upon to perform, and of the busy, wide-spread life which centred in the old monastery. As they swept gravely in by twos and by threes, with bended heads and muttering lips there were few who did not bear upon them some signs of their daily toil. Here were two with wrists and sleeves all spotted with the ruddy grape juice. There again was a bearded brother with a broad-headed axe and a bundle of faggots upon his shoulders, while beside him walked another with the shears under his arm and the white wool still clinging to his whiter gown. A long, straggling troop bore spades and mattocks while the two rearmost of all staggered along under a huge basket o’ fresh-caught carp, for the morrow was Friday, and there were fifty platters to be filled and as many sturdy trenchermen behind them. Of all the throng there was scarce one who was not labor-stained and weary, for Abbot Berghersh was a hard man to himself and to others.

Meanwhile, in the broad and lofty chamber set apart for occasions of import, the Abbot himself was pacing impatiently backwards and forwards, with his long white nervous hands clasped in front of him. His thin, thought-worn features and sunken, haggard cheeks bespoke one who had indeed beaten down that inner foe whom every man must face, but had none the less suffered sorely in the contest. In crushing his passions he had well-nigh crushed himself. Yet, frail as was his person there gleamed out ever and anon from under his drooping brows a flash of fierce energy, which recalled to men’s minds that he came of a fighting stock, and that even now his twin-brother, Sir Bartholomew Berghersh, was one of the most famous of those stern warriors who had planted the Cross of St. George before the gates of Paris. With lips compressed and clouded brow, he strode up and down the oaken floor, the very genius and impersonation of asceticism, while the great bell still thundered and clanged above his head. At last the uproar died away in three last, measured throbs, and ere their echo had ceased the Abbot struck a small gong which summoned a lay-brother to his presence.

“Have the brethren come?” he asked, in the Anglo-French dialect used in religious houses.

“They are here,” the other answered, with his eyes cast down and his hands crossed upon his chest.

“Two and thirty of the seniors and fifteen of the novices, most holy father. Brother Mark of the Spicarium is sore smitten with a fever and could not come. He said that–”

“It boots not what he said. Fever or no, he should have come at my call. His spirit must be chastened, as must that of many more in this Abbey. You yourself, brother Francis, have twice raised your voice, so it hath come to my ears, when the reader in the refectory hath been dealing with the lives of God’s most blessed saints. What hast thou to say?”

The lay-brother stood meek and silent, with his arms still crossed in front of him.

“One thousand Aves and as many Credos, said standing with arms outstretched before the shrine of the Virgin, may help thee to remember that the Creator hath given us two ears and but one mouth, as a token that there is twice the work for the one as for the other. Where is the master of the novices?”

“He is without, most holy father.”