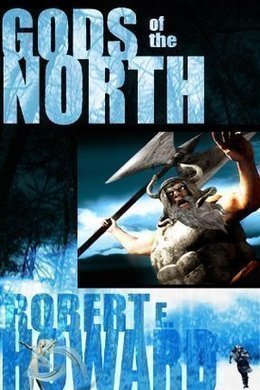 The Coming of Conan #1: Gods of the North

The Frost-Giant’s Daughter is one of the original short stories about Conan the Cimmerian, written by American author Robert E. Howard, but not published in his lifetime. It is set in the pseudo-historical Hyborian Age and details Conan pursuing a spectral nymph across the frozen snows of Nordheim. Rejected as a Conan story by Weird Tales magazine editor Farnsworth Wright, Howard changed the main character’s name to “Amra of Akbitana” and retitled the piece as The Gods of the North.

The clangor of the swords had died away, the shouting of the slaughter was hushed; silence lay on the red-stained snow. The pale bleak sun that glittered so blindingly from the ice-fields and the snow-covered plains struck sheens of silver from rent corselet and broken blade, where the dead lay in heaps. The nerveless hand yet gripped the broken hilt: helmeted heads, back-drawn in the death throes, tilted red beards and golden beards grimly upward, as if in last invocation to Ymir the frost-giant.

Across the red drifts and mail-clad forms, two figures approached one another. In that utter desolation only they moved. The frosty sky was over them, the white illimitable plain around them, the dead men at their feet. Slowly through the corpses they came, as ghosts might come to a tryst through the shambles of a world.

Their shields were gone, their corselets dinted. Blood smeared their mail; their swords were red. Their horned helmets showed the marks of fierce strokes.

One spoke, he whose locks and beard were red as the blood on the sunlit snow.

“Man of the raven locks,” said he, “tell me your name, so that my brothers in Vanaheim may know who was the last of Wulfhere’s band to fall before the sword of Heimdul.”

“This is my answer,” replied the black-haired warrior: “Not in Vanaheim, but in Valhalla will you tell your brothers the name of Amra of Akbitana.”

Heimdul roared and sprang, and his sword swung in a mighty arc. Amra staggered and his vision was filled with red sparks as the blade shivered into bits of blue fire on his helmet. But as he reeled he thrust with all the power of his great shoulders. The sharp point drove through brass scales and bones and heart, and the red-haired warrior died at Amra’s feet.

Amra stood swaying, trailing his sword, a sudden sick weariness assailing him. The glare of the sun on the snow cut his eyes like a knife and the sky seemed shrunken and strangely far. He turned away from the trampled expanse where yellow-bearded warriors lay locked with red-haired slayers in the embrace of death. A few steps he took, and the glare of the snow fields was suddenly dimmed. A rushing wave of blindness engulfed him, and he sank down into the snow, supporting himself on one mailed arm, seeking to shake the blindness out of his eyes as a lion might shake his mane.

A silvery laugh cut through his dizziness, and his sight cleared slowly. There was a strangeness about all the landscape that he could not place or define–an unfamiliar tinge to earth and sky. But he did not think long of this. Before him, swaying like a sapling in the wind, stood a woman. Her body was like ivory, and save for a veil of gossamer, she was naked as the day. Her slender bare feet were whiter than the snow they spurned. She laughed, and her laughter was sweeter than the rippling of silvery fountains, and poisonous with cruel mockery.

“Who are you?” demanded the warrior.

“What matter?” Her voice was more musical than a silver-stringed harp, but it was edged with cruelty.

“Call up your men,” he growled, grasping his sword. “Though my strength fail me, yet they shall not take me alive. I see that you are of the Vanir.”

He looked again at her unruly locks, which he had thought to be red. Now he saw that they were neither red nor yellow, but a glorious compound of both colors. He gazed spell-bound. Her hair was like elfin-gold, striking which, the sun dazzled him. Her eyes were neither wholly blue nor wholly grey, but of shifting colors and dancing lights and clouds of colors he could not recognize. Her full red lips smiled, and from her slim feet to the blinding crown of her billowy hair, her ivory body was as perfect as the dream of a god. Amra’s pulse hammered in his temples.

“I can not tell,” said he, “whether you are of Vanaheim and mine enemy, or of Asgard and my friend. Far have I wandered, from Zingara to the Sea of Vilayet, in Stygia and Kush, and the country of the Hyrkanians; but a woman like you I have never seen. Your locks blind me with their brightness. Not even among the fairest daughters of the Aesir have I seen such hair, by Ymir!”

“Who are you to swear by Ymir?” she mocked. “What know you of the gods of ice and snow, you who have come up from the south to adventure among strangers?”

“By the dark gods of my own race!” he cried in anger. “Have I been backward in the sword-play, stranger or no? This day I have seen four score warriors fall, and I alone survive the field where Mulfhere’s reavers met the men of Bragi. Tell me, woman, have you caught the flash of mail across the snow-plains, or seen armed men moving upon the ice?”

“I have seen the hoar-frost glittering in the sun,” she answered. “I have heard the wind whispering across the everlasting snows.”

He shook his head.