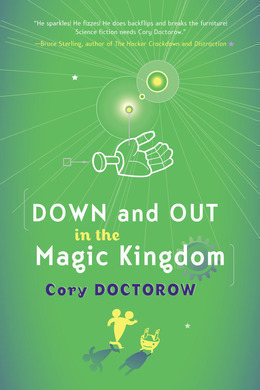 Down and Out in the Magic Kingdom

Jules is a young man barely a century old. He’s lived long enough to see the cure for death and the end of scarcity, to learn ten languages and compose three symphonies…and to realize his boyhood dream of taking up residence in Disney World. Disney World! The greatest artistic achievement of the long-ago twentieth century. Now in the care of a network of volunteer ‘ad-hocs’ who keep the classic attractions running as they always have, enhanced with only the smallest high-tech touches. Now, though, it seems the ‘ad-hocs’ are under attack. A new group has taken over the Hall of the Presidents and is replacing its venerable audioanimatronics with new, immersive direct-to-brain interfaces that give guests the illusion of being Washington, Lincoln, and all the others. For Jules, this is an attack on the artistic purity of Disney World itself. Worse: it appears this new group has had Jules killed. This upsets him. (It’s only his fourth death and revival, after all.) Now it’s war: war for the soul of the Magic Kingdom, a war of ever-shifting reputations, technical wizardry, and entirely unpredictable outcomes. Bursting with cutting-edge speculation and human insight, Down and Out in the Magic Kingdom reads like Neal Stephenson meets Nick Hornby: a coming-of-age romantic comedy and a kick-butt cybernetic tour de force.

My girlfriend was 15 percent of my age, and I was old-fashioned enough that it bugged me. Her name was Lil, and she was second-generation Disney World, her parents being among the original ad-hocracy that took over the management of Liberty Square and Tom Sawyer Island. She was, quite literally, raised in Walt Disney World and it showed.

It showed. She was neat and efficient in her every little thing, from her shining red hair to her careful accounting of each gear and cog in the animatronics that were in her charge. Her folks were in canopic jars in Kissimmee, deadheading for a few centuries.

On a muggy Wednesday, we dangled our feet over the edge of the Liberty Belle’s riverboat pier, watching the listless Confederate flag over Fort Langhorn on Tom Sawyer Island by moonlight. The Magic Kingdom was all closed up and every last guest had been chased out the gate underneath the Main Street train station, and we were able to breathe a heavy sigh of relief, shuck parts of our costumes, and relax together while the cicadas sang.

I was more than a century old, but there was still a kind of magic in having my arm around the warm, fine shoulders of a girl by moonlight, hidden from the hustle of the cleaning teams by the turnstiles, breathing the warm, moist air. Lil plumped her head against my shoulder and gave me a butterfly kiss under my jaw.

“Her name was McGill,” I sang, gently.

“But she called herself Lil,” she sang, warm breath on my collarbones.

“And everyone knew her as Nancy,” I sang.

I’d been startled to know that she knew the Beatles. They’d been old news in my youth, after all. But her parents had given her a thorough – if eclectic – education.

“Want to do a walk-through?” she asked. It was one of her favorite duties, exploring every inch of the rides in her care with the lights on, after the horde of tourists had gone. We both liked to see the underpinnings of the magic. Maybe that was why I kept picking at the relationship.

“I’m a little pooped. Let’s sit a while longer, if you don’t mind.”

She heaved a dramatic sigh. “Oh, all right. Old man.” She reached up and gently tweaked my nipple, and I gave a satisfying little jump. I think the age difference bothered her, too, though she teased me for letting it get to me.

“I think I’ll be able to manage a totter through the Haunted Mansion, if you just give me a moment to rest my bursitis.” I felt her smile against my shirt. She loved the Mansion; loved to turn on the ballroom ghosts and dance their waltz with them on the dusty floor, loved to try and stare down the marble busts in the library that followed your gaze as you passed.

I liked it too, but I really liked just sitting there with her, watching the water and the trees. I was just getting ready to go when I heard a soft ping inside my cochlea. “Damn,” I said. “I’ve got a call.”

“Tell them you’re busy,” she said.

“I will,” I said, and answered the call subvocally. “Julius here.”

I knew a thousand Dans, but I recognized the voice immediately, though it’d been ten years since we last got drunk at the Gazoo together. I muted the subvocal and said, “Lil, I’ve got to take this. Do you mind?”

“Oh, no, not at all,” she sarcased at me. She sat up and pulled out her crack pipe and lit up.

“Yeah, buddy, it sure has been,” he said, and his voice cracked on a sob.

I turned and gave Lil such a look, she dropped her pipe. “How can I help?” she said, softly but swiftly. I waved her off and switched the phone to full-vocal mode. My voice sounded unnaturally loud in the cricket-punctuated calm.

“Down here, in Orlando. I’m stuck out on Pleasure Island.”

“All right,” I said. “Meet me at, uh, the Adventurer’s Club, upstairs on the couch by the door. I’ll be there in –” I shot a look at Lil, who knew the castmember-only roads better than I. She flashed ten fingers at me. “Ten minutes.”

“Okay,” he said. “Sorry.” He had his voice back under control. I switched off.

“I’m not sure. An old friend is in town. He sounds like he’s got a problem.”

Lil pointed a finger at me and made a trigger-squeezing gesture. “There,” she said. “I’ve just dumped the best route to Pleasure Island to your public directory. Keep me in the loop, okay?”

I set off for the utilidor entrance near the Hall of Presidents and booted down the stairs to the hum of the underground tunnel-system. I took the slidewalk to cast parking and zipped my little cart out to Pleasure Island.