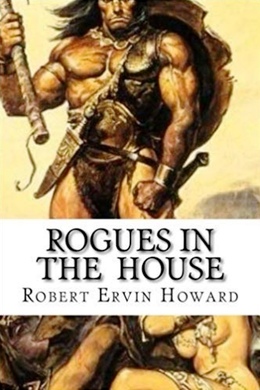 Rogues in the House

One of the original short stories starring the fictional sword and sorcery hero Conan the Cimmerian, written by American author Robert E. Howard and first published in Weird Tales magazine January 1934. Set in the pseudo-historical Hyborian Age and concerns Conan inadvertently becoming involved in the power play between two powerful men fighting for control of a city. It was the seventh Conan story Howard had published.

At a court festival, Nabonidus, the Red Priest, who was the real ruler of the city, touched Murilo, the young aristocrat, courteously on the arm. Murilo turned to meet the priest’s enigmatic gaze, and to wonder at the hidden meaning therein. No words passed between them, but Nabonidus bowed and handed Murilo a small gold cask. The young nobleman, knowing that Nabonidus did nothing without reason, excused himself at the first opportunity and returned hastily to his chamber. There he opened the cask and found within a human ear, which he recognized by a peculiar scar upon it. He broke into a profuse sweat and was no longer in doubt about the meaning in the Red Priest’s glance.

But Murilo, for all his scented black curls and foppish apparel was no weakling to bend his neck to the knife without a struggle. He did not know whether Nabonidus was merely playing with him or giving him a chance to go into voluntary exile, but the fact that he was still alive and at liberty proved that he was to be given at least a few hours, probably for meditation. However, he needed no meditation for decision; what he needed was a tool. And Fate furnished that tool, working among the dives and brothels of the squalid quarters even while the young nobleman shivered and pondered in the part of the city occupied by the purple-towered marble and ivory palaces of the aristocracy.

There was a priest of Anu whose temple, rising at the fringe of the slum district, was the scene of more than devotions. The priest was fat and full-fed, and he was at once a fence for stolen articles and a spy for the police. He worked a thriving trade both ways, because the district on which he bordered was the Maze, a tangle of muddy, winding alleys and sordid dens, frequented by the bolder thieves in the kingdom. Daring above all were a Gunderman deserter from the mercenaries and a barbaric Cimmerian. Because of the priest of Anu, the Gunderman was taken and hanged in the market square. But the Cimmerian fled, and learning in devious ways of the priest’s treachery, he entered the temple of Anu by night and cut off the priest’s head. There followed a great turmoil in the city, but the search for the killer proved fruitless until a woman betrayed him to the authorities and led a captain of the guard and his squad to the hidden chamber where the barbarian lay drunk.

Waking to stupefied but ferocious life when they seized him, he disemboweled the captain, burst through his assailants, and would have escaped but for the liquor that still clouded his senses. Bewildered and half blinded, he missed the open door in his headlong flight and dashed his head against the stone wall so terrifically that he knocked himself senseless. When he came to, he was in the strongest dungeon in the city, shackled to the wall with chains not even his barbaric thews could break.

To this cell came Murilo, masked and wrapped in a wide black cloak. The Cimmerian surveyed him with interest, thinking him the executioner sent to dispatch him. Murilo set him at rights and regarded him with no less interest. Even in the dim light of the dungeon, with his limbs loaded with chains, the primitive power of the man was evident. His mighty body and thick-muscled limbs combined the strength of a grizzly with the quickness of a panther. Under his tangled black mane his blue eyes blazed with unquenchable savagery.

“Would you like to live?” asked Murilo. The barbarian grunted, new interest glinting in his eyes.

“If I arrange for your escape, will you do a favor for me?” the aristocrat asked.

The Cimmerian did not speak, but the intentness of his gaze answered for him.

Murilo’s voice sank to a whisper. “Nabonidus, the king’s priest!”

The Cimmerian showed no sign of surprise or perturbation. He had none of the fear or reverence for authority that civilization instills in men. King or beggar, it was all one to him. Nor did he ask why Murilo had come to him, when the quarters were full of cutthroats outside prisons.

“When am I to escape?” he demanded.

“Within the hour. There is but one guard in this part of the dungeon at night. He can be bribed; he has been bribed. See, here are the keys to your chains. I’ll remove them and, after I have been gone an hour, the guard, Athicus, will unlock the door to your cell. You will bind him with strips torn from your tunic; so when he is found, the authorities will think you were rescued from the outside and will not suspect him. Go at once to the house of the Red Priest and kill him. Then go to the Rats’ Den, where a man will meet you and give you a pouch of gold and a horse. With those you can escape from the city and flee the country.”

“Take off these cursed chains now,” demanded the Cimmerian. “And have the guard bring me food. By Crom, I have lived on moldy bread and water for a whole day, and I am nigh to famishing.”