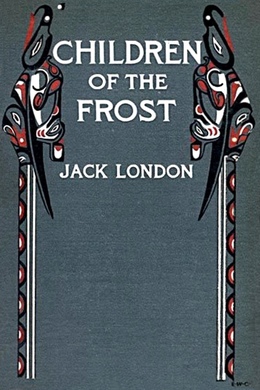 Children of the Frost

American journalist and action-adventure writer Jack London had a life-long fascination with the indigenous tribes of the Pacific Northwest, and he brings his extensive research and first-hand experience in the region to bear in the fiction he wrote about these communities.

A weary journey beyond the last scrub timber and straggling copses, into the heart of the Barrens where the niggard North is supposed to deny the Earth, are to be found great sweeps of forests and stretches of smiling land. But this the world is just beginning to know. The world’s explorers have known it, from time to time, but hitherto they have never returned to tell the world.

The Barrens–well, they are the Barrens, the bad lands of the Arctic, the deserts of the Circle, the bleak and bitter home of the musk-ox and the lean plains wolf. So Avery Van Brunt found them, treeless and cheerless, sparsely clothed with moss and lichens, and altogether uninviting. At least so he found them till he penetrated to the white blank spaces on the map, and came upon undreamed-of rich spruce forests and unrecorded Eskimo tribes. It had been his intention, (and his bid for fame), to break up these white blank spaces and diversify them with the black markings of mountain-chains, sinks and basins, and sinuous river courses; and it was with added delight that he came to speculate upon the possibilities of timber belts and native villages.

Avery Van Brunt, or, in full distinction, Professor A. Van Brunt of the Geological Survey, was second in command of the expedition, and first in command of the sub-expedition which he had led on a side tour of some half a thousand miles up one of the branches of the Thelon and which he was now leading into one of his unrecorded villages. At his back plodded eight men, two of them French-Canadian voyageurs, and the remainder strapping Crees from Manitoba-way. He, alone, was full-blooded Saxon, and his blood was pounding fiercely through his veins to the traditions of his race. Clive and Hastings, Drake and Raleigh, Hengest and Horsa, walked with him. First of all men of his breed was he to enter this lone Northland village, and at the thought an exultancy came upon him, an exaltation, and his followers noted that his leg-weariness fell from him and that he insensibly quickened the pace.

The village emptied itself, and a motley crowd trooped out to meet him, men in the forefront, with bows and spears clutched menacingly, and women and children faltering timidly in the rear. Van Brunt lifted his right arm and made the universal peace sign, a sign which all peoples know, and the villagers answered in peace. But to his chagrin, a skin-clad man ran forward and thrust out his hand with a familiar “Hello.” He was a bearded man, with cheeks and brow bronzed to copper-brown, and in him Van Brunt knew his kind.

“Who are you?” he asked, gripping the extended hand. “Andrée?”

“Who’s Andrée?” the man asked back.

Van Brunt looked at him more sharply. “By George, you’ve been here some time.”

“Five years,” the man answered, a dim flicker of pride in his eyes. “But come on, let’s talk.”

“Let them camp alongside of me,” he answered Van Brunt’s glance at his party. “Old Tantlatch will take care of them. Come on.”

He swung off in a long stride, Van Brunt following at his heels through the village. In irregular fashion, wherever the ground favored, the lodges of moose hide were pitched. Van Brunt ran his practised eye over them and calculated.

“Two hundred, not counting the young ones,” he summed up.

The man nodded. “Pretty close to it. But here’s where I live, out of the thick of it, you know–more privacy and all that. Sit down. I’ll eat with you when your men get something cooked up. I’ve forgotten what tea tastes like…. Five years and never a taste or smell…. Any tobacco?…Ah, thanks, and a pipe? Good. Now for a fire-stick and we’ll see if the weed has lost its cunning.”

He scratched the match with the painstaking care of the woodsman, cherished its young flame as though there were never another in all the world, and drew in the first mouthful of smoke. This he retained meditatively for a time, and blew out through his pursed lips slowly and caressingly. Then his face seemed to soften as he leaned back, and a soft blur to film his eyes. He sighed heavily, happily, with immeasurable content, and then said suddenly:

“God! But that tastes good!”

“Five years.” The man sighed again. “And you, I presume, wish to know about it, being naturally curious, and this a sufficiently strange situation, and all that. But it’s not much. I came in from Edmonton after musk-ox, and like Pike and the rest of them, had my mischances, only I lost my party and outfit. Starvation, hardship, the regular tale, you know, sole survivor and all that, till I crawled into Tantlatch’s, here, on hand and knee.”

“Five years,” Van Brunt murmured retrospectively, as though turning things over in his mind.

“Five years on February last. I crossed the Great Slave early in May–”

“And you are … Fairfax?” Van Brunt interjected.