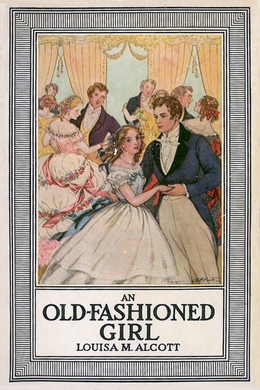 It all starts out with Tom Shaw fighting with his sister, Fan, to go to the station to pick up Fan’s friend. Fan does not wish to go because her curls will get ruined in the rain. Finally, Tom agrees to go, and runs to the station. There, he expects to meet a fashionable, breezy young lady, but is instead met by a young girl with a bright face, and simple clothes. Her name is Polly. This first book is about Polly having to deal with irritating Tom, who is sometimes nice and sometimes mean, her own simple country clothes being made fun of by Fan’s friends, and temptations that come her way.

“Oh, I ‘m not going; it ‘s too wet. Should n’t have a crimp left if I went out such a day as this; and I want to look nice when Polly comes.”

“You don’t expect me to go and bring home a strange girl alone, do you?” And Tom looked as much alarmed as if his sister had proposed to him to escort the wild woman of Australia.

“Well, I call that mean! I supposed I ‘d got to go; but you said you ‘d go, too. Catch me bothering about your friends another time! No, sir!” And Tom rose from the sofa with an air of indignant resolution, the impressive effect of which was somewhat damaged by a tousled head, and the hunched appearance of his garments generally.

“Now, don’t be cross; and I ‘ll get mamma to let you have that horrid Ned Miller, that you are so fond of, come and make you a visit after Polly ‘s gone,” said Fanny, hoping to soothe his ruffled feelings.

“How long is she going to stay?” demanded Tom, making his toilet by a promiscuous shake.

“She won’t stay long then, if I can help it,” muttered Tom, who regarded girls as a very unnecessary portion of creation. Boys of fourteen are apt to think so, and perhaps it is a wise arrangement; for, being fond of turning somersaults, they have an opportunity of indulging in a good one, metaphorically speaking, when, three or four years later, they become the abject slaves of “those bothering girls.”

“Look here! how am I going to know the creature? I never saw her, and she never saw me. You ‘ll have to come too, Fan,” he added, pausing on his way to the door, arrested by the awful idea that he might have to address several strange girls before he got the right one.

“You ‘ll find her easy enough; she ‘ll probably be standing round looking for us. I dare say she ‘ll know you, though I ‘m not there, because I ‘ve described you to her.”

“Guess she won’t, then;” and Tom gave a hasty smooth to his curly pate and a glance at the mirror, feeling sure that his sister had n’t done him justice. Sisters never do, as “we fellows” know too well.

“Do go along, or you ‘ll be too late; and then, what will Polly think of me?” cried Fanny, with the impatient poke which is peculiarly aggravating to masculine dignity.

“She ‘ll think you cared more about your frizzles than your friends, and she ‘ll be about right, too.”

Feeling that he said rather a neat and cutting thing, Tom sauntered leisurely away, perfectly conscious that it was late, but bent on not being hurried while in sight, though he ran himself off his legs to make up for it afterward.

“If I was the President, I ‘d make a law to shut up all boys till they were grown; for they certainly are the most provoking toads in the world,” said Fanny, as she watched the slouchy figure of her brother strolling down the street. She might have changed her mind, however, if she had followed him, for as soon as he turned the corner, his whole aspect altered; his hands came out of his pockets, he stopped whistling, buttoned his jacket, gave his cap a pull, and went off at a great pace.

The train was just in when he reached the station, panting like a race-horse, and as red as a lobster with the wind and the run.

“Suppose she ‘ll wear a top-knot and a thingumbob, like every one else; and however shall I know her? Too bad of Fan to make me come alone!” thought Tom, as he stood watching the crowd stream through the depot, and feeling rather daunted at the array of young ladies who passed. As none of them seemed looking for any one, he did not accost them, but eyed each new batch with the air of a martyr. “That ‘s her,” he said to himself, as he presently caught sight of a girl in gorgeous array, standing with her hands folded, and a very small hat perched on the top of a very large “chig-non,” as Tom pronounced it. “I suppose I ‘ve got to speak to her, so here goes;” and, nerving himself to the task, Tom slowly approached the damsel, who looked as if the wind had blown her clothes into rags, such a flapping of sashes, scallops, ruffles, curls, and feathers was there.

“I say, if you please, is your name Polly Milton?” meekly asked Tom, pausing before the breezy stranger.

“No, it is n’t,” answered the young lady, with a cool stare that utterly quenched him.

“Where in thunder is she?” growled Tom, walking off in high dudgeon. The quick tap of feet behind him made him turn in time to see a fresh-faced little girl running down the long station, and looking as if she rather liked it. As she smiled, and waved her bag at him, he stopped and waited for her, saying to himself, “Hullo! I wonder if that ‘s Polly?”

Up came the little girl, with her hand out, and a half-shy, half-merry look in her blue eyes, as she said, inquiringly, “This is Tom, is n’t it?”