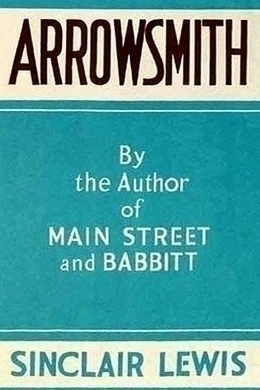 Small-town physician, Martin Arrowsmith, is a dedicated worker whose efforts lead him to a promising career in the medical research field. A breakthrough discovery in treating the plague promises wealth and power – but the death of his wife causes him to rethink his priorities. Arrowsmith is arguably the earliest major novel to deal with the culture of science. It was written in the period after the reforms of medical education flowing from the Flexner Report on Medical Education in the United States and Canada: A Report to the Carnegie Foundation for the Advancement of Teaching, 1910, which had called on medical schools in the United States to adhere to mainstream science in their teaching and research.

The driver of the wagon swaying through forest and swamp of the Ohio wilderness was a ragged girl of fourteen. Her mother they had buried near the Monongahela–the girl herself had heaped with torn sods the grave beside the river of the beautiful name. Her father lay shrinking with fever on the floor of the wagon-box, and about him played her brothers and sisters, dirty brats, tattered brats, hilarious brats.

She halted at the fork in the grassy road, and the sick man quavered, “Emmy, ye better turn down towards Cincinnati. If we could find your Uncle Ed, I guess he’d take us in.”

“Nobody ain’t going to take us in,” she said. “We’re going on jus’ long as we can. Going West! They’s a whole lot of new things I aim to be seeing!”

She cooked the supper, she put the children to bed, and sat by the fire, alone.

That was the great-grandmother of Martin Arrowsmith.

Cross-legged in the examining-chair in Doc Vickerson’s office, a boy was reading “Gray’s Anatomy.” His name was Martin Arrowsmith, of Elk Mills, in the state of Winnemac.

There was a suspicion in Elk Mills–now, in 1897, a dowdy red-brick village, smelling of apples–that this brown-leather adjustable seat which Doc Vickerson used for minor operations, for the infrequent pulling of teeth and for highly frequent naps, had begun life as a barber’s chair. There was also a belief that its proprietor must once have been called Doctor Vickerson, but for years he had been only The Doc, and he was scurfier and much less adjustable than the chair.

Martin was the son of J. J. Arrowsmith, who conducted the New York Clothing Bazaar. By sheer brass and obstinacy he had, at fourteen, become the unofficial, also decidedly unpaid, assistant to the Doc, and while the Doc was on a country call he took charge–though what there was to take charge of, no one could ever make out. He was a slender boy, not very tall; his hair and restless eyes were black, his skin unusually white, and the contrast gave him an air of passionate variability. The squareness of his head and a reasonable breadth of shoulders saved him from any appearance of effeminacy or of that querulous timidity which artistic young gentlemen call Sensitiveness. When he lifted his head to listen, his right eyebrow, slightly higher than the left, rose and quivered in his characteristic expression of energy, of independence, and a hint that he could fight, a look of impertinent inquiry which had been known to annoy his teachers and the Sunday School superintendent.

Martin was, like most inhabitants of Elk Mills before the Slavo- Italian immigration, a Typical Pure-bred Anglo-Saxon American, which means that he was a union of German, French, Scotch, Irish, perhaps a little Spanish, conceivably a little of the strains lumped together as “Jewish,” and a great deal of English, which is itself a combination of primitive Briton, Celt, Phoenician, Roman, German, Dane, and Swede.

It is not certain that, in attaching himself to Doc Vickerson, Martin was entirely and edifyingly controlled by a desire to become a Great Healer. He did awe his Gang by bandaging stone-bruises, dissecting squirrels, and explaining the astounding and secret matters to be discovered at the back of the physiology, but he was not completely free from an ambition to command such glory among them as was enjoyed by the son of the Episcopalian minister, who could smoke an entire cigar without becoming sick. Yet this afternoon he read steadily at the section on the lymphatic system, and he muttered the long and perfectly incomprehensible words in a hum which made drowsier the dusty room.

It was the central room of the three occupied by Doc Vickerson, facing on Main Street above the New York Clothing Bazaar. On one side of it was the foul waiting-room, on the other, the Doc’s bedroom. He was an aged widower; for what he called “female fixings” he cared nothing; and the bedroom with its tottering bureau and its cot of frowsy blankets was cleaned only by Martin, in not very frequent attacks of sanitation.

This central room was at once business office, consultation-room, operating-theater, living-room, poker den, and warehouse for guns and fishing tackle. Against a brown plaster wall was a cabinet of zoological collections and medical curiosities, and beside it the most dreadful and fascinating object known to the boy-world of Elk Mills–a skeleton with one gaunt gold tooth. On evenings when the Doc was away, Martin would acquire prestige among the trembling Gang by leading them into the unutterable darkness and scratching a sulfur match on the skeleton’s jaw.