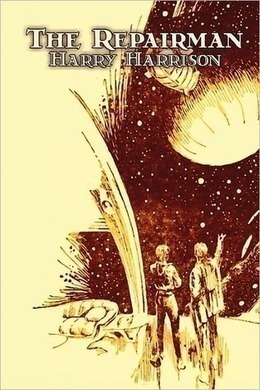 Take an intergalactic journey with science fiction luminary Harry Harrison. In The Repairman, Harrison recounts the travails of a lone skilled laborer who is charged with the frustrating task of making a crucial repair to malfunctioning equipment on a far-flung planet.

The Old Man had that look of intense glee on his face that meant someone was in for a very rough time. Since we were alone, it took no great feat of intelligence to figure it would be me. I talked first, bold attack being the best defense and so forth.

“I quit. Don’t bother telling me what dirty job you have cooked up, because I have already quit and you do not want to reveal company secrets to me.”

The grin was even wider now and he actually chortled as he thumbed a button on his console. A thick legal document slid out of the delivery slot onto his desk.

“This is your contract,” he said. “It tells how and when you will work. A steel-and-vanadium-bound contract that you couldn’t crack with a molecular disruptor.”

I leaned out quickly, grabbed it and threw it into the air with a single motion. Before it could fall, I had my Solar out and, with a wide-angle shot, burned the contract to ashes.

The Old Man pressed the button again and another contract slid out on his desk. If possible, the smile was still wider now.

“I should have said a duplicate of your contract–like this one here.” He made a quick note on his secretary plate. “I have deducted 13 credits from your salary for the cost of the duplicate–as well as a 100-credit fine for firing a Solar inside a building.”

I slumped, defeated, waiting for the blow to land. The Old Man fondled my contract.

“According to this document, you can’t quit. Ever. Therefore I have a little job I know you’ll enjoy. Repair job. The Centauri beacon has shut down. It’s a Mark III beacon….”

“What kind of beacon?” I asked him. I have repaired hyperspace beacons from one arm of the Galaxy to the other and was sure I had worked on every type or model made. But I had never heard of this kind.

“Mark III,” the Old Man repeated, practically chortling. “I never heard of it either until Records dug up the specs. They found them buried in the back of their oldest warehouse. This was the earliest type of beacon ever built–by Earth, no less. Considering its location on one of the Proxima Centauri planets, it might very well be the first beacon.”

I looked at the blueprints he handed me and felt my eyes glaze with horror. “It’s a monstrosity! It looks more like a distillery than a beacon–must be at least a few hundred meters high. I’m a repairman, not an archeologist. This pile of junk is over 2000 years old. Just forget about it and build a new one.”

The Old Man leaned over his desk, breathing into my face. “It would take a year to install a new beacon–besides being too expensive–and this relic is on one of the main routes. We have ships making fifteen-light-year detours now.”

He leaned back, wiped his hands on his handkerchief and gave me Lecture Forty-four on Company Duty and My Troubles.

“This department is officially called Maintenance and Repair, when it really should be called trouble-shooting. Hyperspace beacons are made to last forever–or damn close to it. When one of them breaks down, it is never an accident, and repairing the thing is never a matter of just plugging in a new part.”

He was telling me–the guy who did the job while he sat back on his fat paycheck in an air-conditioned office.

He rambled on. “How I wish that were all it took! I would have a fleet of parts ships and junior mechanics to install them. But its not like that at all. I have a fleet of expensive ships that are equipped to do almost anything–manned by a bunch of irresponsibles like you.”

I nodded moodily at his pointing finger.

“How I wish I could fire you all! Combination space-jockeys, mechanics, engineers, soldiers, con-men and anything else it takes to do the repairs. I have to browbeat, bribe, blackmail and bulldoze you thugs into doing a simple job. If you think you’re fed up, just think how I feel. But the ships must go through! The beacons must operate!”

I recognized this deathless line as the curtain speech and crawled to my feet. He threw the Mark III file at me and went back to scratching in his papers. Just as I reached the door, he looked up and impaled me on his finger again.

“And don’t get any fancy ideas about jumping your contract. We can attach that bank account of yours on Algol II long before you could draw the money out.”

I smiled, a little weakly, I’m afraid, as if I had never meant to keep that account a secret. His spies were getting more efficient every day. Walking down the hall, I tried to figure a way to transfer the money without his catching on–and knew at the same time he was figuring a way to outfigure me.

It was all very depressing, so I stopped for a drink, then went on to the spaceport.