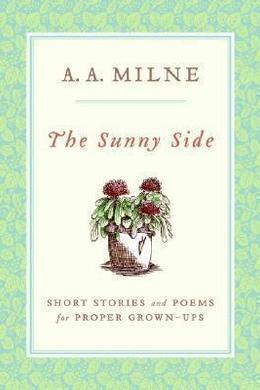 The Sunny Side gathers the best short works by the inimitable A. A. Milne. Written for the satire magazine Punch, these brief stories and essays perfectly capture Milne’s sly humor, beguiling social insight, and scathing wit. From Odd Verses to War Sketches, Summer Days to Men of Letters, Milne takes his readers from the stiff British drawing room to the irreverent joy of a boy’s day at the beach. Ideal for curling up with in the hammock or stretching out by the fire, these tales shine brightly any day of the year. The Sunny Side offers the perfect chance to rediscover this forgotten classic by one of our most cherished authors.

“Dear Myra,” wrote Simpson at the beginning of the year–“I have an important suggestion to make to you both, and I am coming round to-morrow night after dinner about nine o’clock. As time is so short I have asked Dahlia and Archie to meet me there, and if by any chance you have gone out we shall wait till you come back.

“Well?” said Myra eagerly, as I gave her back the letter.

In deep thought I buttered a piece of toast.

“We could stop Thomas,” I said. “We might ring up the Admiralty and ask them to give him something to do this evening. I don’t know about Archie. Is he–”

“Oh, what do you think it is? Aren’t you excited?” She sighed and added, “Of course I know what Samuel is.”

“Yes. Probably he wants us all to go to the Zoo together … or he’s discovered a new way of putting, or–I say, I didn’t know Archie and Dahlia were in town.”

“They aren’t. But I expect Samuel telegraphed to them to meet him under the clock at Charing Cross disguised, when they would hear of something to their advantage. Oh, I wonder what it is. It must be something real this time.”

Since the day when Simpson woke me up at six o’clock in the morning to show me his stance-for-a-full-wooden-club shot I have distrusted his enthusiasms; but Myra loves him as a mother; and I–I couldn’t do without him; and when a man like that invites a whole crowd of people to come to your flat just about the time when you are wondering what has happened to the sardines on toast–well, it isn’t polite to put the chain on the door and explain through the letter-box that you have gone away for a week.

“We’d better have dinner a bit earlier to be on the safe side,” I said, as Myra gave me a parting brush down in the hall. “If any further developments occur in the course of the day, ring me up at the office. By the way, Simpson doesn’t seem to have invited Peter. I wonder why not. He’s nearly two, and he ought to be in it. Myra, I’m sure I’m tidy now.”

“Good-bye,” said Myra lingeringly. “What do you think he meant by ‘as time is so short’?”

I fled down the stairs into the street, waved to Myra at the window … and then came cautiously up again for my pipe. Life is very difficult on the mornings when you are in a hurry.

At dinner that night Myra could hardly eat for excitement.

“You’ll be sorry afterwards,” I warned her, “when it turns out to be nothing more than that he has had his hair cut.”

“But even if it is, I don’t see why I shouldn’t be excited at seeing my only brother again–not to mention sister-in-law.”

Archie and Dahlia came first. We besieged them with questions as soon as they appeared.

“Haven’t an idea,” said Archie, “I wanted to bring a revolver in case it was anything really desperate, but Dahlia wouldn’t let me.”

“It would have been useful too,” I said, “if it turned out to be something merely futile.”

“You’re not going to hurt my Samuel, however futile it is,” said Myra. “Dahlia, how’s Peter, and will you have some coffee?”

“Better have some more,” I suggested, “in case Simpson is merely soporific. We anticipate a slumbering audience, and Samuel explaining a new kind of googlie he’s invented.”

“It’s a raid on the Begum’s palace,” explained Archie rapidly. “Dahlia decoys the Chief Mucilage; you, Thomas, drive the submarine; Myra has charge of the clockwork mouse, and we others hang about and sing. To say more at this stage would be to bring about a European conflict.”

“I bet he’s having us on,” said Thomas gloomily, as he stirred his coffee.

There was a hurricane in the hall. Chairs were swept over; coats and hats fell to the ground; a high voice offered continuous apologies–and Simpson came in.

“We’re all here–thanking you very much for inviting us,” I said. “Have a cigar–if you’ve brought any with you.”

Fortunately he had brought several with him.

“Now then, I’ll give any of you three guesses what it’s all about.”

“No, you don’t. We’re all waiting, and you can begin your apology right away.”

There was a moment’s silence … and then Archie got up.

“Good-bye,” he said to Myra, holding out his hand. “Thanks for a very jolly evening. Come along Dahlia.”